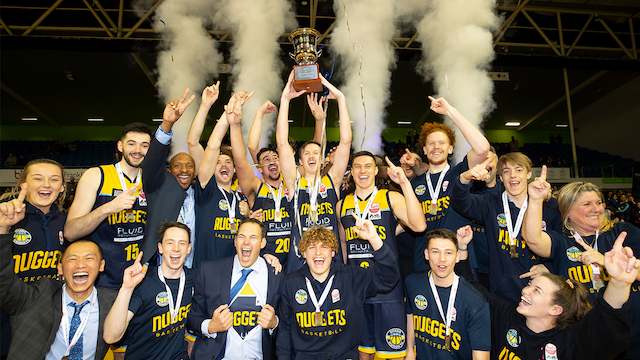 IN what was the culmination of an action-packed month and a half of basketball, the events that ensued in this season’s Grand Final between the Otago Nuggets and the Manawatu Jets, in particular the final minutes, fittingly rounded out the NZNBL this year as a whole as the Nuggets clinched a two-point victory (79-77). Due to this, it concludes Draft Central’s Top 10 Moments at the number one-spot.

Otago had defeated the Jets in their previous four encounters, meaning Manawatu entered the Grand Final as the underdogs. But for Tim McTamney and his side, all prior meetings were irrelevant and one win on the night could crown them NZNBL champions.

It only took a few seconds for the Jets to get their squad going, as Hyrum Harris dunked the ball with two hands, which was quickly followed up with a layup from the league MVP in Thomas Vodanovich. Fortunately for Otago, the experience and calmness from veteran teammate and Defensive Player of the Year, Jarrod Kenny, the Nuggets hit back with a couple of baskets of their own, slowing the momentum of the Jets.

Limited opportunities would present themselves to both teams in the opening period, but the Jets were smart enough to attack the rim early on, edging out a slight two-point lead heading into the first intermission.

An unexpected turn for the worst had the Nuggets on the back foot for the majority of the second quarter. Jordan Ngatai, Otago’s number one draft pick and Brent Matehaere’s go-to man, had run into early foul trouble and sat out for most of the second quarter meaning Otago’s secondary unit had to step up.

While Manawatu outscored the Nuggets in the second 24-22, Ngatai and Kenny gained extended periods of rest, as their bench players limited the Jets’ ability to score. Additionally, their bigs in Jordan Hunt and Kane Keil made their presence known, as they pulled down a number of rebounds to convert on numerous second chance opportunities. Furthermore, terrific ball-movement from coach Matehaere’s role players kept his side in the contest, culminating in a corner three for Richard Rodger to tie the game with few minutes to play in the first half.

In a first half that saw eight lead changes, there were not many things that the final was missing to make it a great game, but the main concern for Manawatu was their inability to capitalise on Otago’s turnovers (14 in the first half).

The combination of Hunt and Keil injected a sense of composure into their side, as the frontcourt duo strung together a pivotal 10-0 run. The points swing in favour of the Nuggets was quickly upended, as Kalib Mullins’ three-pointer out of the timeout got the Jets’ bench on their feet. Shortly before the final break, late field goals from Harris and Jayden Bezzant re-secured the advantage for Manawatu, as the Jets held onto a flimsy three-point lead with 10 minutes still to play.

Re-energised and raring to go, Ngatai opened up the fourth with the initial points of the stanza and after Joshua Aitcheson and Keil knocked down their third triples of the contest each, the Nuggets helped themselves to an 11-0 start to the fourth quarter, blowing the game out of the water. But the triple-threat of Vodanovich, Harris and Bezzant did not back down, gradually grinding away at the deficit throughout the final term. Luckily for Manawatu, they whittled the Nuggets’ lead down to just three points with over the two minutes left to play in the Grand Final.

As the intensity and the pressure started to grow for both sides, each basket started to feel like two, and Ngatai who had played limited minutes up to this point had a couple tricks up his sleeve. The Tall-Black and New Zealand Breaker penetrated the lane for another signature right-hand jam turning Trusts Arena into a frenzy. But, back-to-back buckets from Bezzant made the crowd hold their breath a little longer, as the Jets trailed by just one point.

With 33 seconds left on the clock, a Hunt shot-clock violation handed the ball back to Manawatu for the final possession and a chance to win the closing game of the season. However, as Harris drove down the corridor for the right-hand layup, Ngatai swooped in from the side, pinning the shot against the backboard with the game-saving block. A moment for Otago’s supporters to cherish for the rest of their lives.

After Aitcheson was intentionally fouled following regaining possession of the ball, the 22-year-old had a chance to ice the game. After missing one of his free-throws, the Jets chose not to call a timeout, meaning that Nelson Kirksey’s shot from half court on the buzzer was the last gasp for the green and white.

Sailing through the air for what seemed like an eternity, the ball clang off the left side of the rim as the Otago Nuggets claimed their first NZNBL title in franchise history, capping off what was a fitting way to end the most unique and possibly most controversial campaign in the NZNBL’s history. For this, it deserves the top-spot in Draft Central’s Top 10 Moments of the season.