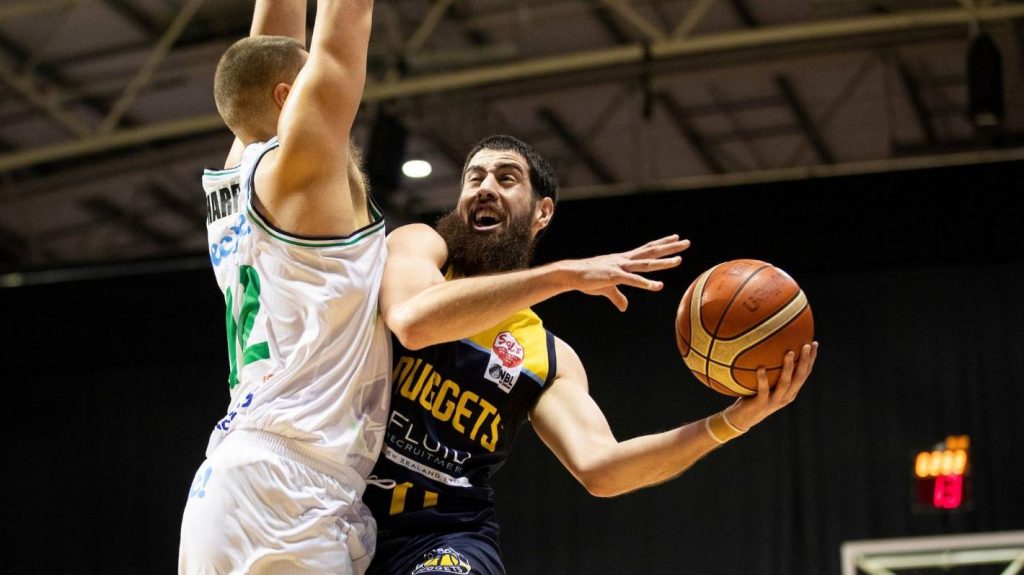 THE New Zealand National Basketball League (NZNBL) 2020 season has ended in a thriller, with the Otago Nuggets clenching their first ever Championship title, in an exhilarating 79-77 conclusion to the campaign over the Manawatu Jets. The contest saw many lead changes and scoring runs and could only be separated by a missed three-pointer at the buzzer with Brent Matehaere and his boys heading back to the South Island with an extra piece of silverware.

This year’s NZNBL Grand Final was a matchup between the two undisputed top teams all season long, but the Jets had a massive chip on their shoulder, as they were yet to defeat the Nuggets in their four prior contests. But the green and white looked to their key players to have a noticeable impact on a Nuggets squad that had yet to face adversity up to this point of their campaign.

It was Manawatu with the explosive first punch as Hyrum Harris slammed down the two-hand jam just mere seconds after the opening tip. This was then followed up with a layup from Thomas Vodanovich, as the Jets stunned Otago within the opening sequences. The experience of Jarrod Kenny and the range of Joshua Aitcheson quickly settled the nerves amongst their side, with a couple of field goals in what would be an adrenaline-filled opening term.

While both sides continued to trade baskets in the initial minutes, Manawatu maintained a slight edge, as they got to the rim fast and early on dribble penetration and fast break offence. The second half of the first quarter entailed a scrappier brand of basketball, as both teams struggled to find their targets. This trend was abruptly bucked after a strong second chance bucket from youngster Akiva McBirney-Griffin, after almost three minutes without a made basket from both sides, cutting the deficit to one point, 13-12.

Aitcheson’s lucky drop from three-point range and a putback-layup from Nelson Kirksey concluded proceedings in the first period, with the Jets held a fragile 17-15 lead thanks to their defensive pressure. Otago’s nine opening-quarter turnovers and Manawatu’s six steals created what seemed like a lop-sided first 10 minutes, but Aitcheson’s two threes were keeping the Nuggets within striking range.

Matehaere’s bigs Jordan Hunt and Kane Keil came through with a couple buckets to lead off the second, quickly handing the side the lead while appearing to have a new level of calm. But, back-to-back layups for Vodanovich quickly reminded spectators why he was named the league’s Most Valuable Player.

Early foul trouble for Jordan Ngatai and an extended rest period for Kenny early in the second quarter, saw Otago’s second unit display some terrific ball movement. The main highlight of this was a well-executed corner three by way of Richard Rodger. A similar story to the first, the Jets maintained a slight lead heading into half-time and following an And-One from Harris with less than two minutes remaining, it seemed Manawatu would inherit the momentum. But, Keil’s three to answer back with 90 seconds to go undid most of that.

In a half that saw eight lead changes and a halfway deficit of just four points (37-41), the NZNBL’s final game of the season had it all. But the main talking point of the game to this point was Ngatai’s lack of court time through 20 minutes. The number one draft pick had only seven minutes and 46 seconds on the hardwood, which when coupled with Otago’s 14 giveaways, was slightly worrying for Tim McTamney’s side that they were not further ahead.

Vodanovich and Kirksey led the way on the scoreboard for Manawatu with 11 each, whereas Hunt and Keil contributed 11 and 10 points for the Nuggets in a first half that saw a different story of play from each squad. With Ngatai making his return in the second half, Otago had an air of composure surrounding them, kicking off the third period with a fast-break layup to Hunt a minute and a half in. As well as Keil knocking down the mid-range jumper shortly after.

The two players helped the Nuggets to a remarkable 10-0 run, which was capped off by Ngatai’s first bucket of the game leading to a Jets timeout to try and stall the Minor Premier’s confidence.

Manawatu’s team huddle worked momentarily, as Kalib Mullins knocked down a triple to get the Jets bench on their feet. The rest of the third period remained relatively level-headed, with Manawatu grinding their way back into a one-possession game and eventually back into the lead credited to Vodanovich’s second three of the game, putting the score at 51-50.

Late buckets from Harris and Jayden Bezzant helped the Jets re-secure the lead for the final break, leading 55-52 with the final stanza still to be played and neither team really gaining a real upper hand on one another.

Ngatai’s quarter-opening layup and Aitcheson’s third three of the contest gifted the lead back to Otago, and Keil added insult to injury with a third three of his own. An And-One from Ngatai rounded out an 11-0 run for the Nuggets blowing the game out of the water two and a half minutes into the final period.

However, over the next five minutes, the combination of Vodanovich, Harris and Bezzant brought the deficit back to as little as three points with just over two minutes left in the game. But, another signature right-hand jam from Ngatai held off the Jets a while longer in an event filled final two minutes. A couple buckets from Bezzant brought Manawatu back from the dead with less than a minute to go making the score 78-77, and after Hunt conceded a shot-clock violation with 33 seconds left for Otago, the Jets had the chance to win the game with one more field goal.

But Ngatai had other plans, after pinning Harris’s layup to the backboard on a game saving block with 29 seconds left. After a couple of intentional fouls, Aitcheson’s single made free-throw put the Nuggets up by two.

Not calling a final timeout, the last second half court heave from Kirksey would hit the left side of the rim to end the final play of the season, as the Nuggets held on for a hard-fought 79-77 win. After the two-point triumph, the reality had set in for Otago knowing that they had won their franchise’s first ever NZNBL title.

In a game that saw both teams earn every single basket, neither side was able to crack 50 per cent shooting, but the difference proved to be Otago’s range as they knocked down 10 triples over the four phases of play compared to Manawatu’s six. Another glaring difference in the statistics was the rebounding totals, with Otago earning a plus-13 on the boards (48-35).

Despite Manawatu forcing 23 turnovers from the Nuggets, it was Otago that capitalised on their chances, earning 20 points from turnovers, five more than the Jets.

After an honourable 21-point and seven-rebound performance, it was only fitting that Jordan Hunt was awarded Finals MVP honours. Meanwhile, Aitcheson had himself a season-best performance of his own, amassing 16 points off of four threes and six rebounds.

Despite limited minutes with just 11 points and eight turnovers, Ngatai still made valuable contributions with six rebounds and four assists. Whereas, Kenny had an all-around night with six points, seven boards and eight assists.

Another MVP-calibre performance from Vodanovich (24 points, 10 rebounds and four steals) was not enough to get his side over the hump. Nevertheless, another great night from Harris (19 points, 12 rebounds, four assists and three steals) rounded out a prolific season on the whole for the two New Zealanders.

In what was a top-to-bottom job from the beginning of the season, it was certainly an entertaining finale to the NZNBL for 2020 and after receiving his championship medal, Coach Matehaere credited his team for their tremendous finish to the season.

“To my guys, you wouldn’t have seen it on television because we were sitting behind a screen, but on Draft Night… oh what a night,” reminisced the Coach of the Year.“ I was smiling all the way through [picks] one to 12 or one to 84. Kia Ora boys, this is our moment.”