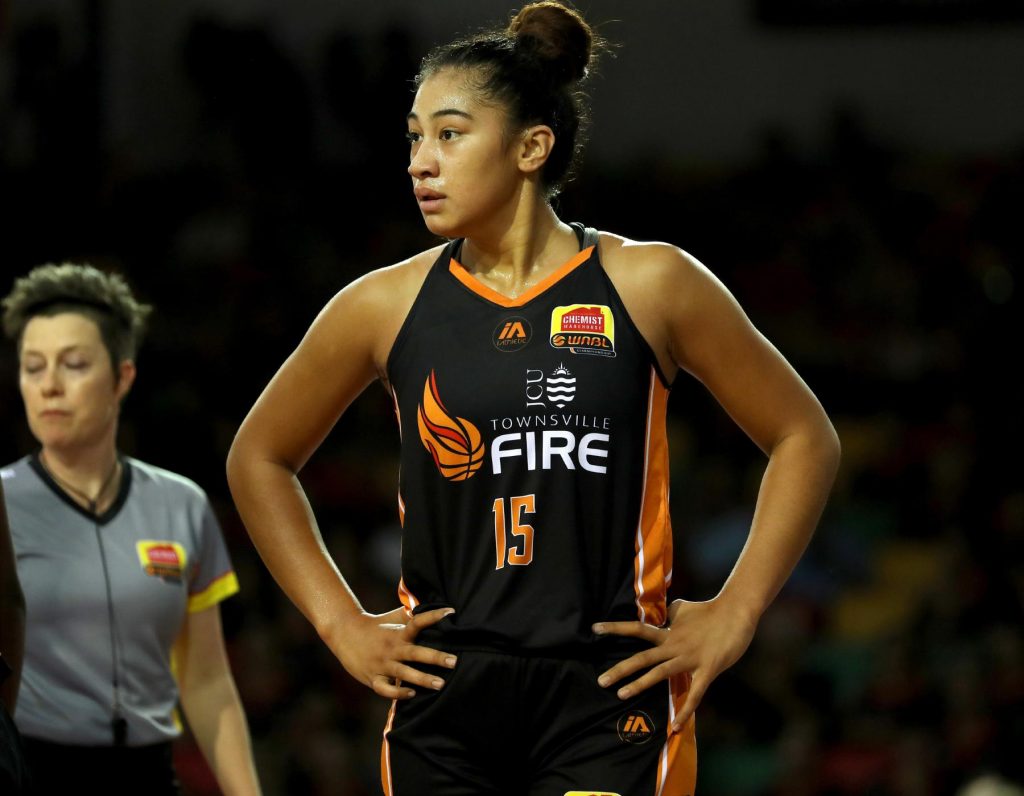 IN the pool of up and coming young talent rising through the WNBL ranks, Townsville Fire’s Zitina Aokuso sits at the top in terms of her dominance and ability to impose herself on the basketball court. The 21-year-old, who is making her way towards the tail end of recovering from a devastating anterior cruciate ligament (ACL) injury, is more eager than ever to get back out onto the court and show the Women’s National Basketball League (WNBL) what she has to offer.

“Rehab has been great,” Aokuso said. “There’s been tough moments, but knowing in the end, it’ll all be worth it,” she added.

With the WNBL still months away, none are working harder than Aokuso to get their bodies to peak fitness in preparation for Round 1. Working alongside friend and personal trainer Brent Gorris, the Penrith-born forward/center has had to adapt her training regime, given the COVID-19 restrictions in place.

“I’m currently seven months post-surgery,” Aokuso said. “I’ve started running which is great and I’m able to do more on-court stuff,” she added. “But having no access to basketball courts or parks, I’ve had to adjust to a basketball hoop in the driveway to shoot around… and having no access to cardio equipment, I’ve had to adapt to outdoor cycling and home-based pool sessions.”

All these measures that have been taken by Aokuso have been challenging to the WNBL youngster, but missing out on last season has provided all the motivation in the world for her on the road to recovery.

“Being on the sideline last season was one of the toughest things I’ve ever had to do,” she said.

However, playing the part of the team motivator was a role Aokuso seemed to embrace throughout last season, often dancing on the sideline, providing positive energy or giving advice to her teammates.

“The main takeaways from an off-court perspective is that I’ll never take the opportunity to do the thing I love and being able to be active for granted. But, knowing I couldn’t be on the court, I managed to find ways I could still stay involved,” said Aokuso.

Prior to Aokuso’s injury, the 195cm-tall prospect made a remarkable impact down in Victoria during her time at the Geelong Supercats, alongside the likes of WNBA draftee Ezi Magbegor and WNBL veteran Sara Blicavs. Completing a success-filled season in the NBL1, despite being knocked out in the grand final against the Kilsyth Cobras, Aokuso averaged 15.9 points, 8.6 rebounds, 2.4 assists and 1.1 blocks per game in what was nothing short of an impressive stint.

“To me Zitina is one of the most exciting talents in the WNBL. She is a great person and a lot of fun to be around,” Seebohm said. “I think even though she has struggled being out injured, this is going to be great for her future development. This situation has taught her the value of hard work and resiliency, and I believe she is going to return a much fitter, stronger and skilled player. There’s a lot of reasons to be excited about Zitina’s future in our league,” Seebohm said.

While the Fire did not find a huge amount of success in the 2019/20 season, finishing their campaign at the bottom of the standings with a record of five wins and 16 losses, Aokuso is excited to get the Queensland-side back to championship form.

“We weren’t too happy with how we went last season, so we’re looking forward to having a great pre-season and we are hungry to compete for a finals spot,” Aokuso said. “I think creating a culture we can be accountable for and to live by during the season and then being able to create ways that complement the team, is the way we’ll get the best outcome,” she added.

While Aokuso says she is taking it step-by-step, she is also aware that a possible Opals selection is a real chance, but for now, she is keen to see how the Fire squad is set to stack up, a squad that everyone should keep an eye on.