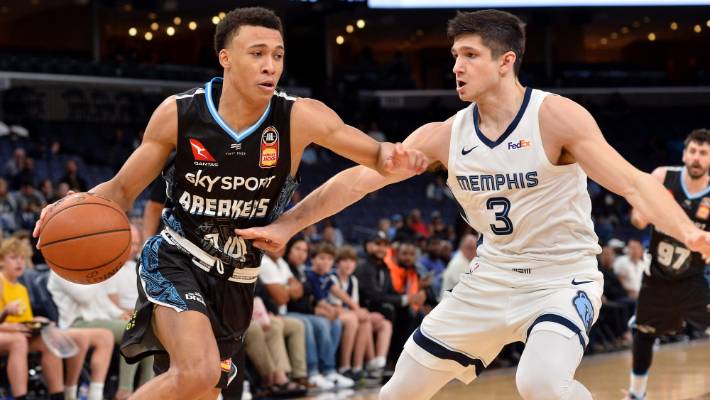 NEW Zealand Breakers youngster, RJ Hampton has shown flashes of what could be, if he continues on this trajectory and develops to his full potential. He already has an impressive highlight reel and definitely has the capability to be a future basketball star. He is quick on his feet, able to dart around the key so fast that NBA players for the Thunder and Grizzlies get crossed up, giving Hampton a free lane to lay it in. He is so agile that he makes stagnant centres move all the way under the basket for an easy two.

Standing at 196cm and 85kgs Hampton can pull out illusive spin moves, fast-break finishes, reverse layups and riveting blocks.  Hampton’s rookie season in the National Basketball League (NBL) was filled with glimpses of elite-level stardom. Hampton’s best asset by far is his speed. He can break down defences off the dribble, change direction on a dime and shift his defender any way he chooses. He has shown all of this and more, from a season he came into as an 18-year-old. That is why the expectations for Hampton’s career are so high after a season averaging 8.8 points, 2.4 assists, 3.8 rebounds. Hampton was an integral asset for the New Zealand Breakers and played his role each time he stepped out on court.

Throughout the 2019/20 season Hampton was excellent in coordinating the pick and roll on offence – something most rookies take years to master while also showcasing his play making abilities. He has good instincts about what to do with and without the ball and has taken some important strides in his ability to defend. When you consider he just turned 19 years old, it only enhances his stock. Add on to that the experience he accumulated from winning two gold medals for Team USA and Hampton has undergone an extensive learning experience already. He has proven his ability to evolve in high pressure circumstances and is always willing to take on advice which will go a long way in extending his career.