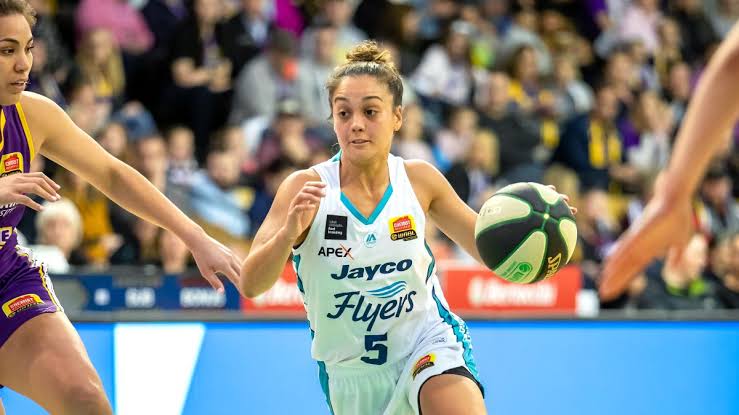 THE Southside Flyers went into the start of last season as heavy favourites, which became an accurate prediction walking away with 17 victories from the home and away season. In their inaugural season since being rebranded, Southside quickly cemented themselves as the team to beat.

As the two-game sweep by the Canberra Capitals to the Flyers is common knowledge, it adds another layer of motivation to the title pursuit of Cheryl Chambers’ squad – and that is a layer that the seven other WNBL sides should brace themselves for. In a team that contains perhaps the most talented roster in WNBL history, given their calibre of players both domestically and internationally, it will be hard for any side to topple what is a complete squad both fundamentally and skilfully.

Off the bat, it is hard to begin this article without first noting the added benefits that WNBA-star and former WNBL champion Liz Cambage offers to the Flyers. The 203cm-tall “Ace” provides an unprecedented and unique presence around the rim at both ends, and in her most recent professional season with Las Vegas in 2019, Cambage averaged 15.8 points, 8.1 rebounds and a block and a half per game.

A close friend of Cambage and the current captain of the Australian Opals, Jenna O’Hea will once again lead the Southside Flyers into another season, this time with a title-sized chip on her shoulder. O’Hea remains a key figure in Australian basketball shooting at an incredible clip of 48.6 per cent, while maintaining 13.7 points, 5.8 rebounds and 3.9 assists per game in what was a terrific season.

Backing up their captain in the team’s backcourt will be two more Opals in Bec Cole and Leilani Mitchell – easily the deepest backcourt duo throughout the WNBL in terms of ability and durability. Both stars of the game, Mitchell and Cole will look to add another impressive campaign to their resumes after both inherited splendid numbers last season. For Mitchell, her stat line would read 15.7 points and 5.2 assists, while converting on 42.3 per cent of her three-point attempts and 92.5 per cent from the free-throw line. For Cole, she capped off her season averaging 17.3 points, four assists and 3.6 rebounds.

Providing further energy on the court are Sara Blicavs and her sister-in-law Stephanie Blicavs, as well as dual-sport superstar Monique Conti. In addition to these three are secondary-unit standouts in 2012 WNBL champion Aimie Clydesdale and WNBA/WNBL champion Rachel Jarry, where both will be required to step up constantly in aiding the starting five, as the condensed season will most likely call for more bench minutes.