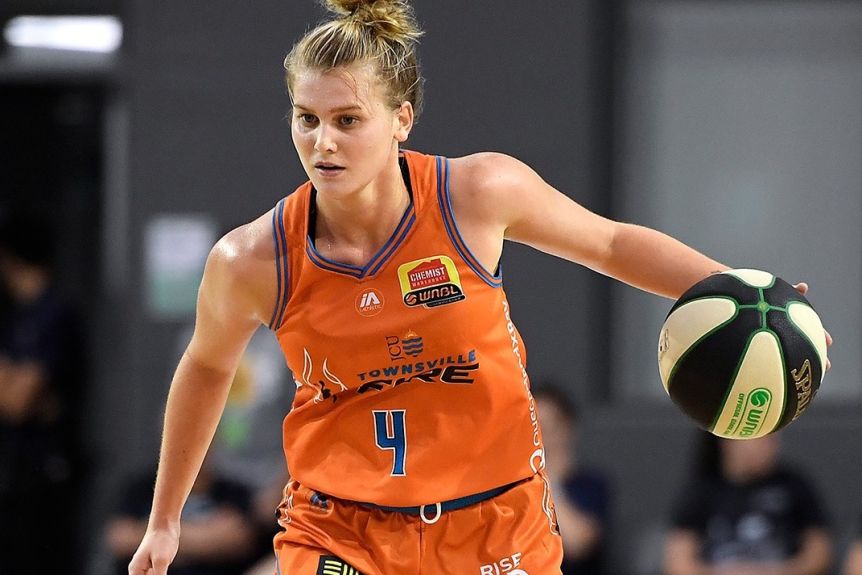 BESIDES being the most improved team in WNBL20 by a country mile, this season’s hosts, the Townsville Fire performed at an exceptional rate over the entire six weeks, culminating in two All-WNBL team selections, a Coach of the Year, a Sixth Woman and a Youth Player of the Year recipient, as well as a Grand Final opportunity. After receiving the wooden spoon at the start of this year, the Fire improved at a rapid rate and despite missing out on the final piece of silverware will take plenty of positives out of their campaign.

After a busy offseason to say the least, a new look Fire squad took the floor in Mackay during mid-November, to commence the long-awaited season with a determined mindset. This was shown against the Perth Lynx in Townsville’s season-opener as the hub hosts ran away with a 25-point triumph. But it did not take long for the Fire to realise that this season’s competitors were not to be taken lightly, losing their second contest of Round 1 to the defending champion Canberra Capitals (67-78).

Round 2 of the season fixture for the Fire proved to be a pivotal point in the campaign for head coach Shannon Seebohm and her squad, as they had to work their way through a four-game week. After a successful three-point result over the Sydney Uni Flames, Townsville got to test their mettle against the WNBL’s top-contender in the Southside Flyers, but to no avail going down to the league’s benchmark side 89-101. Fortunately for the Fire, they performed well in their remaining games that week against both the Bendigo Spirit twice and the Melbourne Boomers, placing their record at five wins and two losses entering the middle portion of the season.

Going down again to the Flyers to conclude Round 3, Southside proved to be more than a nuisance as the season continued, with Townsville unable to find the solution to slow down the Flyers’ offence. While Seebohm and his side showed lapses throughout their season, it was their ability to repeatedly bounce back from negative results that helped in the long run.

A two-game split in Round 4 against the Lynx (75-84 loss) and the Capitals (84-71 win) put the Fire well within finals eligibility with the last round still yet to be played, but with a top-two seed still hanging in the balance.

Knocking off Adelaide Lightning in convincing fashion 95-66, Townsville now had the chance to steal the second seed in WNBL standings at the end of the season. To get to that goal, the Fire just scraped away with a six-point win over the Boomers and leapfrogged the Melbourne-based side in the process, nabbing the second-seed at the last possible moment.

The Fire found themselves face-to-face with a team they had yet to defeat during the season and one of the most talented domestic line-ups in Australian basketball history, Southside. That streak of defeats to the Flyers unfortunately continued for the Sunshine-State team, going down in the second semi-final of the day 93-106, meaning next up would be a win or go home preliminary final against the Boomers once more.

In a meeting drowned in defence, neither Townsville nor Melbourne would manage to accumulate over 65 points, as shooting efficiency was few and far between. Luckily for the hosts, they kept their noses in front for the majority of the encounter withstanding onslaught after onslaught from the Boomers. Eventually conquering Melbourne 65-62 and setting up the franchise’s first grand final in little more than three seasons.

For all of Townsville’s players, it was a dream come true to compete for a WNBL title in front of their home crowd at Townsville Stadium. But their final hurdle would be the most difficult to combat and overcome, given that the Fire had not been able to beat Southside in any of their three previous meetings throughout the campaign.

Despite having four players reaching double-digit totals in what was for the most part a tightly knitted affair, the Flyers’ marquee players made their presence felt. A near-perfect second half for the Flyers, as well as a performance to remember from Leilani Mitchell would be enough to silence their opponents 99-82 at the final buzzer, ending the Fire’s prominent season and redeeming themselves after last year’s Grand Final failures – breaking the hometown fans’ hearts in the process after a gallant year.

MVP-candidate, member of the All-WNBL First Team and new signing for Townsville, Lauren Nicholson reminded everyone why she is a force to be reckoned with averaging 18.9 points, 4.1 rebounds and 2.7 assists. Next to her is perhaps one of the biggest success stories this season for another new signing in Shyla Heal. Heal ended her WNBL20 with averages of 16.7 points, 4.9 rebounds and 3.4 assists and being named this season’s Australian Youth Player of the Year.

In a season that could have gone either way because of the major roster changes that were made before the season even began, Seebohm did an exemplary job alongside his coaching staff merging numerous personalities together to work as a collective unit. With Seebohm signing a two-year extension, the future possibilities for this Townsville side are limitless.