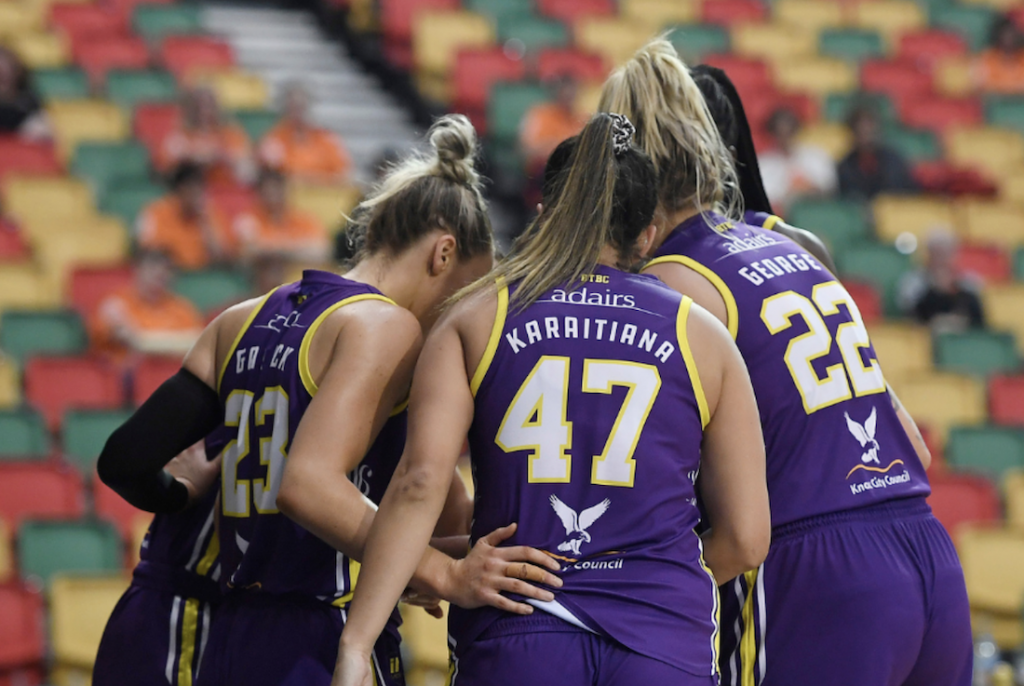 FOR the third consecutive season the Melbourne Boomers have been knocked out of the finals without reaching the big dance, even though head coach Guy Molloy and his formidable side exhibited a ferocious brand of basketball all season long, proving to be one of the WNBL’s toughest opponents. Along with their preliminary final defeat to the Townsville Fire, Melbourne’s title drought extends to a twelfth season.

Commencing season play with a superior 15-point win over their Sydney counterparts, the Sydney Uni Flames, the contest everyone one was waiting eagerly for was the first Melbourne Derby of the campaign between the Boomers and Southside Flyers.

Leading into the derby, Southside had already made a loud announcement to the league with a 42-point drubbing of the Bendigo Spirit in their previous outing, but Melbourne would unleash their season’s biggest weapon – their defence. Holding the Flyers to 72 points, the Boomers ran out with a convincing rout of their cross-town rivals by 17 and led into Round 2 at optimal form.

Melbourne’s undefeated start continued to three games after a hard-earned 62-56 win over the Perth Lynx, but the two-time defending champion Canberra Capitals put the first blemish on the Boomers’ record, thoroughly outperforming their foes by 17 points and holding them to just 50 points. Melbourne’s second round got worse as the Townsville Fire started to pick up numerous successful outcomes, defeating the Boomers 87-75 and weakening Molloy’s record to three wins and two losses.

The Boomers re-established their form in Round 3 with a 40-point win over the Adelaide Lightning, the only game of the week for the purple and gold, as they would relish a weeklong rest before undertaking a four-game Round 4.

To begin the week, Melbourne exacted their revenge on the Capitals (73-67) and cap off the season double over the Flames (86-64). The same could be said for the Spirit, going down to the Boomers by 32 (84-52) meaning that last season’s semi-finalists were one win away from an undefeated four-game week. This time it was not the case however, with Southside redeeming themselves from their early season encounter with the Boomers, edging out their old foes 94-79.

Two expected wins against the Lightning (76-55) and the Spirit (91-70) preceded a season-concluding loss to the Fire (64-70), all but confirming a postseason position, although not in the top-two following their loss to Townsville.

Being one of three teams to finish the season with a record of nine wins and four losses, it represented just how even things were at the top of the standings. Melbourne now had to batten down the hatches and get results given they had not earned a double chance by finishing third.

First up on the finals docket for Melbourne was Canberra, a team they split their two prior meetings with during the regular season. But it was plain and simple for the Boomers – defend, defend, defend, and that is what they did against the reigning premiers. Holding the Capitals to just 68 points, the Boomers ran away 10-point victors, ending the Caps three-peat bid and putting in motion a much-anticipated preliminary final against the Fire.

In a tightly contested clash that lasted all 40 minutes of play, Townsville continued to fend off a resilient Boomers outfit and with Shyla Heal running the show based on her remarkable 28-point performance, Melbourne just could not get ahead of the host-city side, losing out in the final seconds 62-65 and ending their season one win short of their main objective in making the Grand Final.

Once again it was the expected trio of WNBA champion Ezi Magbegor (15.4 points and 8.8 rebounds), Cayla George (14.2 points, 9.5 rebounds and 3.4 assists) and Maddie Garrick (10.5 points and 2.5 assists) that ran the show for Melbourne, however the addition of returning Boomer Tess Madgen (13.6 points, 6.2 assists and 5.4 rebounds) made Molloy’s core unit that much more potent throughout the entire season. But the late-season surge of Ashleigh Karaitiana (6.9 points and 1.8 rebounds) and consistency of Stella Beck (5.3 points and 2.5 assists) added another layer of depth to the WNBL20 roster. Furthermore, New Zealand Tall Fern Kalani Purcell (4.5 points and 3.7 rebounds) was able to add another successful season under her belt.

As a franchise, the Melbourne Boomers have an abundance of motivators amongst their ranks and because of the fact they have to wait another season to have a crack at that WNBL title once again, you can be dead serious that the club’s fire to get there is only burning brighter.