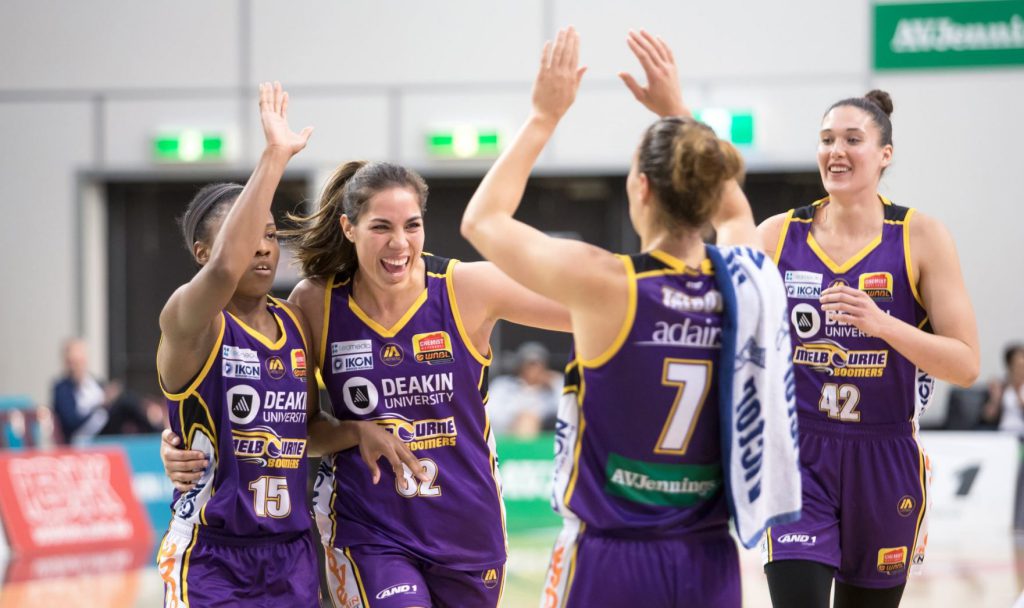 AS the finals edge closer, the top four teams battled it out in Round 14 for a home semi-final. The Boomers and Capitals were successful in getting the job done, while fellow contenders, Perth and Adelaide showed almighty fight over the weekend.

Adelaide put up another impressive performance as we begin to close out the season, defeating Bendigo by 11 points away from home. In the fourth, Bendigo had the front but was struggling to hold it. In the final seconds, Nia Coffey’s lay-up sent the game into overtime to give the Lightning a second crack. Coffey then went on to score eight points alone in overtime to seal the win. For the game, she scored 37 points and picked up 12 rebounds, four assists and two blocks. Teammate, Kayla Alexander also earned a double-double with 10 points and 11 rebounds, while Nicole Seekamp secured 11 points, nine assists and seven steals.For Bendigo, Nadeen Payne picked up 21 points with four rebounds, despite playing the least minutes from her starters.

After losing to Melbourne away last week, Perth has struck back at home for a comfortable 14-point win. Besides their weak third period (10 points), the Lynx came out guns blazing for most of the game, scoring at least 20 points in three of their periods. Melbourne was let down by its offensive plays. The Boomers shot well at 40 per cent, but only landed 24 and played mostly in close. Asia Taylor performed well again with 29 points and eight rebounds. Alison Schwagmeyer scored 14 points across 22 minutes, putting her at second for scoring despite the lowest playtime for the starters. For Melbourne, Eziyoda Magbegor scored 16 points with four rebounds, while Jenna O’Hea scored 12 points with eight rebounds.

Townsville suffered another loss at home against a strong UC Capitals side, sliding them further down the table. The Capitals came out hard in the opener, scoring 31 points to 15, and followed it up with 21 to 16 in the second. They slowed down in the second half, losing the third period, but tied 15 apiece in the final to rest on a comfortable lead. Leilani Mitchell starred for the Capitals with 20 points and seven rebounds. She hit five from nine three-pointers and only put up two inside the arc. Kelly Wilson produced seven assists with 12 points, while Kia Nurse dropped 14 with five rebounds. Townsville found a star in Laurin Mincy who scored 15 points, four rebounds and five assists. She hit five from nine shots and hit three of them from range.

Despite their impressive run in the last month at home, Adelaide was dealt another loss at the hands of Melbourne. The Boomers have given Adelaide their last two losses, which does not bode well as we head into finals. Adelaide was let down by a weak second half, despite coming back to win the first. Lindsay Allen played well with 22 points, two rebounds and eight assists, alongside Steph Talbot who scored 21 points with four rebounds and four assists. All of Melbourne’s starters scored over 10 points and were all fresh on their legs come the first whistle. For the Lightning, Coffey led once again. She picked up 26 points for the game, 12 attempts from the line, five rebounds and three blocks. Alexander was also pivotal with 21 points and nine rebounds.

The UC Capitals got the perfect game to finish off the round with a comfortable win over the Sydney Uni Flames. The Capitals broke out early with 30 points and won every period that proceeded it. They hit 40 from 81 shots, passed exceptionally well and beat Sydney on the rebound. Mitchell seems to be finding her groove with yet another big performance. The UC Capitals guard picked up 24 points, four rebounds and eight assists for the game, and hit six from 10 at range. Marianna Tolo followed close with 17 points as well, while Nurse and Kelsey Griffin were also important with 13 and 16 points respectively. For the Flames, Tahlia Tupaea led well, scoring 22 points.

In the fifth away victory of the round, Townsville toppled the Rangers by 13 points. The Rangers held a three-point victory heading into the third, but as with most teams this round, they gave it up and Townsville took off. Both teams played predominantly on the inside which found them giving up a lot of fouls and turnovers. Darcee Garbin and Micaela Cocks led from the front for Townsville with big performances. Garbin dropped 20 points with eight rebounds, while Cocks scored 16 points with six rebounds and two assists. Dandenong’s Rebecca Cole also had a solid game, earning 20 points at 61 per cent, while most of her team struggled to crack into double digits.