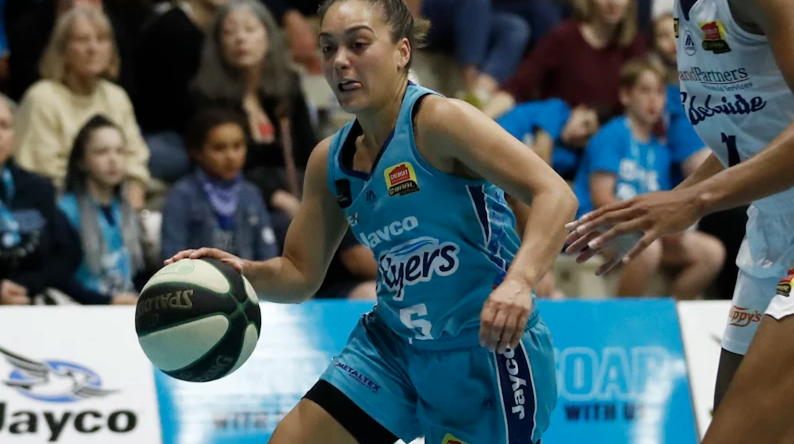 MINOR premiers, Southside Flyers are a win away from a 2019/20 Women’s National Basketball League (WNBL) Grand Final place after downing Adelaide Lightning by three points at Dandenong Stadium last night. Given Southside’s strength at its home court and Adelaide’s less-than-ideal road record, the Flyers were heavily fancied to move through to the season decider without too much fuss.

Unfortunately for the home fans, the visiting team was not on board with the script and came out all-guns blazing in the first term, piling on 25 points to 17 to race out to an eight-point lead at the first break. The Flyers made inroads back into the contest in the second term with a 17-14 quarter and drew within five at half-time. Needing a special effort in the second half, the Southside team that everyone had come to know returned to the court, powering its way to a massive 22-7 term, restricting the Lightning in every way possible to go from a five-point deficit to a huge 10-point lead at the final break. Adelaide was determined not to give up however, as the Lightning hit back in the final term, drawing within five points midway through the term, but the firepower of the premiership favourites gave the home team some breathing space. Leading by 10 points with less than four minutes on the clock, the Flyers looked home and hosed, but one last effort from the visitors resulted in them scoring eight of the last nine points to get within three, but ultimately fall short, 68-65.

Center, Mercedes Russell again stood tall for the Flyers, having a ridiculous game of 20 points and 19 rebounds, with an even spread of 11 defensive and eight offensive, while also picking up three assists and a steal in a clear best-on-court performance. She was not alone however, as Leilani Mitchell – who shot a crucial three midway through the final term to draw within five points – finished with 15 points, four assists, two rebounds and a steal. Rebecca Cole also reached double-figure points with 13, as well as six rebounds, four assists and four steals in a real team effort. Elsewhere, Anneli Maley‘s effort of the bench was strong, only recording four points, but having seven rebounds, a steal and block on the night. Sara Blicavs had a quieter night with nine points, but had five rebounds, two steals and an assist.

For the Lightning, Lauren Nicholson stepped up as one would expect from a player with her experience, finishing with 14 points and seven rebounds, while Stephanie Talbot (13 points, nine rebounds, six assists and three steals) was unsurprisingly Adelaide’s best, as Brianna Turner (11 points, nine rebounds, five blocks and two assists) was also strong. In terms of scoring, the other player of note was Chelsea Brook coming off the bench to contribute 11 points, four rebounds, an assist and a steal, while Nicole Seekamp had four points, but five rebounds and five assists.

With Southside holding a 1-0 lead in the three-game series, Adelaide will try and force a deciding third game if the Lightning can get up at home when the teams face off at Titanium Security Arena on Saturday night from 7pm.