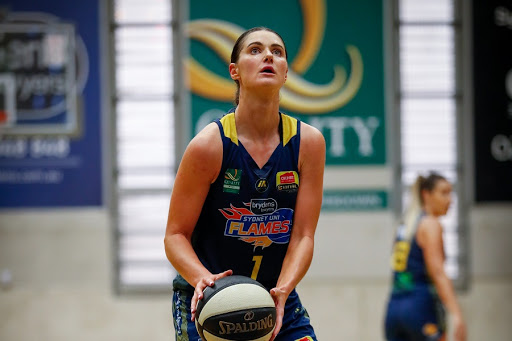 SYDNEY Uni was plagued by injury in season 2019/20 of the Women’s National Basketball League (WNBL), with the side suffering a number of season-ending injuries as the season went on. While the Flames still managed seven wins, they lost six of their last seven matches for the season to finish on a frustrating low.

After finishing the 2018-19 season with a 2-19 record, change was not just crucial, but it was imminent. First the Flames hired a new coach in Katrina Hibbert, while the most hyped addition to the squad was that of veteran Alice Kunek. It was believed that Kunek’s experience would be a key asset to the team’s success – it was, seeing her lead the team in scoring with an average of 19 points per game, playing with so much passion and ferocity, you could not keep your eyes off her. But her season was brought to an abrupt end suffering an elbow injury. Colleen Planeta was another new face for Sydney and was dropping nearly 16 points a game, until she followed suit with injury. With many more new players in Flames jerseys, unfortunately injuries would be a major theme for this season. However props to the fanatics of Sydney Uni, as they stood loyal, packing the Brydens Stadium game after game.

It was an injury riddled season starting from the opening round when Brittany Smart suffered a terrible calf injury. This would not deter the Flames’ spirits as the rest of the season started on a positive. Kunek was thriving in the new offence, and the duo of Planeta and Jess Kuster piled up the scoreboard averaging 15.7 and 13 points a game. But the injuries did not stop there as Planeta suffered an ACL injury in the win over Southside, forcing her to miss the rest of the season. At this point in the season, the Flames’ hopes of a playoff berth were still realistic, as they only had a six and eight record. But after Tahlia Tupea did her knee, then Kunek her elbow, the season seemed over. Even with Kunek’s devastating elbow injury, which is a tough pill to swallow for a 29 year-old, Kunek was granted WNBL All-Star Second Team honours for her impressive efforts across the season. Smart was able to come back and play the last seven games of the season nearly dropping 10 points a match, while having three games where she scored more than 18, but it was too little too late. The Flames finished the season second last in points scored (73.8 per game), last in rebounds (38 per game) and last in assists (15.4 per game).

If it was not for the injuries, maybe this team could have made some noise in the playoffs. If everyone can recover in time for next season, they just might. In Kuster’s first ever season in the WNBL, it seemed she had the hot hand every single match, shooting at 53.1 per cent from the field and 40.7 per cent from deep. Kitty Henderson will be someone to look out for next season, as she has improved notably with every game under her belt. Starting the season as a development player, Kitty moved her way up to an important bench player thanks to injuries, bringing a level of enthusiasm and ability to improve that any team would be lucky to have. The Flames seem to be putting more and more faith in gifted 16-year-old prodigy, Alana Goodchild. She might just be a name you want to remember. The Flames also say goodbye to their captain Sarah Graham, a veteran for 12 seasons in the WNBL across four different clubs. With all the injuries the Flames obtained, they seemingly lost the spark they came into the season with but have plenty to look forward to next season with the development of some young up and coming players.