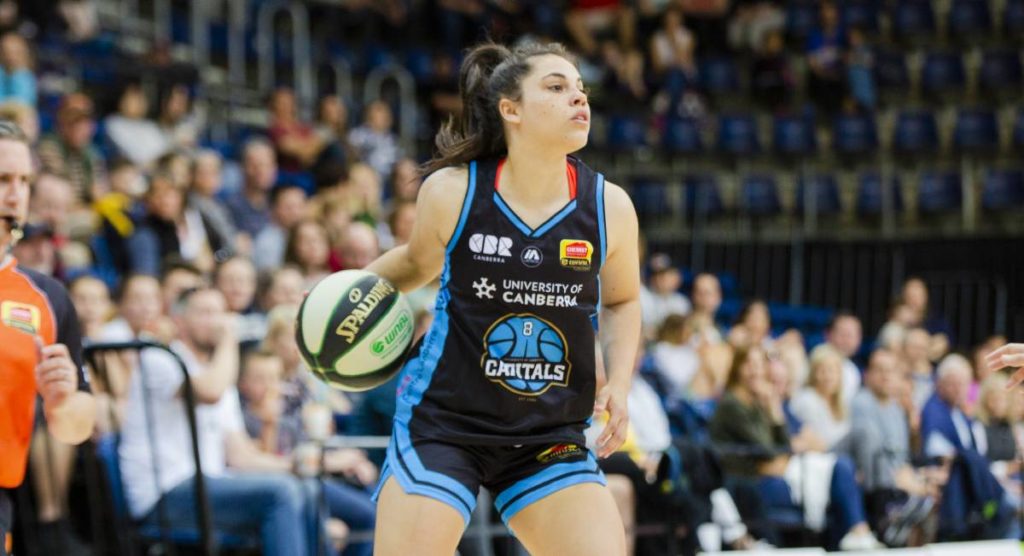 THE top-of-the-table Southside Flyers put distance between themselves and the second seeded Boomers, after edging out Melbourne by seven points in Dandenong, extending their winning streak to four. In terms of streaks, the Capitals increased their winning streak to six and Townsville snapped their losing streak of three games without captain Micaela Cocks, while losses by Perth and Bendigo lengthened their losing streaks to four and six.

The opening game of Round 8 saw the WNBL’s most and least in-form teams go head to head in Ballarat, as the Spirit were sporting a four-game losing streak and the Capitals stringing together five consecutive victories prior to Friday’s encounter. From the outset however, it was the Capitals that controlled the game, leading at every break and dominating in all facets of the game. UC took control on the boards as well, earning 10 more total rebounds compared to the Spirit which then transferred to a good scoring output from their starting five. Most impressively, scoring came from Kia Nurse who scored numbers in bunches, finishing with 32 points whilst shooting 7-10 from three-point range. She was assisted by Kelsey Griffin who put a double-double with 15 points and 12 rebounds, alongside Marianna Tolo and her 16 points. For the struggling Spirit, only three players managed to crack double digits with Tessa Lavey (17), Shyla Heal (15) and Gabrielle Richards (14) combining for most of Bendigo’s scoring. Nevertheless, the Capitals ran away with the game by 25 points extending their winning streak to six games hot on the heels of the Melbourne Boomers who sit second in the standings. Another loss was added to Bendigo’s record extending their streak to five with their next contest to come a couple days later against the Townsville Fire.

After suffering back-to-back losses for the first time this season, the Adelaide Lighting were looking to reclaim the title of victor against the Perth Lynx who were in the midst of a similar situation. Both clubs fought hard in what was a battle of strengths and weaknesses as Adelaide punished Lynx inside the key and Perth showed off their prowess from the perimeter. In the end it was the consistency of baskets from close range that won out as Brianna Turner compiled 24 points, 13 rebounds, five steals and five blocks as she put on her best performance of the season so far. With the help of Lauren Nicholson and her 21 points, the Lightning were able to pull away from Perth and earn the first victory of their double-header weekend, while also handing the Lynx their third consecutive loss. Performances worth noting from Perth entailed Imani McGee-Stafford’s double-double (14 points and 11 assists) as well as Katie Ebzery’s respectable 18-point performance where she shot 70 per cent from the field.

The Round 8 game of the week took place in Melbourne’s South-East as the league’s top teams did battle at Dandenong Stadium. Both the Southside Flyers and the Melbourne Boomers were enjoying sizeable winning streaks leading into their Saturday night clash, with both teams knowing that one of them had to end. Both sides shot the ball well and when shots did not fall, both the Flyers and Boomers were there to grab their misses. The main difference between the sides came down to free-throws, as the Flyers went 22-23 from the line compared to the Boomers who only managed 7-9. This combined with the Flyers elite starting five’s performance, enabled Southside to continue their winning streak to four games, whilst being the first team to reach ten victories and snap the Boomers’ three game winning streak in the process. Southside’s starting side combined for 83 of their 89 points, led by Jenna O’Hea who notched up 22 points and six assists in her side’s victory. Melbourne’s Cayla George was the Boomers’ leading points getter, while also grabbing eight total rebounds. Despite the loss, Melbourne needed to readjust quickly, as they had to take care of a Perth Lynx squad that was also keen for a bounce back win only 24 hours later.

After Adelaide’s hard-fought win over Perth on Friday night they had their sights set on going two games clear of .500, but in their way were the Sydney Uni Flames who needed to claw their way back into top four contention and a win against the fourth seed itself would be a good first step in achieving that. Colleen Planeta was once again the go-to woman as she dominated around the basket racking up 28 points and 12 rebounds, which was further bolstered by Alice Kunek’s 21 points. The performance by the duo helped facilitate the Flames to halt the Lightning’s intentions and finish off the game with a convincing 12-point triumph. Key scorers for the visiting Lightning were Brianna Turner, who accumulated 19 points as well as seven rebounds and Stephanie Talbot, who put up 18 points and seven rebounds. The Lightning’s loss put them back on a .500 record at five wins and five losses, whereas Sydney Uni now trail the Lightning in the standings by a game and a half as a result of Sunday’s victory.

The Townsville Fire who had up until Sunday, only won one of its opening eight games this season, looked to break that trend and come out victorious at home against the only other team in the competition that was performing worse than themselves, the Bendigo Spirit. With the Fire coming out successful in areas such as field goal percentage, assists and points from turnovers, Townsville was able to capitalise on their opportunities in front of their home crowd, which was desperate for a win. Led by Darcee Garbin, who finished with 27 points and seven rebounds, the Townsville Fire were able to hold off Bendigo for their second win of the season, winning the bout by double-digits. Despite Bendigo succumbing to their ninth loss on the season and cementing their place on the bottom on the ladder, Demi Skinner managed to take 26 points away from the contest. Townsville now hold a record of two wins and seven losses.

The Boomers were at-risk of slipping to third place behind the UC Capitals who had just won against Bendigo, so the home side knew of the increased importance of the contest. It was a scrappy contest with both sides failing to gain the upper hand early on. Individual performances, points from turnovers and calm nerves from the free throw line proved to be some of the separating statistics in the final game of the round with the Boomers holding the upper hand. Melbourne would outscore the Lynx 18-10 from the line, which would be critical in the side’s nine-point victory over Perth, retaining their rank as second on the WNBL Ladder, trailing only the team that had defeated them the day before. The individual performances from Madeleine Garrick and Sophie Cunningham who both finished with 17 and 15 points each helped to get the Boomers over the line to notch up their eighth win for the season. Garrick was accurate from the free-throw line nailing five from six. McGee-Stafford collected her second double-double for the weekend as she totalled 11 points and 11 rebounds alongside Alison Schwagmeyer who was the Lynx’s top-scorer with 13. The two losses for Perth over the weekend extended their losing streak to four, as they sit a game above Townsville in sixth place.