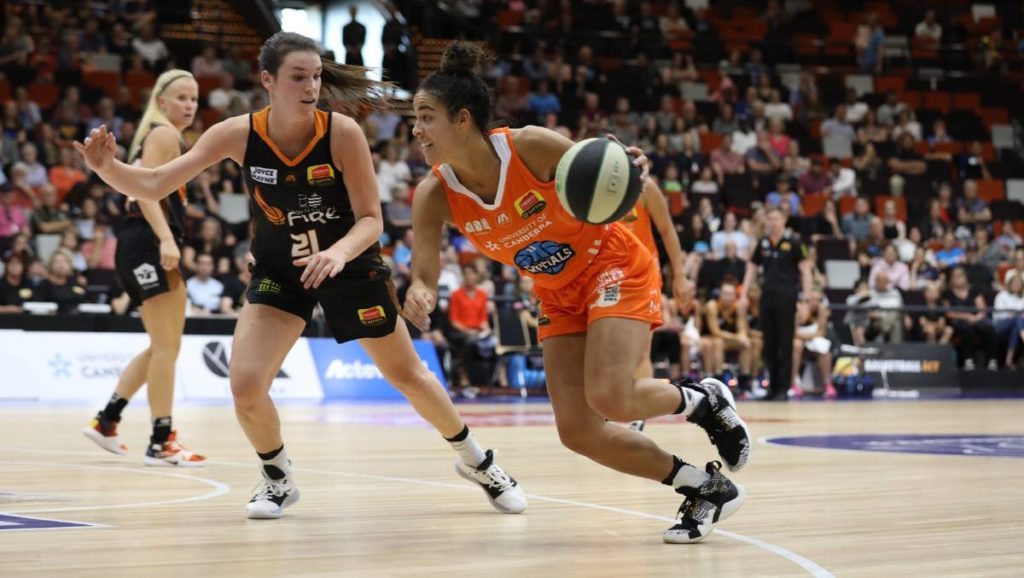 THE ladder leading Flyers came away from a successful road trip with big wins against Perth and Adelaide, while the Boomers made sure to get a win against Sydney Uni to keep in touch with Southside in their pursuit of the top spot. Whereas, the Caps extended their winning streak to five in their clash against the Flames and the Spirit dropped their fourth consecutive game.

The Sydney Uni Flames kicked off their double-header weekend in Bendigo with a hard-fought five-point win over the struggling Spirit. While the Flames have also been struggling to climb the ladder this season, Sydney Uni were able to come away with their third win of the season. Four of the top five scorers for the game wore Flames jerseys led by Jessica Kuster who tallied 23 points, 11 rebounds and a couple of blocks. Aiding her was Alice Kunek and Colleen Planeta who finished their games with 15 and 17 points respectively, but the title of main facilitator fell on the shoulders of Alex Wilson who put up 17 points, eight assists and six rebounds. For the Spirit, scoring performances could be found across the team, but the totals put up were nothing to speak too highly of. Bendigo who shot at a sub-par 37.0 percent from the field, only had one player who scored at least 15 points, that being Tessa Lavey who scrambled for her 16 points and 11 assists. The five-point win for the Flames would start their weekend off well leading into their second game against the Melbourne Boomers on Saturday. The loss for the Spirit extends their losing skid to four games slotting them in seventh spot.

The Southside Flyers continued their stellar form this season, earning their eighth win from nine games after defeating Perth by 14 points. Perth’s bench was able to make a considerable impact as they outscored the Flyers’ secondary unit 30-8, but Southside’s efficiency from the free-throw line (83 percent) and the field (45.6 percent) was enough to counteract the play of the Lynx. Rebecca Cole led the charge for the Flyers with 21 points, three dimes and four rebounds. Other scoring contributors for Southside included Mercedes Russell (16 points), Leilani Mitchell (15) and Jenna O’Hea (13). Alison Schwagmeyer led the points scoring for the Lynx with 16 along with five rebounds. Additionally, Katie Ebzery stood up throughout the match coming away with 14 points, four assists and eight rebounds. The win for the Flyers was the first of both their impressive performances over the weekend, preceding their clash with Adelaide on the trek back home. Whereas, Perth’s loss continues their average form this season signified by their 3-6 record thus far, placing them in fifth position.

A sizeable winning streak is rolling for the UC Capitals as their win against the bottom of the table Townsville Fire continued their winning run of form to five games. On paper the teams were very similar in offence and defence finishing with 35 rebounds. But what the Fire lacked in points around the basket, they made up for in second chance opportunities. The main difference in the game was accuracy, as the Capitals managed to shoot the ball at a 54 percent clip compared to Townsville’s 44 percent. The Caps, led by Kia Nurse and her 24 points, as well as Kelsey Griffin and her 27, knocked six three-pointers in as they were decisive in their victory against a poor shooting Fire outfit. For the Fire, Abby Bishop and Julie Vanloo combined for 43 of Townsville’s 78 points, as well as seven threes between the duo, but the lack of depth in the Fire’s lineup proved to be the downfall for the club that now sits on the bottom of the standings with a 1-7 record. The win for the Capitals ties them in second position with the Melbourne Boomers, who is also on a winning run at the moment.

Sydney Uni who were hot on the back of their victory against Bendigo on Friday night came into Melbourne looking to steal two Victorian wins in the span of a couple of days, which is something not many teams have done so far this season. The Boomers who have been a deadly opponent so far this season showcased why in the contest. Good ball movement led to high assist totals for the Boomers with 24 for the game compared to Sydney’s 17. In addition, a culmination of points from second chance, points off of turnovers and fast break opportunities for the home team, gave Melbourne the extra ammunition needed to secure the 12-point victory against a solid Flames outfit.  An impressive outing for Madeleine Garrick, who led the Boomers in scoring and three-pointers with 26 points and six bombs from behind the arch. Cayla George was also impressive across all non-scoring statistics with 14 rebounds and eight assists along with four blocks. In addition, young gun Ezi Magbegor notched up 20 points and five rebounds. For the Flames, Kunek was again on target as she pulled out 24 points with five rebounds. The win for the Boomers puts them two wins behind Southside, while extending their winning streak to three games. The Flames slide to sixth.

Down in Adelaide, the Southside Flyers extended their dominant run so far this season, after edging out the Lightning on their home floor and rounding out a successful double header weekend. The Flyers relied entirely on their starting five to get the job done, with no bench players scoring a single point. At the forefront of the scoring load was Russell, who finished her night with 24 points and 14 rebounds, capping off a spectacular individual weekend. Along with Russell, Sara Blicavs managed to grab a double-double with 20 points and 10 rebounds through 30 minutes of game-time. Whereas, Adelaide’s Stephanie Talbot tallied 25 points and eight rebounds along with a couple of assists in her efforts to keep the Lightning within striking distance. Lauren Nicholson, made her presence known recording a solid 13 points, five assists and seven rebounds for the home side, but ultimately the Lightning could not claw their way back, as the Flyers obtained their ninth win of the season and put the gap between themselves and the second placed Melbourne Boomers to two games. The Lightning from the loss fell back to .500, now sitting on four wins and four losses.