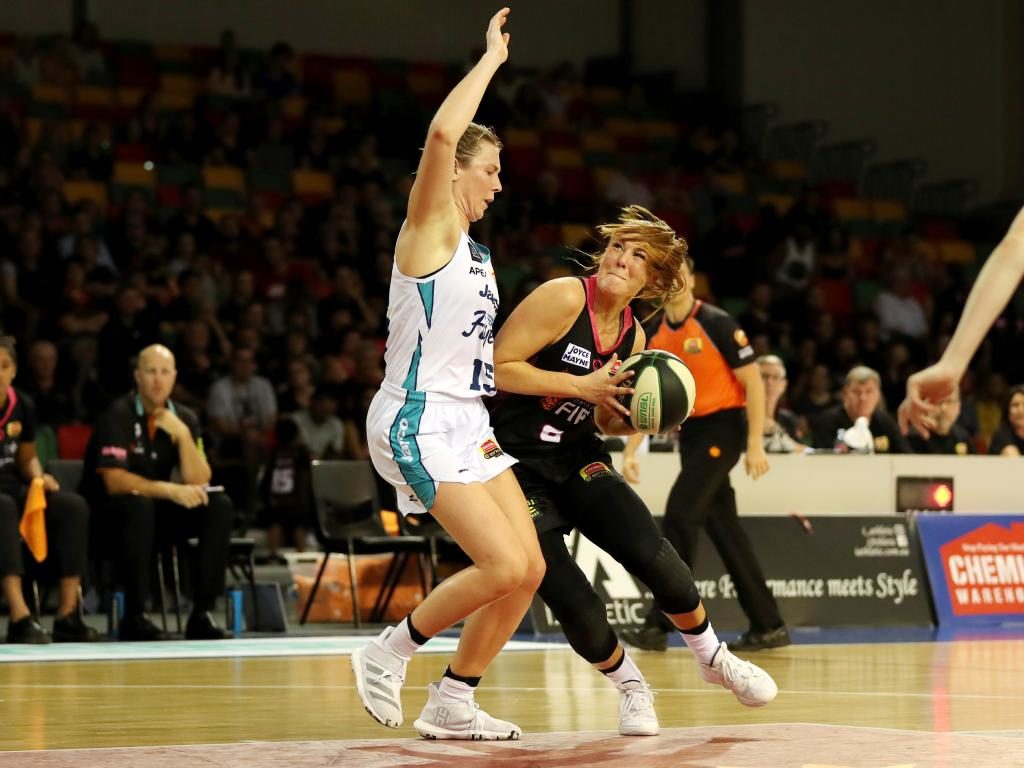 BACK-to-back wins over the weekend to Melbourne Boomers, and victories to Southside Flyers and University of Canberra (UC) Capitals meant the top three in the Women’s National Basketball League (WNBL) moved two games clear of fourth. The other game saw Perth Lynx keep their finals hopes alive with an important win over Sydney Uni Flames.

Melbourne secured a vital road win against fourth placed Adelaide Lightning to gain a bit of separation inside the top three. The Boomers trailed by three points at the first break, but hit back with a 17-8 second term, and went on with it from there, restricting the Lightning to just 30 points in the last three quarters, while piling on 57 themselves to run away with a 71-57 victory. Lindsay Allen was the top scorer with 20 points, six rebounds, five assists and one steal, while Ezi Magbegor picked up a double double in her best performance of the year with 13 points, 11 rebounds and two blocks. Cayla George (13 points, seven rebounds, four assists, three steals and three blocks) was superb, while Penina Davidson had 11 points and nine rebounds off the bench. For the Lightning, Nicole Seekamp sank 15 points, two rebounds and three assists, while Brianna Turner (10 points, 14 rebounds and three blocks) and Chelsea Brook (10 points, five rebounds) were the other two players who reached double figure points. Stephanie Talbot tried hard with seven points, nine rebounds, three assists and two steals, but ultimately the home side could not put enough points on the board.

Perth finally snapped its four-game losing streak with an important nine-point victory over Sydney Uni – the side it last beat all the way back in Round 1. The Lynx edged ahead in the second term after an even first quarter, but then added 23 points to 18 in the third to lead by 10 at the final break. The Flames hit back to cut the deficit back to nine, but it would not be enough in the end. Alison Schwagmeyer produced another stunning game, picking up a double double with 25 points, 10 rebounds, three assists and one steal to be best on court, while Katie-Rae Ebzery returned from Opals duties to post 20 points, three rebounds and three assists in the win. Ariel Atkins continued her good start to her WNBL career with 12 points, five rebounds, four assists and two steals off the bench. Maddison Allen was also strong with 12 points, six rebounds and two blocks. For the Flames, Colleen Planeta was the best with 16 points and nine rebounds, while Alex Wilson shared the top scorer billing with 16 points, three rebounds and nine assists. Lauren Scherf (14 points, five rebounds, four assists and two blocks) and Jessica Kuster (13 points, nine rebounds) were the other two key scorers for the home side.

Southside Flyers bounced back from their first loss of the WNBL season with a big statement over cellar dwellers, Townsville Fire. Sitting at opposite ends of the ladder, the Flyers piled on 30 points to 19 in the opening term, then proceeded to win all four quarters in a one-sided, dominant display. Never letting up, it was clear to see that Southside is one of the title contenders, producing such an effort on the road. Jenna O’Hea (21 points, seven assists and two steals) and Rebecca Cole (20 points, four rebounds, two assists and two steals) were the key scorers, while Mercedes Russell continued her dominant start to the season with an impressive 17 points, nine rebounds and two assists. It was hard to find the top player for the Flyers with Sara Blicavs also picking up a double double thanks to 12 points, 13 rebounds and four assists, while Leilani Mitchell had eight assists and three rebounds to go with her 13 points. Abby Bishop was the clear standout for the Fire with 20 points and eight rebounds, while Micaela Cocks (10 points, three rebounds and three assists) was the other player to reach double figures in what was a disappointing loss for the home side.

Rounding out a good weekend for the Boomers, Melbourne took home the points on the road against Bendigo Spirit in a 16-point win. The Spirit started strongly to lead by three points at the first break and half-time, before the Boomers took over to lead by the same margin with a quarter to play. They built on that momentum in the final term to post 24 points to 11 and run away with the contest in a margin that was not completely accurate of the game’s tightness. Allen was again the team’s top scorer with 17 points, four assists and two steals in the win, while Madeleine Garrick stepped up to contribute 12 points, six rebounds and two steals. Magbegor (10 points, seven rebounds and two steals) and George (10 points, six rebounds, six assists, two steals and two blocks) were also prominent across the board. For the Spirit, Abigail Wehrung was a lone hand in the scoring department with 13 points, as well as two rebounds and two assists, while Kelly Wilson picked up nine of her team’s 16 assists, though had seven of her side’s 27 turnovers. Rebecca Tobin was the dominant player off the boards with 15 rebounds to accompany her six points, four assists and two steals.

Reigning premiers, University of Canberra (UC) Capitals finished strongly at home to run over the top of Perth Lynx and maintain touch with Melbourne and Southside in the top three. The Lynx surprised the home crowd in the opening term to lead by a point at quarter time, before the Capitals piled on 23 points to 16 in the second term. Perth got back on top in the third to reclaim the lead by two points at the final break. Like any good side on the ropes, the Capitals found a way to breakthrough and eventually piled on the points in the final term, sinking 32 points to 12 to run away with an 18-point win in a game where – like the previous one – the final margin did not accurately reflect how close the game was. Kelsey Griffin was unbelievable with 19 points, 15 rebounds, three assists and two blocks, while Marianna Tolo (12 points, 10 rebounds, four assists and three blocks) also picked up a double double, Kia Nurse played her best game for the season in terms of overall impact and not just points, picking up 18 points, seven rebounds and six assists, while Maddison Rocci also impressed with 13 points, three rebounds and three assists. Coming off the bench, young gun Gemma Potter scored nine points and had two assists. For the Lynx, Lauren Mansfield scored a game-high 23 points, as well as five rebounds, four assists and two steals, while Schwagmeyer added another 19 points and seven rebounds to her season totals. Nadeen Payne (10 points, 10 rebounds) picked up a double-double, while Atkins had six points, five rebounds, three steals and three assists.