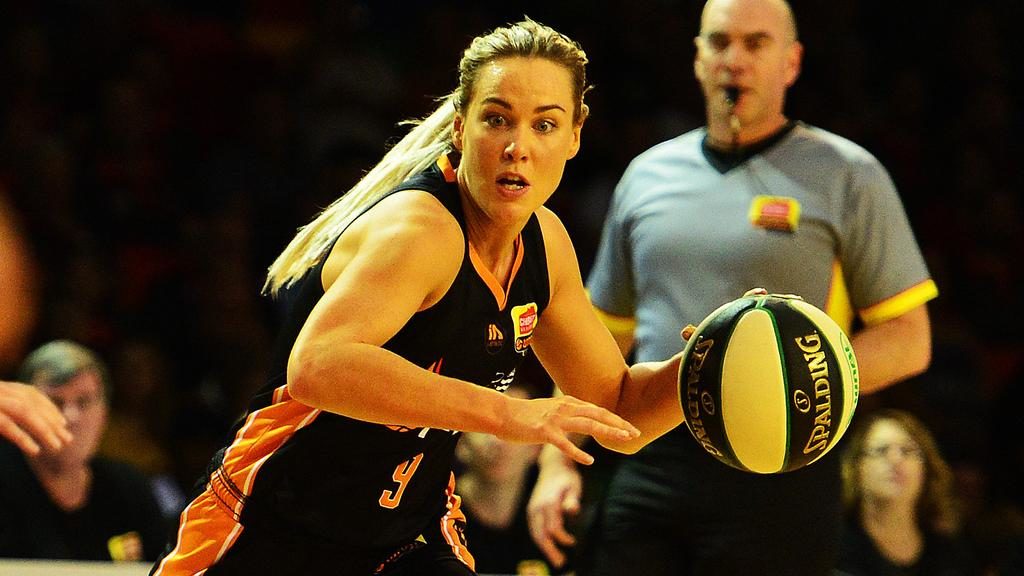 THERE was plenty of action in Round 4 of the Women’s National Basketball League (WNBL) with the Flyers flexing their muscles once again with a convincing 13 point while Townsville Fire registered their first win of the season in a hard-fought battle against Perth.

It was a massively spirited performance by Bendigo to get the points against Adelaide Lightning in what was a crucial game for ladder positions. The Spirit kept in touch with the top four thanks to the 13-point win, and won three of the four quarters, after levelling the first term. They restricted the Lightning to just eight points in the last term, in a dour affair, showing that the home side can play just as well defensively as they can offensively. Rebecca Tobin was magnificent off the boards with a double double with 12 points and 12 rebounds, as well as a couple of steals and blocks. Abigail Wehrung (16 points, three rebounds) recorded the most points for her side in the low-scoring win, while Demi Skinner (11 points, two rebounds) also contributed off the bench in what was a good night for the bench players, scoring 37 of the 67 points. It was a different story for the Lightning, with Adelaide not getting a point from its bench, instead with just four players posting up points on the night. Brianna Turner (21 points and 12 rebounds) picked up a double double, as did Stephanie Talbot (13 points, 10 rebounds), while Nicole Seekamp (nine points, seven assists and three rebounds) was solid.

Despite a somewhat sluggish start, there was no cause for concern from the reigning premiers as the University of Canberra (UC) Capitals exacted their revenge on their NSW/ACT rivals, Sydney Uni Flames, winning 91-66. The 25-point win was fairly comprehensive given the Flames had got the better of the Capitals in Round 3, with the Capitals also going down early in the weekend to make it back-to-back losses. They bounced back with a big win in this clash at home, as they had contributors across the floor. Kia Nurse was the top points scorer with 21, as well as four assists and three steals, while it was hard to decide the best influence as Kelsey Griffin got back to some of her best basketball thanks to 19 points, eight rebounds, four assists and three steals. The damaging duo was not the only Capitals to impact in a multitude of ways, as Olivia Epoupa (12 points, eight rebounds, 10 assists and four steals) came agonisingly close to a triple double, and Keely Froling‘s work off the bench (19 points, seven rebounds, three assists and two blocks) was also noted. For the losing side it was hard to find winners on the court, as Alice Kunek (17 points, five rebounds and two assists) and Jessica Kuster (16 points, four rebounds, two assists and twos steals) were the two main contributors as a number of their usual reliable stars being down on numbers. Lauren Scherf still managed nine rebounds to go with her six points and four assists, but the Flames will be keen to bounce back from the night.

In a memorable night for the visitors and another forgettable one for the home side, Townsville Fire celebrated their first win of the season while piling on more pain to Perth Lynx. In what was their fourth consecutive loss after an initial Round 1 win, Perth looked good to bounce back in the first half, winning both the opening two quarters to lead by six at half-time. It proved to not be enough however, as Townsville raced home with a 20-15 final term to force overtime. It was there the momentum of the Fire kept building as they outscored the Lynx 13-8 in the period to record an all-important victory, 93-88. Abby Bishop was the star of the show with 31 points, 11 rebounds, four assists and two steals, while Micaela Cocks led from the front for her side, posting up 22 points, five rebounds, five assists and three steals. Tess Madgen was the other Fire player to reach double figures thanks to 14 points, nine rebounds and five assists. For the Lynx, Alison Schwagmeyer‘s strong start to the season continued with another 23 points, as well as three rebounds and three assists, while Ariel Atkins came off the bench in her first game of the season since landing in Australia from the US, putting up 19 points, seven rebounds, four assists and a steal. Katie-Rae Ebzery (14 points, nine assists, four rebounds and three steals) contributed across the court and was always prominent.

For the second time in as many weeks, Southside Flyers emerged victorious against Bendigo Spirit, defeating their lower ranked Victorian counterparts by 13 points in the Sunday evening game. Southside remained undefeated with the victory and headed into Monday’s night’s blockbuster with Melbourne Boomers with the same form line as their opponents. In the win against Bendigo, Southside flew out of the blocks to put up 24 points to 18 in the first term, then won the second to lead by seven at half-time. Bendigo forced its way back into the contest with a 21-16 third term to get within a basket, but Southside steadied to run away with it 30-19 in the last quarter and secure the 93-80 win. Mercedes Russell was superb once again, picking up a double double with a massive 15 rebounds to go with her 12 points, four assists, three blocks and two steals, while Rebecca Cole (23 points, four assists and two steals) and Sara Blicavs (21 points, three rebounds and three steals) were the strong scorers. Leilani Mitchell had six assists with her 16 points, while Jenna O’Hea (12 points, four rebounds and three assists) also reached double-figure points. For the Spirit, Tobin had 16 points, six rebounds and two steals, while Kelly Wilson was just as impressive with 15 points, four rebounds, seven assists and two steals. Wehrung (13 points) was the other Spirit player to reach double-figure points, but it was not enough across the board.

Stay tuned for the review of the blockbuster match between the undefeated Melbourne Boomers and Southside Flyers.