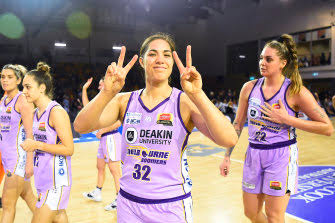 THE University of Canberra (UC) Capitals were able to stand up when it counted and secure second spot ahead of the Melbourne Boomers – the Capitals’ opponents in the upcoming 2019/20 Women’s National Basketball League (WNBL) finals series. The other spots were already locked in prior to the final round, with Southside Flyers earning the minor premiership and will face fourth placed Adelaide Lightning in the other semi-final. Perth Lynx, Sydney Uni Flames and Townsville Fire avoided the wooden spoon with Bendigo Spirit’s last round win over the Fire falling three points short of leaping off the bottom of the table.

A strong final quarter saw Sydney Uni Flames get the points in their final home game of the WNBL season, securing a 10-point victory over Bendigo Spirit. The Flames raced out of the blocks early to gain the advantage and lead by eight points at the first break. Desperate to get off the bottom of the ladder, Bendigo fought back to cut the deficit to just one point at the main break. They then took the ascendancy from that quarter into the third, taking the lead by two and looking good with 10 minutes to play. Sydney Uni finished the stronger of the sides, putting the foot down and pleasing the home crowd with a 20-8 final term to win, 78-68. Brittany Smart was strong with 22 points, three rebounds and four steals, well aided in the starting side by Jessica Kuster (16 points, nine rebounds, three assists, three blocks and two steals). Lauren Scherf was important off the boards with 12 points, eight rebounds as well as four assists, while Alex Wilson came agonisingly close to a double-double or even a triple-double with 10 points, nine rebounds, eight assists, two steals and two blocks. Shyla Heal stood up in defeat for the Spirit with 17 points and four rebounds, while Abigail Wehrung (15 points, five rebounds and three assists) and Tessa Lavey (14 points, five rebounds, six assists and four steals) were also prominent.

In an important game for confidence, fourth placed Adelaide Lightning survived a thriller against fifth placed Perth Lynx. The Lightning led early by three points at the first break, but the Lynx kept in the contest with a 21-20 second term to cut the deficit back to two, and by the final break scores were level. With nothing separating both sides keen for a win, the Lightning stepped up in the crucial final quarter to win, 75-74 and finish at home on a high prior to finals. Brianna Turner put up a ridiculous 24 rebounds to go with 16 points, three assists and two blocks, hauling her side across the line when it counted. Stephanie Talbot was unsurprisingly impressive again for the home team, posting numbers of 13 points, five rebounds and four assists, while Nicole Seekamp helped herself to 17 points, five rebounds, eight assists and three steals. Kathryn Westbeld showed off her talents in the starting side with six points, seven rebounds and three assists for the Lightning. Nadeen Payne picked up a double-double for the losers, recording 11 points and 10 rebounds as well as three steals. Maddison Allen had 15 rebounds to go with four points and three blocks. From a points perspective, Ariel Atkins and Katie-Rae Ebzery both recorded a team-high 16 points.

The UC Capitals gained a hard-fought but important win over the Lightning ahead of the WNBL finals series. While the pair have opposite semi-finals in a fortnight, the Capitals were able to hold firm against a side that started strongly, and hold them off by two points at the National Convention Centre. The Lightning led by two points at quarter time, but the Capitals regained control at a place that has become a fortress this season for them, taking the lead by a point at the main break. They extended that out to two by the last change but the Lightning refused to go away. Both sides threw everything they had in the final quarter, and in the end they could not be separated, which meant the home team got up by the three quarter time margin of two points, 73-71. Kia Nurse had another night out on the scoresheet with 28 points, nine rebounds, three assists and two steals, while Kelsey Griffin returned to the starting line-up and had 10 rebounds, two steals and three blocks to go with seven points. Maddison Rocci again picked up double-figure points with 16, as well as two rebounds and two steals. Marianna Tolo‘s good form also continued, having 13 points, six rebounds, three assists and four blocks. For the Lightning, Talbot picked up a double-double with 15 points, 12 rebounds and nine assists, and while Turner did not reach the feat, finished the weekend with an average of 18 rebounds following another huge game on the boards with 12, as well as eight points, two assists and two blocks. Lauren Nicholson had an impressive 16 points, three rebounds and four assists, while Westbeld picked up 10 points, two rebounds and three assists.

It might have mattered little in the scheme of the WNBL finals series, but the result of this game meant plenty to both sides. In a battle of the bottom two sides, Bendigo Spirit needed to win by 23 points in order to leap off the bottom of the ladder and overtake Townsville Fire. Both teams have had disappointing seasons this year, but Bendigo was yet to win on the road so Townsville started as strong favourites at its home court. It was the Braves that quietened the crowd early, leading by six points at quarter time and held a 12-point lead by the main break. Sensing a blowout, the crowd was nervous but the Fire responded to match it with the Spirit and only concede an extra point in the third term. Bendigo needed to win the last by 10 points in order to grab seventh spot on the table, and it did all it could in that quarter, piling on 24 points though it would not be enough, running out a comfortable 20-point winner but falling short of sentencing Townsville to the wooden spoon. Carley Ernst was simply sensational for the Spirit, scoring 26 points, 10 rebounds and seven assists in an almost triple-double effort. Lavey was her partner-in-crime with 21 points, seven assists and four rebounds, while Heal also reached double-figure points from the starting line-up with 14, as well as five rebounds and five assists.  Coming off the bench, Gabrielle Richards picked up 11 points and six rebounds in the win. For the Fire, Christina Boag had a memorable game to round out the season, picking up huge numbers of 22 points, 15 rebounds, three assists, two steals and two blocks. Darcee Garbin (14 points, six rebounds and three assists) and Micaela Cocks (11 points, five assists) also reached double-figures, while Tess Madgen had seven rebounds and four assists, but only five points.

The ladder-leading Southside Flyers got the job done on Saturday with a 17-point win over Sydney Uni Flames at Dandenong. While top spot was never in doubt for the league’s newest side, the Flyers finished off the season in style to prepare for the WNBL finals. Meanwhile the Flames were unable to cause an upset, though they did have a promising final term, scoring 21 points to 11 to stop what looked like a complete annihilation brewing. At the final break, Southside led by 27 points after winning each of the first three quarters by six, four and 17 respectively, completely dominating the third term. They were able to give valuable court time to some of their younger players, and gave Ringwood Hawks’ utility, Jacqueline Trotto a debut. Sara Blicavs was strong for the winners, picking up a team-high 18 points, eight rebounds and six assists to be the clear standout for the Flyers. Mercedes Russell had 17 points and three rebounds, while Anneli Maley played her best game of the season off the bench with 11 points and six rebounds, Rebecca Cole had 10 points, three rebounds and three assists to also reach double-figure points. For the Flames, Kuster was a lone hand up the scoring end with 21 points, six rebounds, two assists and three steals, the only visiting player to surpass 10 points. Scherf and Madeleine O’Hehir both had nine points on the night, but it was a lean performance from the team in the Flames’ last match of the season.

From an almost-blowout to an actual blowout, Melbourne Boomers took no chances, convincingly putting Perth Lynx to the sword in the second against fifth clash. They never looked like losing this match, piling on a whopping 32 points to 14 in the opening term, and by half-time the margin was out to 23 points. The home fans were up and about wile the visiting fans were hoping for the final buzzer, as Melbourne continued its strong control in the second half, winning that half by six points. Perth to its credit managed to stem the bleeding in the half, particularly in the last term, while Melbourne gave some of its bench players more time to spread the load and manage them ahead of the post-season series. Cayla George had a big day out with one assist away from a triple-double, posting up 24 points, 12 rebounds, nine assists, three steals and two blocks in the big win, while Ezi Magbegor also recorded a double-double thanks to 15 points, 12 rebounds and two assists. Madeleine Garrick (17 points, three assists) and Sophie Cunningham (10 points, two rebounds) performed well, while Kalani Purcell (17 points, six rebounds, three assists and two steals) was sensational off the bench in her best performance of the season. For Perth, the Lynx had just 26 rebounds on the night, with Atkins and Marena Whittle both picking up eight apiece, as well as combining for 41 points in an otherwise low-statistical night. Ebzery could also hold her head high after 15 points and two assists.