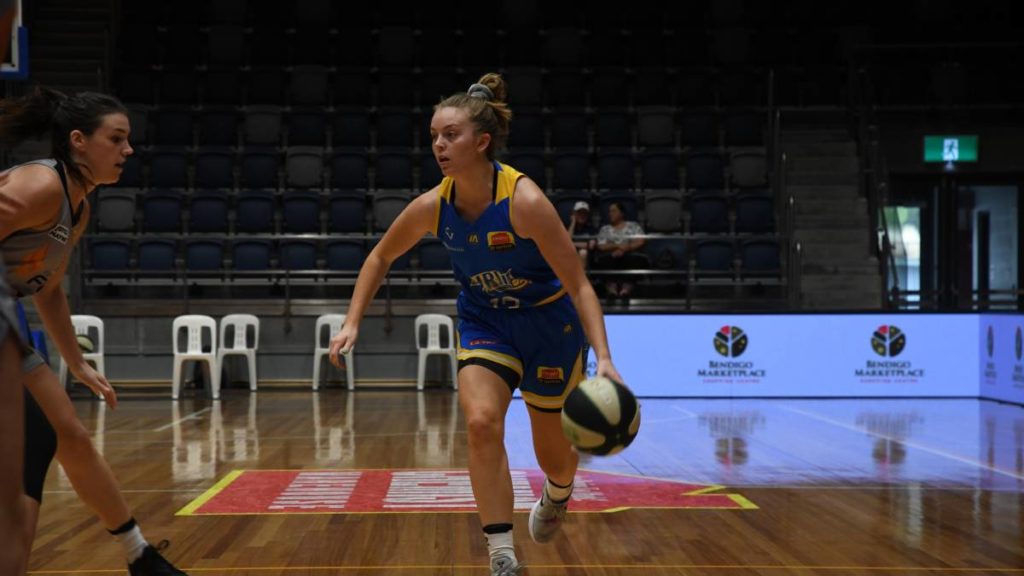 IT was a massive round of Women’s National Basketball League (WNBL) action, with Bendigo Spirit snapping a nine-game losing streak to draw level with Townsville Fire in the bottom two spots, while the top four seems almost done and dusted with a two and a half-game gap between fourth and fifth.

It took until overtime, but Adelaide Lightning managed to get the job done at home against the reigning premiers, University of Canberra (UC) Capitals by 10 points. The Lightning proved to be a crowd-pleaser in Adelaide, desperately needing a win to retain fourth spot with the likes of Sydney Uni Flames and Perth Lynx edging closer, while the Capitals had to claim victory in order to temporarily take second spot. It was the Capitals who started the stronger of the sides, piling on 21 points to 16 in the first term, then led by seven at half-time to look pretty solid at the main break. But the third term out of nowhere saw the Lightning take back the momentum and completely dominate the play, sinking 17 points to nine to remarkably lead at the final break, albeit by a solitary point. A high scoring final term resulted in the Capitals drawing level by the end of regular time, but the momentum was with the Lightning who shot 17 points to seven in the overtime to run out as comfortable winners as an overtime victory goes. Stephanie Talbot led the charge for the home side with a massive 21 points, 16 rebounds, four assists, two steals and two blocks, teaming well off the boards with partner-in-crime, Brianna Turner (11 points, 14 rebounds, two blocks and one steal). Lauren Nicholson (15 points, two rebounds and two steals) and Nicole Seekamp (seven points, seven rebounds and nine assists) provided good support, while Chelsea Brook showed how bright of a future she has with 14 points and four rebounds off the bench. The Capitals had a couple of standouts in the absence of Kelsey Griffin, with Marianna Tolo starring thanks to 22 points, 12 rebounds, two assists, two steals and two blocks, while Kia Nurse sank 16 points, and had five rebounds, five assists and three steals. Olivia Epoupa (seven points, 12 rebounds, four assists and four steals was prominent across the board, while Maddison Rocci (eight points, five rebounds) and Keely Froling (seven points, six rebounds and four blocks) provided plenty of rebounding power.

Melbourne took full advantage of a UC Capitals loss with both games on simultaneously, as the Boomers gained some vital breathing space in second spot as they grabbed their tenth win in their final game of 2019. Playing at home against bottom two side, Townsville Fire, the Boomers were strong favourites to take it out, and despite some resistance in the first term which saw both sides head into quarter time with 20 points apiece, Melbourne clicked after that. The Boomers scored 23 points to 16 in the second term to lead by seven at half-time, and had increased their lead to 11 by the final break. Not willing to take the foot off in the final term, Melbourne added 18 points to 13 in the last quarter to secure a fairly comfortable win, 77-61. Cayla George was the standout on court, sinking 27 points and helping herself to three rebounds and two steals. Lindsay Allen (10 points, three assists, two rebounds and two steals) was the other player to reach double figures from the starters, while Stella Beck (14 points, three rebounds and two assists) did it coming off the bench. The home side dominated rebounds, 38-29, with the likes of Ezi Magbegor (nine) and Kalani Purcell (nine) leading the way, with Purcell also picking up six assists and four steals to be the ultimate team player as she contributed just four points. For the Fire, Abby Bishop again led proceedings in the scoring department, adding 19 points, five rebounds, two assists and two steals, while Tess Madgen helped herself to 13 points, three rebounds and four assists. Julie Vanloo (10 points, two steals) also reached double figures, while Darcee Garbin might have had a night to forget in terms of shooting (one from seven from the field), but still recorded seven rebounds and three assists. Kate Gaze came off the bench for five points, three rebounds, three assists and two steals in a solid performance.

Last placed Bendigo Spirit snapped a nine-game losing streak by holding on in a one-point thriller over fellow bottom two side, Townsville Fire. While Bendigo’s hopes of making finals were all but over prior to the game, the Spirit effectively ended the Fire’s chances by toppling them in the contest. It also meant Bendigo moved to within points difference of the Fire in seventh place on the ladder. In the match, neither side could be split at quarter time, before Townsville hit the front by two points at the half. Bendigo regained control by the final break with a powerful 27-21 third quarter, which earned a response from the visiting side. In one of the nail-biters of the season, Townsville scored 15 points to 12 in the last quarter, but it would not be enough to get the points. Carley Ernst led the way for the Spirit, sinking 24 points and picking up six rebounds and two assists in the process, while Abigail Wehrung helped herself to 18 points, six rebounds, four assists and two steals. Demi Skinner (16 points, five rebounds) and Shyla Heal (12 points, five rebounds) also reached double figures in what was a terrific team effort. For the losing side, Bridget Carleton shone across the board to be arguably the best-on despite the loss, picking up 19 points, 12 rebounds, three assists and two blocks. Tess Madgen (17 points, five rebounds and two assists) and Darcee Garbin (13 points, four rebounds) also were prominent in the starting line-up, while Micaela Cocks (10 points, two rebounds) contributed coming off the bench.

The University of Canberra (UC) Capitals have drawn level with Melbourne Boomers in second spot after a dominant second term helped the reigning premiers overcome Perth Lynx on the road by 17 points. Neither side could be split in the opening term, but a 26-11 rout in the second stanza saw the Capitals race out to a 15-point half-time lead. Perth cut the deficit to 12 by the final break, before the Capitals put the foot back on the pedal with a 17-12 last term to run out 76-59 winners at Bendat Basketball Centre. Three Capitals picked up double doubles, with Tolo (21 points, 10 rebounds, three assists and four blocks), Froling (14 points, 11 rebounds) and Epoupa (10 points, 14 rebounds and seven assists) all reaching the milestone. Nurse was not too far behind to make a dominant starting four with 23 points, seven rebounds and five assists, while Rocci had six points, three rebounds and six assists in the win. For the Lynx, Katie-Rae Ebzery was a lone hand in attack with 25 points, four rebounds, two assists and two steals. The next highest scorers were Ariel Atkins (eight points, four rebounds and two steals) and Imani McGee-Stafford (eight points, six rebounds), while Marena Whittle amassed 13 rebounds to go with four points.

Adelaide has consolidated fourth spot with a crucial eight-point win over Sydney Uni Flames on the road. The Lightning moved two and a half games clear of the Flames in fifth, with Perth Lynx’s loss also helping give the Lightning a crucial break inside the finals spots. The Lightning got off to a good start to lead by two points at quarter time, but the Flames refused to throw in the towel, maintaining the narrow deficit by the main break. It was the third term where Adelaide kicked away with a 17-10 quarter to open up a nine-point advantage. Wary of a comeback in front of their home fans, the Lightning did not allow the Flames to gain too much momentum in the fourth term, with Sydney Uni only cutting the deficit by one at the final whistle to go down 72-80. Kathryn Westbeld continues to improve for the Lightning, starting and producing 17 points, four rebounds and three assists for the afternoon, while Talbot was best-on for the Lightning, sinking 13 points, and having nine rebounds and nine assists – just one rebound and one assist away from a triple-double. Nicholson (13 points, three rebounds and two assists) and Seekamp (13 points, six rebounds, five assists and two steals) also contributed plenty of points for the evening. For the losing side, Alice Kunek was a standout with 26 points, four rebounds and four assists, while Jessica Kuster (14 points, six rebounds, four assists, two steals and two blocks) and Alex Wilson (14 points, two rebounds, four assists and three steals) also reached double-figure points.