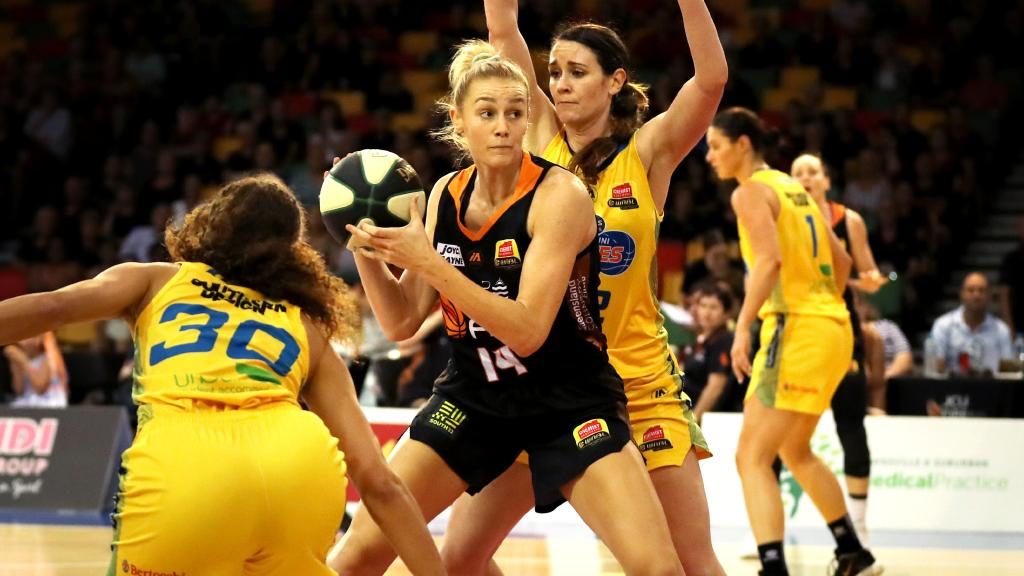 SYDNEY Uni Flames have kept their Women’s National Basketball League (WNBL) finals hopes alive after back-to-back wins in Round 10 saw them move to within a game of fourth spot on the table. It was a different story for both Townsville Fire and Bendigo Spirit as the sides combined for three losses to be a couple of games behind the top six.

In a special Thursday night encounter, Sydney Uni Flames got up by just seven points over cellar dwellers, Bendigo Spirit on the road. The Flames overcame a half-time deficit of seven points, to post a 44-30 second half. The visitors took control in the third term, outscoring the home team by five to cut the deficit to two at the last change, before running away with it in the final quarter thanks to an impressive 24-15 term in the 88-81 victory. Jessica Kuster (20 points, seven rebounds, two assists and two steals) and Alice Kunek (20 points, six rebounds, two assists and one steal) both dominated the points for Sydney Uni, while Colleen Planeta contributed 14 points, four rebounds, three assists and two blocks. Lauren Scherf was also prominent off the boards with 12 rebounds to accompany her nine points. For the Spirit, Carley Ernst was the clear standout thanks to an equal game-high 20 points, as well as seven rebounds, five assists and two steals in the loss. Kelly Wilson (19 points, five rebounds, two assists and two steals) was not far behind, while Abigail Wehrung (15 points, four rebounds and two assist) and Marte Grays (11 points, six rebounds and two assists) also reached double-figure points.

Bendigo suffered its second loss of the weekend, this time up in the nation’s capital when the Spirit went down to the reigning premiers. The University of Canberra (UC) Capitals saluted in a 76-66 win, taking an early two-point lead at quarter time, then extending it to eight by half-time. To Bendigo’s credit the Spirit won the third quarter with a 17-16 effort, before the Capitals regained the momentum in the last term to extend its eventual winning margin out to 10 – the highest of the round. In the absence of 2018/19 Most Valuable Player (MVP) Kelsey Griffin, Keely Froling took control for the Capitals, posting a massive 30 points, 10 rebounds, three assists and two steals to be the standout player on court. Kia Nurse (16 points, six rebounds and two steals) and Marianna Tolo (13 points, nine rebounds, three assists, two steals and four blocks) were also prominent, while Olivia Epoupa continued her strong performance across the board thanks to eight points, 12 rebounds, five assists and three steals. Demi Skinner top-scored for the Spirit with 15 points, as well as five rebounds, while Wehrung had 13 points and three rebounds. Ernst only scored the five points in the match, but recorded 11 rebounds.

Perth Lynx grabbed a crucial win in the scheme of the finals race, knocking over fellow bottom three side Townsville Fire on the road to move a game and a half clear of the Fire heading into Christmas. The home side was up and about early, taking a three-point lead into quarter time, before Perth hit its straps in the second term to cut the deficit back to one point. Townsville continued to lead throughout the game, extending the margin back out to three by the last change, before the Lynx saved their best to last with a powerful 23-15 final quarter to secure the all-important 82-77 victory. Ariel Atkins top-scored for the winners with 16 points, four rebounds, two assists and one steal, while Katie-Rae Ebzery (15 points, six rebounds, three steals and three assists) was productive across all areas. Nadeen Payne (11 points, six rebounds) was busy off the boards, while Marena Whittle (12 points, three rebounds) and Alison Schwagmeyer (11 points, three rebounds, four assists, two steals and two blocks) both provided relief off the bench. For Townsville, Abby Bishop was absolutely enormous in a bid to drag her side over the line. She contributed a game-high 18 points and 16 rebounds, while also picking up four assists, three steals and a block. Bridget Carleton (17 points, three rebounds), Darcee Garbin (14 points, nine rebounds and three assists), Tess Madgen (12 points, seven rebounds and five assists) and Julie Vanloo (11 points, seven rebounds) all shared the load, but the team recorded 17 turnovers to 10 to ultimately cost them the game despite dominating the rebounds, 42-30.

The biggest upset of the round came on Saturday night when the Sydney Uni Flames took down ladder leaders, Southside Flyers at Dandenong Stadium. The Flames secured back-to-back wins and moved to within a game of fourth spot with the seven-point triumph, winning two of the quarters but making it count with a fast start. Sydney Uni raced out of the blocks to pile on 24 points to 16 in the opening term, then survived a second term fightback by the Flyers to still lead by seven at the main break. That lead went back out to eight heading into the final quarter, and again the visitors weathered the storm in the last term to eventually take home the chocolates, 86-79. Kunek was best on court with a double-double effort thanks to 27 points, 11 rebounds and four assists, while Planeta stood tall with 20 points, five rebounds, two assists and two blocks. Alex Wilson came close to a double-double herself with 12 points, nine assists, three rebounds and three steals, while Kuster (11 points, six rebounds and three steals) and Tahlia Tupaea (11 points, six rebounds and four assists) also reached double-figure points. Sara Blicavs was the standout for the losing side, adding 23 points and nine rebounds in the absence of Mercedes Russell and Jenna O’Hea, while Leilani Mitchell (18 points, three rebounds and eight assists) and Rebecca Cole (13 points, five rebounds and four assists) were also busy across the night.

A fast start by Melbourne Boomers helped the home side secure an important nine-point win at the State Basketball Centre yesterday. The Boomers needed to secure the points against fourth placed Adelaide Lightning in order to gain some breathing space in the top three, and also leapfrog UC Capitals in the process. They did just that, piling on 20 points to 13 in the opening term, then extended the lead with a 15-12 second quarter to head into half-time with a 10-point advantage. Adelaide fought back to cut the deficit to seven once again at the final change, before Melbourne regained the upper-hand and scored 16-14 in the last quarter to win, 66-57. Lindsay Allen was strong with 22 points, six rebounds, teaming well with Ezi Magbegor who picked up a double-double after 16 points, 10 rebounds and three assists. The Boomers shared court time across the board with 10 players getting a run on the court, and had contributions from Sophie Cunningham (seven points, four rebounds and three assists) and Kalani Purcell (nine points, four rebounds and two blocks). Adelaide had a couple of standouts once again, with both Brianna Turner and Stephanie Talbot picking up double doubles. Turner recorded 19 points, 11 rebounds and two blocks in the loss, while Talbot had 15 points, 10 rebounds, three assists and two blocks. Outside of the duo however, the next highest point-scorer was Nicole Seekamp with seven, as well as five assists and two rebounds, but also picked up nine turnovers. The loss meant the Lightning still marginally hold onto fourth spot ahead of the Flames, but only by a game.