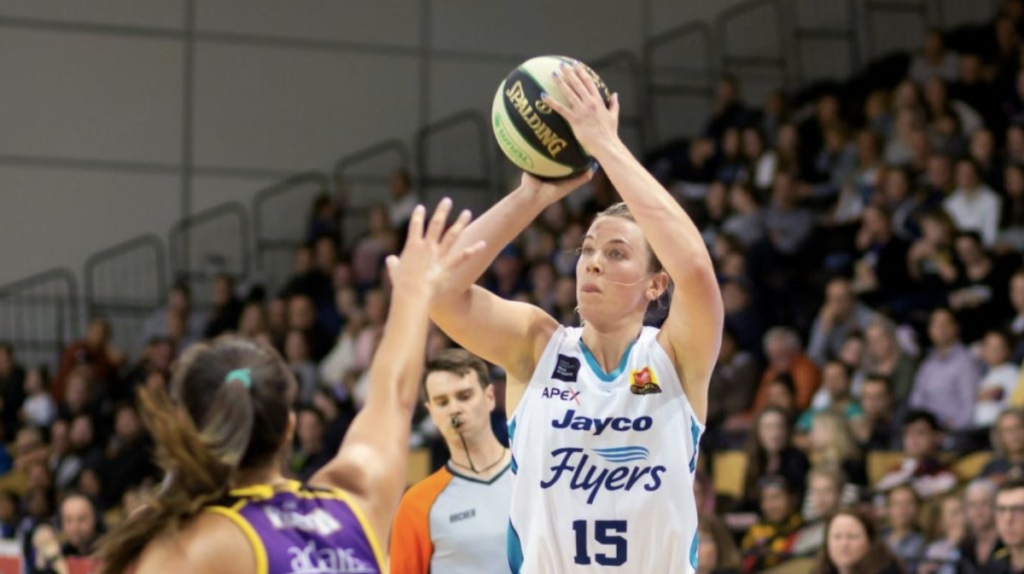 A VETERAN of the game and a faithful individual to the Southside Flyers organisation, Sara Blicavs is warming up for her sixth straight season with the Dandenong-based club (seventh overall) and the WNBL is keen to welcome back one of Victoria’s prized pupils.

Back in 2014, Blicavs received her only taste of WNBL title glory with the Bendigo Spirit. Last season’s 2019/20 year saw her almost repeat that feat, as the Flyers went down to the Canberra Capitals in straight sets during last year’s Grand Final Series. Now, we find ourselves three weeks out from the WNBL21 season and Southside’s power forward will be raring to go and help her side return to the finals once again.

A major proponent of her team’s rebounding alongside former import Mercedes Russell, Blicavs proved again why she is one of the competition’s best frontcourt prospects averaging 13.4 points, seven rebounds and an assist and a half per game. Blicavs converted her attempts at an average of  42.6 per cent from all over the court, including the 33 three-pointers that the 27-year-old made throughout the regular season at a 37.1 per cent success rate. Blicavs is no one-trick pony, and come November 12, many will see her full repertoire on display after re-signing with the Flyers.

“Signing with the Flyers again was a no-brainer,” Blicavs said. “The culture and the professionalism this team brings, mixed with the happiness, joy and fun I get from being involved with this wonderful club just made my decision so easy.”

”I’m super excited to get things going with Southside and hopefully this year you’ll see us go one better and win the championship. I was incredibly disappointed in the loss of the Grand Final, as we all were, which if anything, has only made us hungrier,” she noted.

Praising Blicavs for her energy off the court as well as on it, head coach Cheryl Chambers spoke to Draft Central about what the well-known forward has to offer.

“She brings lots of energy and helps when things are flat, and we need something dynamic and exciting. So, she’s really important to that part of our team and I think that’ll be important in this hub situation where we have lots of games in fewer days,” Chambers said.

Given the extended offseason for Blicavs, the power forward also explained how the extra rest time will further rejuvenate her and prepare her more for what is to be a gruelling WNBL21 fixture over the six-week period.

“Personally, I feel as this off-season has been an absolute blessing. My body and more importantly my knee feels stronger than it ever has. I feel incredibly ready to play and continue to get better and help the club in any way I can,” Blicavs said.

While rebounding was a major focus area for Chambers and her team last year, the addition of Liz Cambage to help on the boards next to Blicavs will hopefully remedy any struggles in that regard, to get them to that championship they missed out on last season and are eager to get their hands on.