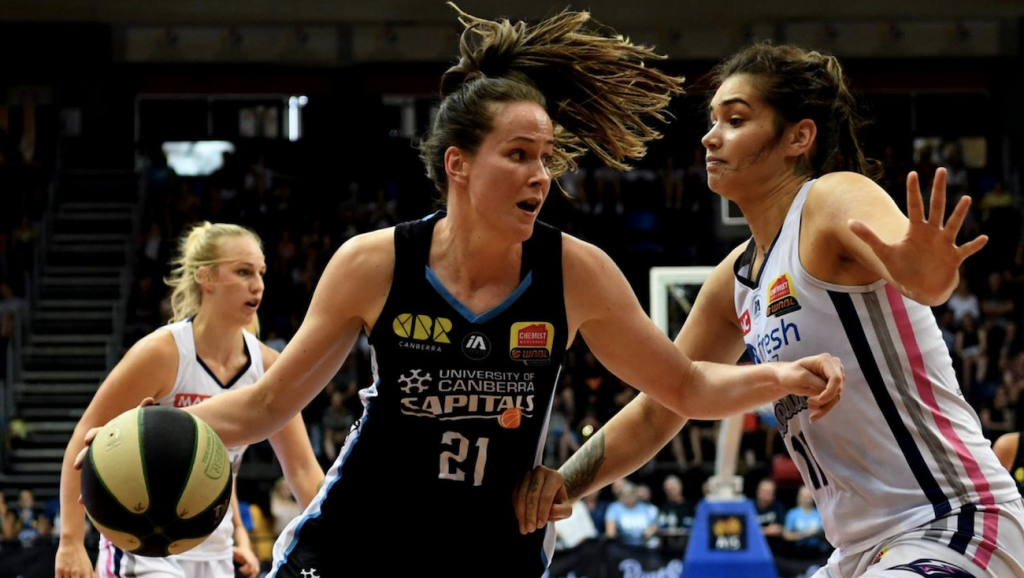 FOR whoever Paul Goriss decides to replace Kia Nurse’s role in the starting five rotation, it will be a monumental ask to say the least. As it stands, Keely Froling’s increased presence in the frontcourt seems to be a likely option for the 24-year-old, after re-signing for one more season with the two-time championship side.

The chance to go for the team’s third title in as many seasons was one of the primary factors for Froling, while completing the later stages of her physiotherapy degree in the nation’s capital was another. Nevertheless, Froling proved in WNBL20 that she is ready for a bigger role in the team, following the untimely absence of captain Kelsey Griffin due to injury.

After seeing a dramatic increase in court time against the Bendigo Spirit in mid-December, a 30-point, 10-rebound and three assist showing instilled confidence in Goriss, reassuring the head coach he had made the right decision during the homestretch of last season with his captain absent.

“Keely has a similar DNA to Kelsey in that she’s a warrior and she’s prepared to play whatever role she needs to play,” Goriss said to Draft Central. “The game that stood out to me is when she got the broken nose and came back on to the court to make the game-winning shot. That shows the toughness of her and the all-around character Keely has. No matter what, she wants to win, she wants to compete, she wants to get better and she will do anything to do that,” Goriss explained. Froling would summarise an excellent season overall, displaying 12.2 points, 6.9 rebounds and close to one and a half assists per contest over 18 regular season games.

While Froling makes the most of her offseason back at home in Townsville, Goriss is working away to enhance the full effect of his frontcourt as he feels that signings like Froling and new-comer Mikaela Ruef will drastically improve the side’s depth down low and around the ring.

“Keely can swing between the three and the four which is good if we want to play tall or small ball,” Goriss said. “We could have done something similar last year if Ruef was available, but it has served us well in the prior two seasons for our sides. I do think we have one of the better frontcourts in the league with our depth and our size and I also love our flexibility, where each player provides something a little bit different as well,” Goriss added.

The environment of the Canberra Capitals is frequently referenced by all its players, whether past or present, that the club breeds a competitive nature in its squad. This rings true for Froling personally, as she believes that returning to the squad is what is best in her Olympic preparations for 3×3 basketball. “Playing and training every day in an environment that is really high performance that we are lucky enough to have at the Caps, is going to help immensely. Just being able to get back on the court and play at a high level is what is going to help the most,”  Froling said in an announcement by the club.