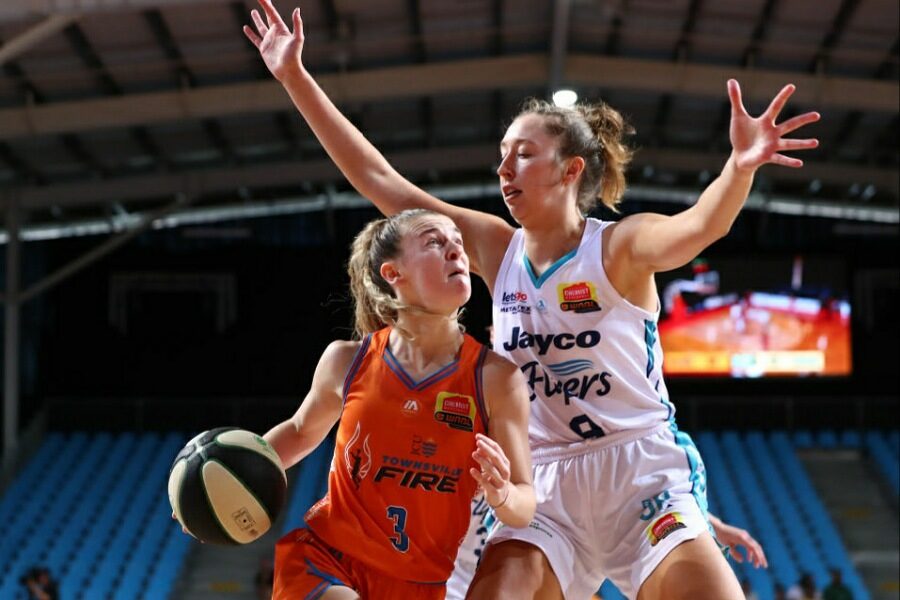 IT all comes down to this day with Southside Flyers and Townsville Fire set to lock horns in a do or die grand final battle. Southside will be out for vengeance after falling in last year’s WNBL grand final while Townsville Fire have proven they have nothing to lose and everything to gain after an impressive rise through the ranks this season.

The last time these two sides met was only days ago with Southside getting the last laugh in the first semi-final and claiming an important victory, fuelling them with momentum heading into this clash. Despite having a shorter turn around then their competitors, the Fire have an insatiable thirst for a win and will be keen to provide their fans with plenty of entertainment and make full use of their homecourt advantage. It has been a roller coaster season for both sides but by late this afternoon there will be a new crowned champion with either the Flyers or Fire set to walk away with some nice silverware. A victory here would see Southside claim their first premiership since being rebranded while for Townsville it will mark their fourth premiership in history.

The WNBL minor premiers have a real pep in their step having won every outing against Townsville in the past two seasons but will have their work cut out for them against the Fire who are reinvigorated and have a real sense of momentum after stringing together a couple of strong quarters. It is fair to say that belief is strong in the Townsville unit overcoming an experienced Melbourne Boomers outfit only days ago to make their way to the grand final and give themselves a chance to hold the premiership cup aloft.

Statistically speaking, the Flyers have an insane ability to hit the basket with great accuracy and penetration to constantly keep the scoreboard ticking over, meaning that the Fire will have to be on their a-game in order to limit the opportunities in which Southside have to attack the rim. The Flyers also have the upper hand when it comes to fast break points and ability to convert points from turnovers given the high calibre of players that are able to seize the moment and take charge. Defensively the Flyers also reign supreme amassing 33 more blocks than the Fire while also highlighting their cleanliness and ability to attack the ball with 140 steals compared to 109. Southside have the ability to play with a shared mentality highlighted through their higher assists count 369 to 249.  On the flip side the Fire have proven to be tried and tested performers on the rebounding front able to reel in missed shots time and time again.

When looking at top players in either squad it is hard to go past All-WNBL First team star Liz Cambage who has made a lasting impression and will be eager to once again inflict some pain both on the scoreboard and rebound front in the grand final. The center has an impressive set of averages with 24.1 points, 8.9 rebounds and 1.7 blocks a game. She is not alone though with Sara Blicavs a real livewire out on court with her 13.9 points, 7.2 rebounds and 2.2 assists while Rebecca Cole has elevated her workload throughout the season to collect 15 points, 2.2 rebounds and 4.4 assists each time she steps out on court. The Flyers also have plenty of depth with Leilani Mitchell able to change the course of a game alongside Monique Conti, Aimie Clydesdale and Jenna O’Hea.

The Fire have two key prongs in their unit with Lauren Nicholson and Shyla Heal the go-to-girls able to light up the court and cause a wave with their impact. Nicholson is a seasoned campaigner that knows how to stand up when it counts and averages an impressive 18.8 points, 3.9 rebounds, 2.6 assists and 1.4 steals a game. Partner in crime, Heal is coming off a stellar performance and will be hoping to replicate similar feats today with the youngster not afraid to take the game on credit to her averages of 17.1 points, 4.7 rebounds, 3.5 assists and 1.4 steals. Off the bench Townsville have some good support with Zitina Aokuso a handy inclusion with her 9.7 points, 5.7 rebounds and 1.1 assists while Nadeen Payne also brings another element to the contest.

It will be a thrilling contest between the two sides as they battle it out for the most prestigious award and honour in the WNBL. Expect the game to go down to the wire and for each player to throw everything they have at it in order to get their side over the line.