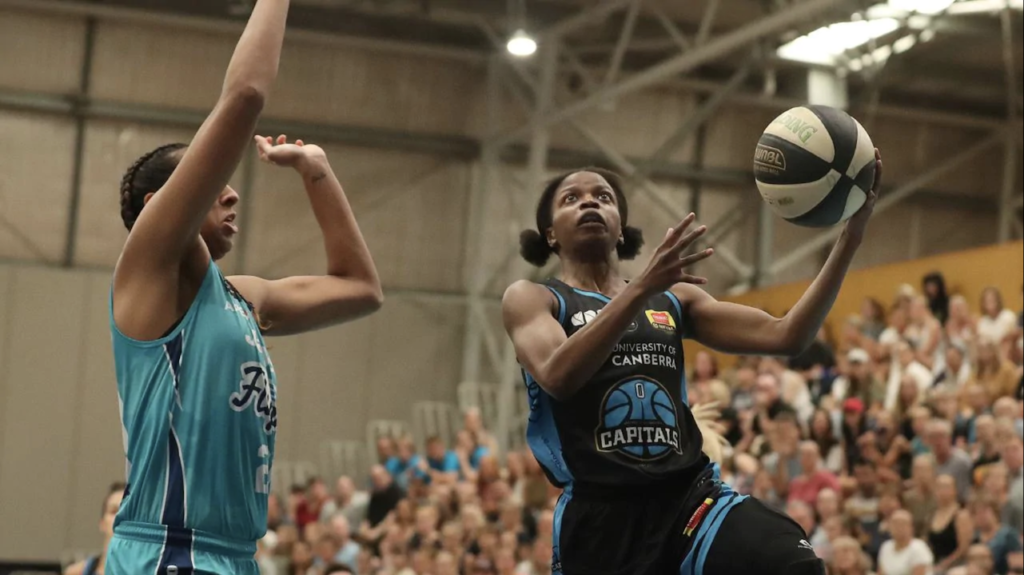 IN the first game of the Women’s National Basketball League (WNBL) grand finals series the Capitals clenched victory over a gallant Flyers side by a mere two points.

The league’s top two teams finally met in a clash that embodied everything the WNBL, as both the Southside Flyers and the UC Capitals went to war at Dandenong Stadium. Both sides came out of the block shooting at an efficient rate, but the real talking point came when Jenna O’hea, who had been out the last six weeks due to injury, made her impact known instantly. Coming off the bench after three minutes, O’hea scored seven straight points getting into a groove very early on. Leading by a bucket after the first quarter, the Capitals struggled to fend off a gritty Flyers side that had barely let anything slip through the cracks throughout this season’s campaign. With the Flyers getting to the basket fast and often, and making free-throws when they could, a four-point lead was what Southside had to deal with, against a Capitals side that has been unstoppable for almost a month now. Rebecca Cole led all scorers with 18 first-half points, setting the tone for the home side.

With both sides going back and forth at one another, a deep two from Leilani Mitchell on the buzzer separated the sides by six points with the final quarter yet to play. But the Capitals would stubbornly not fall away, matching the flyers basket for basket until the final buzzer. Then, with less than a minute and a half to play, a spinning layup with contact by Olivia Epoupa put the Caps up by two. The final possession led to a turnover by the Flyers and fell into the hands of an elated MVP in Kia Nurse, as the Capitals stole Game 1 in Dandenong, taking home the win 82-80.

It was the perfect ending for Nurse, as she led her side on the court and on the scoreboard, finishing her night with 19 points and five rebounds. While no single player achieved twenty points on the day, it was an overall effort, as four players reached 14 points or more. Kelsey Griffin was next on the podium next to Nurse, with 18 points and 12 rebounds to her name. While, Marianna Tolo and Epoupa each finished 15 and 14 points respectively, as Epoupa also snagged nine rebounds and six assists. For a disappointed flyers side, Cole rounded up her night with a solid 23 point and seven assist night, meanwhile Mitchell was good for 15 points, five rebounds and five assists. O’hea provided 14 points and six rebounds off the bench in 33 and a half minutes in her return to action.

The Flyers now travel up to Canberra to try and win an almost impossible game, as through 14 match-ups this season at the AIS Arena, the Capitals have only lost once (13-1). But, with the only team having beaten this team at home being the Southside Flyers at the start of this season, perhaps WNBL fans can expect some déjà vu. If not, then the Capitals will win back-to-back titles, possibly their ninth in franchise history.