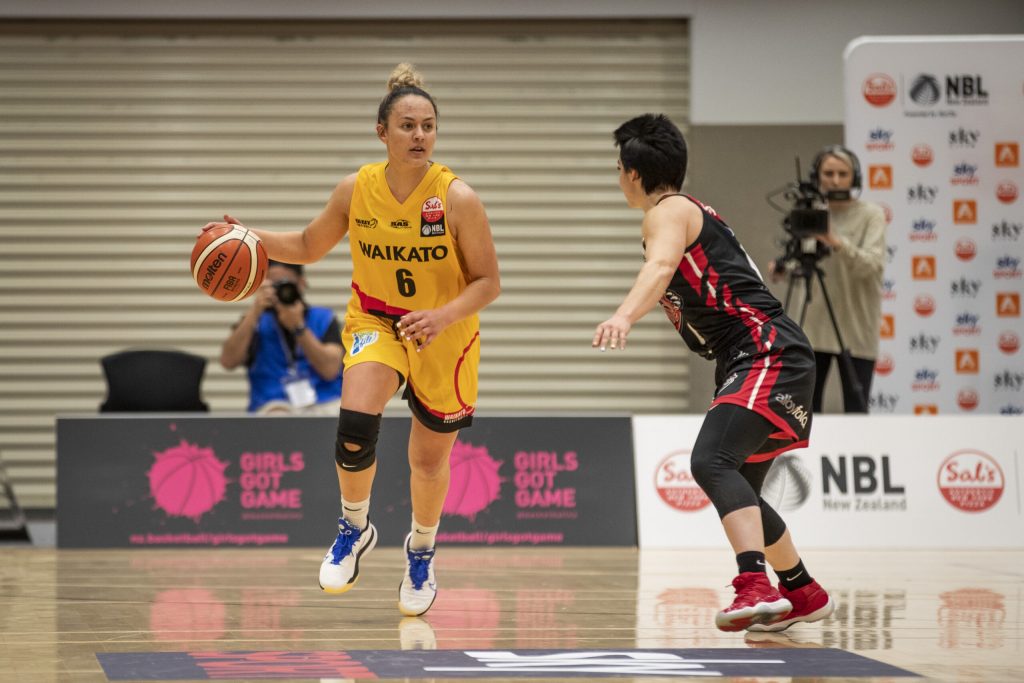 WAIKATO Wizards have gone back-to-back in a remarkable come-from-behind overtime win against Canterbury Wildcats in the New Zealand National Basketball League (NZNBL) 18IN18 competition last night. The Wizards trailed by 12 points at the final break, before scoring 35-17 in the final term and overtime period to run out six-point victors in an impressive victory.

Matangiroa Flavell was first on the board for the Wizards in the opening 30 seconds of the game, but a triple from Wildcats’ Brittany Richards not long after showed both teams were up for the fight. Makayla Daysh added four points to her name, with Jayzelee Wawihi also scoring to hand the Wizards a five-point advantage midway through the term.

Lauryn Hippolite dragged her Wildcats team back into the contest with some nice shooting including a floating jump shot and a long-range bomb to tie the scores, then Gemma Etheredge handed Canterbury the lead. Kayla Manuirirangi grabbed the advantage back for the Wizards with two-and-a-half minutes left on the clock, and Kelcy Ballantine pushed it out to as much as a four-point advantage. A late triple from Rosalia Samia slashed the Wildcats deficit to a solitary point at the break, as the Wizards headed in 14-13 in front.

The lead did not last long though with Richards first on the board for the Wildcats in the second term. A sloppy first half of the quarter saw both teams have turnovers or missed shots, with the second basket of the quarter – and the Wizards first of the term – come more than four minutes in, through an Esra McGoldrick layup. The teams traded blow-for-blow with Etheredge and Daysh both applying scoreboard pressure.

When Hippolite started to get cooking, she stretched the lead out to seven points, then Richards made it nine with two minutes left in the term. A late McGoldrick layup for the Wizards saved them from having the equal lowest score in a match this season, but there was still much work to be done, trailing by seven points at the main break.

Instead of a Wizards response in the third quarter, it was a Wildcats one, with Etheredge nailing a three-pointer 11 seconds in, then Richards blew the margin out to 12 with just over two minutes expired. Alana Paewai hit a two-point jump shot for the Wizards’ first of the quarter three minutes in, then they got within eight points at the midway point of the term.

But a triple from Hippolite and a layup from Etherdge in the space of 30 seconds off a Wizards turnover, and the Wildcats were 14 minutes away from victory with a 13-point lead. Remarkably the lead actually got out to 15 when Richards answered a Manuirirangi layup in the final two minutes, but five of the last seven points at least cut it back to 12 for the Wizards by the final break.

Waikato would need to really conjure something special, and somehow they did just that, with Manuirirangi scoring the first four points of the term. Though Shea Crotty responded with a triple for her first points of the match, only for a classy Waihi step back jumper to answer that. It seemed to do the trick as Manuirirangi and Waihi clawed the deficit back to three midway through the term and it was game on thanks to a 12-3 run to start the quarter.

The Wildcats managed to steady a little through Samia and Hippolite, as the momentum was shifting. Crotty secured an important layup for the Wildcats, but then the unthinkable happened. Daysh nailed a jump shot, hit the And-One chance, and when Manuirirangi was sent to the line, she made no mistake with her free throws. Two minutes on the clock and the scores were tied.

Etheredge made a jump shot and then Daysh followed suit with two points of her one and 63 seconds left on the clock. Etheredge only managed to hit one of her two chances from the charity stripe moments later, but then McGoldrick found the same troubles with just 50 per cent of her two chances going in. When Terai-Ma-Teata Elia‘s jump shot missed with six seconds on the clock, the scores were tied and the teams were headed to the season’s first overtime.

With all the momentum, the Wizards continued that form and while the teams traded blows in the opening couple of minutes. It was not until the last 66 seconds that the Wizards took control. After one of two free throws from McGoldrick from the line, the Wildcats missed two three-point attempts, and then racing it down the other end, the Wizards found Waihi free for the three-point dagger of her own and it was a two possession game. A deliberate foul in the final 23 seconds sent Paewai to the line and she put the icing on the most delicious cake for the Wizards.

Manuirirangi hit a team-high 15 points, as well as four rebounds, two assists and five steals. Daysh scored 13 points and 12 rebounds in a double-double effort, while Waihi had 14 points, two rebounds and two steals off the bench, only eclipsed by the hard working effort of McGoldrick (11 points, seven rebounds and three steals).

For the Wildcats, they had a triple threat in Etheredge, Richards and Hippolite. Etheredge was the standout with 17 points, six rebounds three assists and three steals, while Richards (13 points, five rebounds) and Hippolite (14 points, two rebounds and two steals) were both strong. Elia was the best off the boards picking up 13 rebounds – six offensive – to accompany her five points and seven steals.

The result means the Wizards move to a 201 record and now have a rest until next Monday when they take on Harbour Breeze. The Wildcats will be searching for their first win in the season when they lock horns with the Breeze tomorrow night.