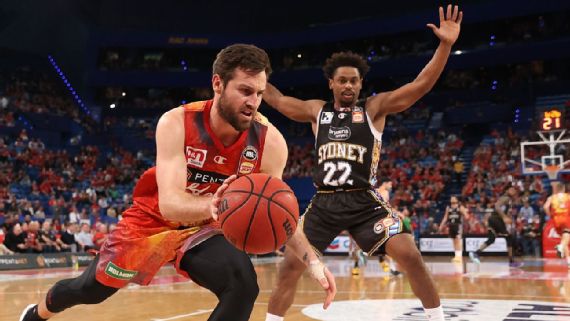 THE Perth Wildcats have recorded their second consecutive win without NBL superstar Bryce Cotton, taking down the Sydney Kings by 14 points at RAC Arena on Thursday night. The former NBL MVP is set for a stint on the sidelines with a quad injury, but that has not slowed down the form of his side. The Wildcats have backed up their win over the Adelaide 36ers earlier this week by taking down a Kings side that was hopeful of taking advantage of an undermanned opponent. Instead, the 10,650 strong Perth crowd was treated to a crucial win from the home side, a result that truly keeps them in contention for dethroning Melbourne United on top of the ladder.

The opening term saw Wildcat John Mooney open his account with eight first-quarter points, while teammate Todd Blanchfield was also impressive to begin the game. Despite strong performances from the pair, the Wildcats trailed by one point at the first break, with a determined Kings side up for the fight, thanks to a number of contributors. Despite entering the match without their star, the Wildcats still entered the match favourites, so when the Kings’ lead extended into the second quarter, fans in RAC Arena felt they were on the brink of witnessing a disappointing upset. The Wildcats were determined not to let this happen, and were able to completely break the game open to finish the quarter. A Mooney 3-pointer put his side up by two points, and this kickstarted a remarkable 14-0 run from the Wildcats to close out the second term. Blanchfield score eight straight points as the Kings struggled to contain the Perth forward from finding any shot he desired. The Wildcats entered the locker rooms at halftime with a 15-point lead, and prepared for any charge the Kings would make in the second half.

The third quarter saw the Kings make a slight charge as expected, but missing crucial shots saw the visitors not able to take advantage of this and reduce the lead. Instead, it was eight consecutive points from Wildcats development player Luke Travers that had the strongest impact for the quarter. Despite keeping their opponents quiet for periods of the third term, the Kings still trailed by 14 points heading into the final term. The fourth quarter certainly the prettiest display of basketball we’ve seen this season, with the Wildcats opening the scoring through Blanchfield, but unable to score a basket for the next seven minutes. The Kings were only able to score seven points themselves during this time, and their inability to capitalise ultimately ruled out any chance of a comeback as they would fall 81-67.

For the Wildcats, Blanchfield (23 points) and Mooney (19) ran the show all night long, constantly finding ways to score when their team needed it. Blanchfield’s eight-point run in the second term truly broke the game open when the contest was up for grabs. Travers also impressed for the Wildcats with 16 points of his own. For the Kings, Jarell Martin was an offensive threat all night, despite the scoreboard deficit. The forward finished with 20 points, while fellow King Jordan Hunter recorded a double-double with 14 points and 10 rebounds.

The Wildcats will head to Illawarra on Tuesday night to take on the Hawks, while the Kings face the toughest task in the NBL as they face off against the ladder-leading Melbourne United in Sydney on Saturday.