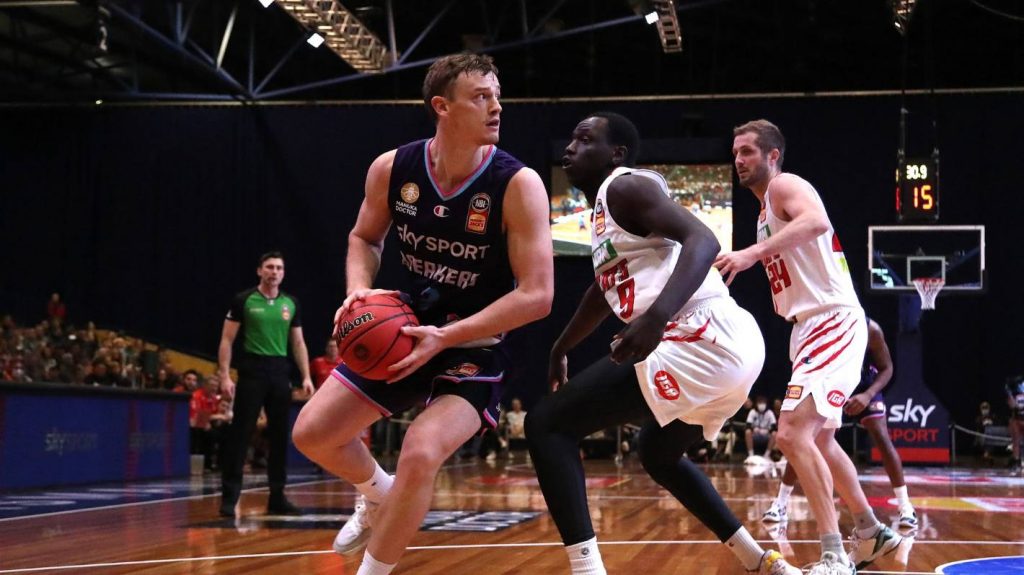 PERTH Wildcats prevailed in an overtime thriller, just edging out New Zealand Breakers (85-79) thanks to some Bryce Cotton magic to hit a three and send the game into extra time. It was a monumental occasion for the National Basketball League (NBL) with the game being held in Launceston, the first time an NBL match has been played in Tasmania in over a decade and the contest well and truly lived up to the hype.

New Zealand Breakers are renowned for their fast starts and this game was no different as they left the Wildcats in the lurch thanks to a scintillating 23 to nine point first quarter of play. They piled on the points early skipping out to a 12-4 point start and maintained that level of intensity throughout the first quarter inspired by Robert Loe who got busy with a handy six points. The overall team defence from the Breakers was impressive as they limited the influence of Cotton and John Mooney.

After impressing in the first term, Perth flipped the script to answer the call in the second and prove their dominance on the competition. Re-igniting their offensive prowess and hitting the scoreboard with more ease thanks to the likes of Mitch Norton and Jesse Wagstaff the Wildcats were able to steadily edge their way back into the contest. Increased defensive pressure came to the fore in the second quarter as Perth locked down the likes of Loe to reduce the ease in which New Zealand could score. Heading into half time only one point separated the two sides credit to the rise in intensity from the Perth side as they slotted 19 points to four to round out the quarter.

The tables well and truly started to turn in the third as Perth stole the lead for the first time of the game and put the Breakers on the backfoot. Cotton started to find his mojo after a difficult start plagued by inaccuracy as they held onto a three-point lead. With it all to play for in the final quarter Perth got out to a seven point lead but New Zealand were not about to back down and let the game slip through their fingers. Some huge plays from Tom Abercrombie and new recruit Levi Randolph dictated the term keeping New Zealand’s chances alive. The lead chopped and changed several times with neither side able to gain any real ascendancy with the game coming to a crescendo with a second left on the clock in normal time. Abercrombie made his presence felt in his 350th game while Corey Webster got involved in the action to cut the deficit to a mere point with a tick over 30 seconds to play.

The intensity continued to rise as the Breakers could sense a chance to topple their higher ranked opponents as William McDowell-White delivered a much needed layup and then converted the two free-throws to once again swing the lead back into the Breakers’ favour albeit by three points. But cometh the moment, cometh the man with Cotton draining a huge three to send the game into overtime, after struggling with inaccuracy all game.

Racing out to a handy lead in the first few minutes of overtime it looked as if the Breakers had secured a huge upset win. But the class of the Wildcats shone through as they strung together a 13 point to two point run to steal a nine point win, in an absolute heart stopper.

Finn Delany controlled proceedings for New Zealand just falling short of a double-double with nine rebounds and a team-high 25 points. Webster managed 11 points, three rebounds and eight assists in the loss while Abercrombie slotted 10 points of his own. Colton Iverson registered eight points, nine rebounds and two assists for the Breakers as Loe was handy with his 10 points and five rebounds.

Cotton led the charge for the Wildcats and despite his inaccuracy still managed to top the table with 34 points and dish off three dimes. Todd Blanchfield had an influence on the outcome thanks to his 16 points, six rebounds and three steals as teammate Norton produced 11 points and nine rebounds eight of which were defensive. Mooney was well and truly down on his usual productivity only managing three points but still reeling in nine rebounds and four steals. Wagstaff was the other key contributor thanks to his 10 points and five rebounds.