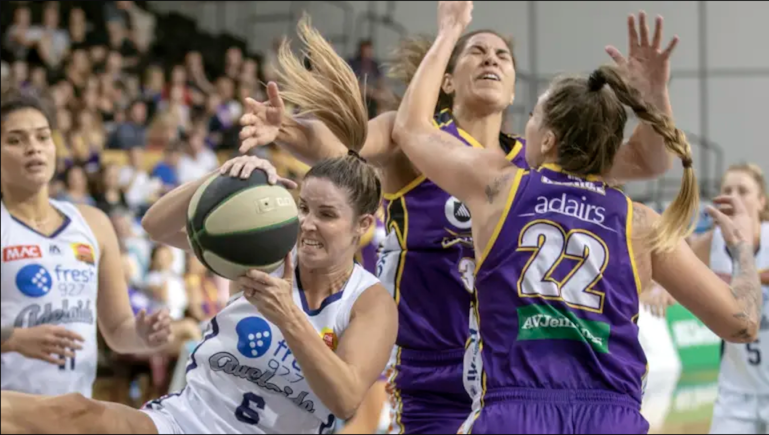 FINALS fever hit the Women’s National Basketball League (WNBL) on the weekend, and saw mixed results in terms of favourites. In the first semi-final played, the UC Capitals showed why they were the minor premiers with a huge 19-point victory over fourth placed Perth Lynx. They head to Perth with the Lynx now desperate to stay in the premiership race, needing a win for victory. In the other game, Adelaide Lightning shocked the Melbourne Boomers in a vital away fixture, meaning the third placed Lightning could take out the semi-final if they win in front of home fans on Thursday.

The UC Capitals uphold a brilliant season with a comfortable win at home against the Perth Lynx. Though outdone in the first term, Perth impressed in the second period, scoring 27 points to 10 to pick up a half-time lead. However, the lead was short-lived as UC stormed in the third to score 34 points to 13, and 23 to 20 in the fourth. The game was done and won for the home team with players, Kia Nurse, Leilani Mitchell and Kelsey Griffin, paving the way. Nurse dropped a game-high 31 points, hitting six from range and five from five at the foul line. Mitchell followed close with 24 points, six rebounds and seven assists – also hitting six from range. While Griffin was the only player to earn a double-double, scoring 18 points with 12 rebounds and seven assists. For Perth, Brittany McPhee was the biggest standout. She picked up 25 points with eight rebounds, shooting at 80 per cent on the inside and 50 per cent on the outside. Allison Schwagmeyer also performed across 22 minutes with 13 points and seven rebounds.

Adelaide picked up an important win in their best of three against Melbourne at the State Basketball Centre. The win puts Adelaide in good stead come their next game, where they face Melbourne at home for a chance in the finals. While Melbourne started more promising, Adelaide managed to tie up the game heading into the second half where momentum took over and the game remained firm in their grasp. Nicole Seekamp and Nia Coffey both had great games for Adelaide. Seekamp scored a game-high 18 points with three rebounds, six assists and four steals, while Coffey followed with 16 points, eight rebounds, two steals and a block. For Melbourne, Lindsay Allen scored 12 points with four rebounds and five assists, and while playing only 13 minutes, Eziyoda Magbegor scored 14 points with two blocks, shooting at 100 per cent from the field.