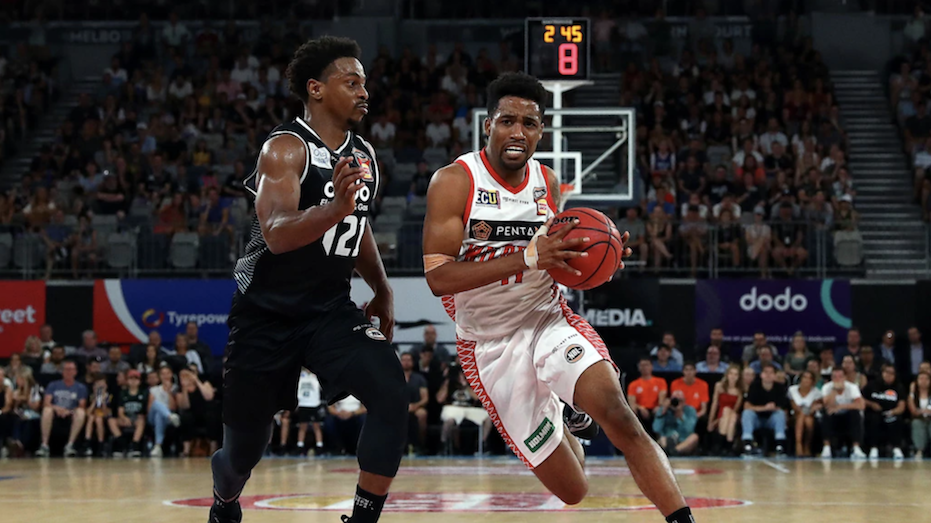 AFTER 18 rounds and two convincing semi-final wins, we are down to our final two teams of the 2018/19 National Basketball League (NBL) season. The reigning champions from last year, Melbourne United, face off against the most decorated team in NBL history, Perth Wildcats. An even matchup between each other in their four games throughout the season, each are deadly at home and have the forces on the court to punish away also. There is every reason that this Grand Final series could stretch five games, and it will be a most memorable moment for all. Perth have the upper hand from finishing the season atop the ladder with the Grand Final series beginning in the west.

Two of the unlucky players to miss out on the NBL MVP gong, Cotton and Ware have been standout guards this season. Both of these guys are game changers, whenever that is during a game. Ware started the game strong in Game 2 against the Kings last week, draining 17 points including four triples – all within the first 10 minutes. And we have seen so many times this season, Ware has had the game-winning shot and converted, although sometimes it has gone the other way too. Across the semi-finals, Ware averaged 26 points, 4.5 rebounds and 4 assists and in a massive boost, his field goal percentage was above 50 per cent for the first time since January 23 against Illawarra. His semi-final work does translate from his season stats, and it is pleasing to see his rebounding on the up. Against Perth this season, Ware had three games of 15 points or more and it was his best rebounding outputs too, with 18 over four games. Poor shooting brought him undone a bit, especially in Round 23 (nine points at 18.8 per cent), so it’s up to Cotton to bring that pressure yet again. Cotton averaged 20.5 points per game against the Bullets last weekend, with 4.0 rebounds and 8.0 assists, definitely contributing greatly to the Wildcats tilt at a title. Like Ware, it’s easy to see that Cotton hasn’t been fazed by the lights of finals. Cotton played two finals last season for 26.5 points, 2.0 rebounds and 2.5 assists so he’s already well on his way to being better this season. The year before, in five games, he averaged 25.2 points, 4.4 rebounds and 3.2 assists. Ware, in seven matches last finals, averaged 19.3 points, 2.4 rebounds and 2.9 assists.

An all-round player, Kay, especially against United, was two rebounds short in Round 18 from getting four double-doubles over the four games against Melbourne this season. Instead, he averaged 17.25 points and 11.25 rebounds which is still a mammoth effort for the Wildcats forward. Kennedy has been a underrated player on Melbourne’s roster, but has had the start on many occasions. He was able to get a double-double in the final game of the season though, ending his home and away season with 21 points and 15 rebounds. Other than that, although averaging 13 points across the year, he’s capable of hitting big and even so, provides support to Boone (second in rebounds at United – 7.3 to Boone’s 8.4). Kay leads his team in that department by a full 3 rebounds as he averages 8.7 this year. Last weekend, Kay averaged 17 points and 12.5 rebounds, while for Kennedy, he averaged 15.0 points and 7 rebounds against the Kings. This is Kennedy’s first NBL finals series in his first year in the league, but Kay has played six finals in 2016, only averaging 7.7 points and 3.2 each of rebounds and assists.

White is really coming good in the last two months and against Brisbane, he averaged 21.5 points, and in Game 2, hit five of nine from outside. His season average of 15.8 points is good for White, with a season-high of 27 points early on in the season, against Melbourne. A hustle rebounder too (3.9), he recorded 14 in three games against United this year. Goulding has been a standout against Perth in their matchups this year too, averaging 18 points in four games. Often coming off the bench too, Goulding leaves nothing on the court, also against Perth, averages 5 rebounds and 3.25 assists. Goulding has played finals six seasons now, and last year’s series saw him average 17.4 points, 3.3 rebounds and 2.6 assists. The years before that he was averaged over 20 points and around 4 rebounds too. This is White’s first finals series in his first NBL season.

How they got here:

Perth and Melbourne enter the NBL Grand Final with an 18-10 record and a clean sweep in their semi-final matchups against Brisbane and Sydney respectively. It is the first time that this has happened in NBL history, so a credit to just how damaging they each were this year. Perth started the season strongly, only dropping one of their first 11 matches but then suffered eight losses in their next 10 games to seeing them drop to third on the ladder. From their final game in Round 14 to their first game of Round 18, the Wildcats won six-straight before a final loss against United just before the finals started. United took some time to get going this season, getting to the halfway point at nine wins and five losses, never really getting a proper winning streak going, then or throughout the remainder of the season. United were tested a lot by teams finishing below the top four, including in nine overtime periods this season, three of which were against the Wildcats though, so these two sides definitely are matched up well.

Perth and Melbourne first met this season in Round 3 in Sydney in a double overtime thriller that will be remembered for a long time. Two of the best guards, Casper Ware and Bryce Cotton for Melbourne and Perth respectively took shots within the last 22 seconds but both fell short of the bottom of the basket. Perth took a 6-0 run in three minutes within the second overtime period which United couldn’t get a shot away. For Perth, Bryce Cotton was a star with 31 points, four rebounds and two steals. For Melbourne, Chris Goulding contributed 29 points (87.5 per cent from two point range), five rebounds, four assists and two steals off the bench. Their next meeting took place in Round 9, this time in Melbourne and it was home side with a commanding 17-point victory – 82-65 – mostly thanks to a 23-6 third quarter. For the victors, Goulding was again the star as he hit 19 points, along with seven rebounds and three assists. The Wildcats, although scoring low, it was Nicholas Kay who steadied the team with 15 points (at 70 per cent) and 12 rebounds with two steals and a block. In Round 14, Perth prevailed again at home, the game finishing a five-point margin again after Perth got off to a hot start, leading 27-14 at the first break. United had a sniff midway through the third term, but it was Cotton with 27 points, two rebounds and six assists, with two steals who allowed the Wildcats to hold on. For United, Mitch McCarron lit up RAC Arena as he scored 21 points along with nine rebounds and five assists. The final game of the season also saw Perth and Melbourne finish a great season. And wasn’t it a great game? An even score at the end of regulation, the overtime result ending in United’s favour 13-2. Goulding scored eight overtime points, but it was DJ Kennedy who stole the show, netting 21 points and pulling down 15 rebounds with six assists. Kay was again good for the Wildcats, finishing a valuable season with 22 points, eight rebounds and three steals.

The two best teams of this NBL season, and if the season form is anything to go by, this one could very well go down to Game 5. Formidable forces at home, evidenced by their two from two home records against each other this year. It could point to Perth as an eventual winner of the competition, as Game 5 will take place in the west of the country. Perth have only lost twice at home this year, losing to semi-finalists Sydney by one point in Round 9 and a two-point loss to Cairns in Round 13. Looking at those losses, a combined three points isn’t much and could very easily have been avoided for the Wildcats, so naturally, Perth don’t let teams get away too easily at home. Melbourne on the other hand had four home losses, but made up for those with eight away wins, not fazed by travelling. Statistics show that home teams have won 29 of the past 32, but there’s every possibility for an upset this season. There is not much difference in terms of statistics between the two teams, however Melbourne had an impressive run of consecutive 100+ point games, which is evidenced by their 92.4 points per game this season, compared to Perth’s 89.1 points. Both of these teams have valuable contributors to get them good looks around the offensive end, but equally as important are the rebounds, which Perth lead slightly. Melbourne’s defensive game is one of the best of the league, with the ability for players such as DJ Kennedy and Alex Pledger taking the edge off of Josh Boone, but as a team, United average 4.5 blocks a game (second in the league), whereas Perth are at the bottom, only averaging 1.6 blocks, although the pace of Bryce Cotton and awareness of Damien Martin lets Perth lead the league for steals (6.7 per game) and can easily punish quickly on a fast break. Perth scored just 67.5 points at Melbourne Arena this season, well below the 87.6 points they averaged on the road everywhere else. Melbourne is also the city in which Perth shot the ball the worst (34.7 per cent, 42.9 per cent elsewhere). The crowds in both cities are in for a treat across the next fortnight, and the support will be loud and the players will really thrive on the level of excitement as this 2018/19 NBL Grand Final series gets underway.