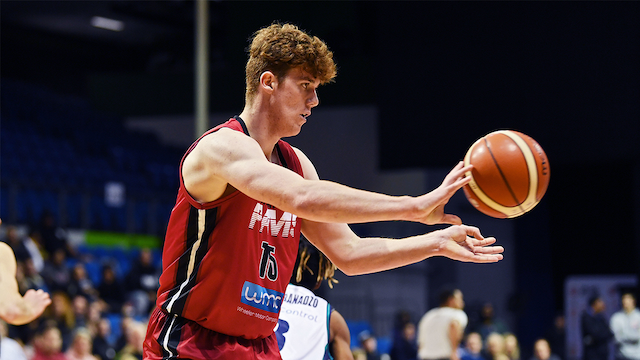 AN inspired third term by the 2020 Sal’s National Basketball League (NBL) Showdown last placed side, Canterbury Rams has continued the unthinkable dream with a come-from-behind 98-84 triumph over Auckland Huskies last night. Led by Thomas Webley who set the tone in the third term after his side had a slow start, the big man turned it on with unbelievable athleticism to drag his team back from the brink and over the line despite a remarkable 39-point effort from Izayah Mauriohooho-Le’Afa.

The first term belonged to the two talented Tall Blacks guards with Mauriohooho-Le’Afa and Reuben Te Rangi going head-to-head on the respective scoring fronts. The Auckland Huskies guard set up Tohi Smith-Milner with the opening basket of the game with a pass through traffic, and soon the size of Aaron Bailey-Nowell on offence added a couple more. Te Rangi would sink the first three-pointer of the game after being left wide open courtesy of a screen, but Bailey-Nowell immediately responded with a couple more points. Huskies had a number of chances but were missing them early, though that began to change when Mauriohooho-Le’Afa got cooking.

Te Rangi was still causing all sorts of issues for the Rams defence, piling on seven points, all of the Rams score in the first half of the term to get his side within four, and then assisted Quintin Bailey for a two-point deficit. But as would be the case, all the Rams scoring would come as a struggle, whilst the Huskies began draining treys like there was no tomorrow – which technically was correct for the losing side. Whilst Mauriohooho-Le’Afa was getting going, it was Leon Henry with a couple of triples and then a massive three first-quarter blocks that was intimidating the young Rams defence. At quarter time, the Huskies led by three after Taylor Britt’s first basket of the game with 40 seconds left got his side back into it.

Webley was having a promising game, and started well with three points and four rebounds, something he would build on in the second term. Despite the lead, Huskies coach Kevin Braswell was not happy with the defence on Te Rangi imploring his guards to double-team the Tall Black. They managed that better in the second term as he would not add to his seven first quarter scores, also gaining a bit of a breather as Sam Smith came on and piled on the baskets to be the most influential Ram with Webley in the second term.

But it was truly the Mauriohooho-Le’Afa show in the second quarter as he drained triple after triple to race to 20 half-time points courtesy of a 13-point second term. Between his offence and Henry’s defence, the inexperienced Rams were struggling to score. At one point, the Huskies guard was outscoring the Rams as Canterbury was two from 10 from three-point range, whilst the Huskies were draining a third of their chances.

The match was summed up by a fourth Henry block with four and a half in the term, followed by a Mauriohooho-Le’Afa trey putting the Huskies out to 12-point lead. With just 29 points to the midpoint of the term, the usually calm Mick Downer told his chargers that it was “the most selfish individual display I’ve seen from us this whole campaign and this is why we have 29 points.” The Rams managed to respond from that to cut back to six points as Smith drained a couple of layups. With 46 seconds remaining, Henry bowled over Ben Carlile-Smith and won the free throws, showing confidence with a stare down over his opponent on the ground. The half-time buzzer sounded with the Huskies up by six, 42-36.

It is unsure what went on at half-time, but whatever it was, it turned the Rams offence on. Whilst the Huskies defence was worried about Te Rangi and Britt, it was Webley who came to play, draining the first six points of the term and went on to finish the term with double-figure points as the big man was dropping floaters and slamming athletic dunks. He not only dragged his team back into it, but he lead the Rams to up to a lead themselves with a 16-4 run early in the term.

Mauriohooho-Le’Afa continued his form though with four points, but he was up against a team offence that had finally clicked. If it was not Webley, then it was Bailey or Toby Gillooly who were making the Huskies hurt. The biggest issue was the Huskies’ big men were getting into four trouble with Henry (three) and both Smith-Milner and Bailey-Nowell (four each) all close to being fouled out. Henry was still being aggressive on the offensive effort to try and help Mauriohooho Le’afa out, but everything the Rams touched turned to gold. Britt dropped a couple of treys off rare Henry fumbles out of bounds and the lead went out to 11 at one point.

Everything was going wrong for the Huskies as they were desperately trying to get some baskets, but a rushed pass from Smith-Milner was intercepted by Britt who went to the basket and was fouled to put the lead out to 13 by the final term. No one could quite understand what had occurred in the third quarter following a massive 39-20 term. What was even more remarkable was the fact that Te Rangi had not scored since the first term, and Britt only had 12 points – most of which came late in the term. For the Huskies, Mauriohooho-Lea’Afa and Henry combined for 46 points and 14 rebounds but needed more support.

The Huskies had 10 minutes to try and stay in the Sal’s NBL Finals Series, but it was not going to happen with a triple from Jack Exeter to push the lead out to 14 in the first 90 seconds. Henry responded with a last second trey before the shot clock expired. The Rams were still being aggressive on offence and throwing everything at the Rams in the last term. Henry was being incredible both inside and outside, and when Mauriohooho-Lea’Afa dropped another basket, his side was back within nine.

Six minutes in the Rams called a timeout with the 11-point lead and Downer implored his players to keep up the aggression on offence without going too far. The Huskies kept trying for long-range attempts, but the treys were now not dropping. Instead, Te Rangi was fouled shooting for a triple of his own and had three free throws, making two of them for a 12-point lead with five minutes remaining. The work by Canterbury’s defence to double-team Henry on the way to the hoop forced a miss, and Te Rangi almost ended the game with a triple but it rolled in and out.

With 3:47 remaining, Bailey-Nowell was fouled out for an offensive foul and a 11-point deficit. Henry continued his unbelievable work on defence and it led to a Huskies basket up the other end with Anamata Hatu scoring his first points coming on for Bailey-Nowell. Reuben Fitzgerald was using his speed to get to the basket but split both free throw opportunities in the final term with eight points the difference. When Smith-Milner was offensively fouled by Te Rangi with 2.31 on the clock, the Huskies had possession again and Mauriohooho-Lea’Afa was fouled on the way to the hoop and made no mistake with his free throws to go up to a massive 39 points and getting his team within six points.

Unfortunately for the Huskies that was as close as it got with Te Rangi draining an important basket, Britt doubling up with two nice jumpers and with just over a minute remaining the Rams held a 12-point lead. The Rams managed to wind down the clock and when Smith sank a trey with 30 seconds remaining, he iced the game to guarantee the Rams a most magnificent victory, 98-84.

Webley finished with 21 points, seven rebounds and two assists, shooting at 69 per cent from the field, while Britt (16 points, seven rebounds and 10 assists) ended up having a prominent night after a slow start. Te Rangi quietened down after his ripping first term but finished with 13 points, and still contributed with eight rebounds and six assists, while Gillooly picked up the only double-double of the game with 12 points and 12 rebounds to his name. Smith (16 points, two rebounds and two assists) and Bailey (14 points, five rebounds) were the other double-figure Rams. For the Huskies it was a two-man show with Mauriohooho-Le’Afa dominating everywhere with 39 points, six rebounds, five assists and two steals, while Henry threw himself desperately at every ball to end with 18 points, eight rebounds, four assists and six blocks. Smith-Milner was the other Huskies player to pick up double-digit points with 16 but outside of the trio, the remainder of the team contributed just 11 points.

Whilst the Huskies exit the competition after some terrific basketball this season, the Rams advance to take on the top of the table Otago Nuggets tomorrow night, having to recover for the second straight night. While it is unheard of to think the last placed side could take out the title, the Rams so far have shown anything is possible.