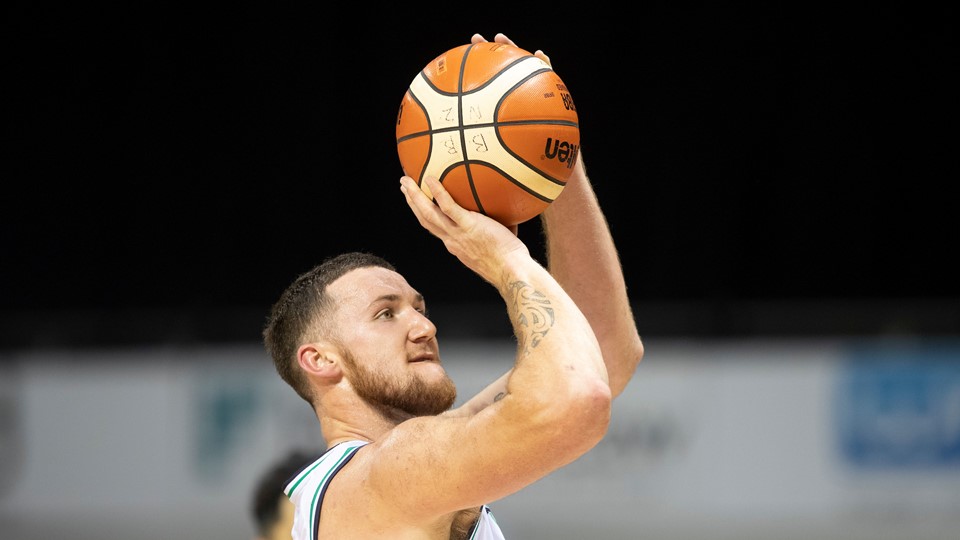 TOM Vodanovich has broken his own season-high record of 38 points after dropping a mammoth 43 last night – including 10 triples – on his way to leading Manawatu Jets to a vital 15-point victory over Franklin Bulls. The win goes a long way to ensuring the Jets lock up a top two spot and qualifying final, and Vodanovich was unstoppable on the night.

It was fitting that Vodanovich dropped the first points of the night, albeit a couple of free throws as Taane Samuel got warmed up from the field with five early points to counter Dom Kelman-Poto‘s opening triple within 30 seconds of the tip-off. Hyrum Harris was starting to get involved, and when Vodanovich sank his first basket from the field – a hookshot – the Jets led by six points. Kelman-Poto was having some sort of night early however, scoring nine points in the first half of the quarter, but the Jets team was able to match him as Harris and Jayden Bezzant were assisting Vodanovich on the scoring front.

Just as the Bulls got closer, the Jets would pull away leading by as much as eight points prior to a Jackson Stubbins‘ triple with four minutes left on the clock. The Jets again extended their lead via free throws as Vodanovich and Nelson Kirksey forced the opposition to foul them, and Samuel’s finish to the term helped the Jets hold an 11-point lead at the first break.

Immediately out of the break, Dru-Leo Leusogi-Ape heated up with a mammoth first couple of minutes, sinking nine points in that time, as he cut the deficit to seven after Vodanovich’s first triple of the night. It would be an omen for what was about to happened as he drilled four consecutive triples for his side, and then Nicholas Fee caught whatever fever the power forward had by nailing a triple of his own and the margin was back to 14 points.

Leusogi-Ape returned to the court and immediately had an impact with a driving layup, and just as it looked like the Bulls would draw closer – getting within 10 – Fee and Vodanovich sank seven more points and the latter had five treys for the match. Isaac Davidson managed to nail a jump shot in the last 20 seconds, but his side still faced a 15-point deficit.

Franklin needed a lift and it came in the form of Stubbins from long-range, and then the teams traded treys as Bezzant, Everard Bartlett and Samuel all struck gold from long range. Vodanovich continued to rack up the points as Kelman-Poto and Davidson tried to cut into the deficit, but when Vodanovich brought up his sixth triple with four minutes remaining in the term, the Jets were out to a 21-point buffer. Yet again his hot hand followed with another two triples as the Bulls led by as much as 25 points at one stage before a late Sam Timmins layup put the final break deficit back to 23.

Any chance of an unlikely comeback by the Bulls was snuffed out early in the final term as the Jets answered each challenge. Samuel put down the opening basket after a miss from Davidson, and while Bartlett’s stuck from long-range, his effort was matched by Vodanovich with a remarkable ninth triple. No matter what the Bulls threw at the Jets, they could not get within 21 points as Bartlett nailed another triple, then Vodanovich brought up number 10 from long range with four and a half minutes on the clock. He was subbed out shortly after having a well-earned rest as his teammates finished the game off.

The Bulls went on a late 10-2 run in the final couple of minutes, but it was only to cut the final deficit as the game was largely over through that third term when Vodanovich went haywire. In 34 minutes on court, the big man sank 43 points including 10 of a possible 16 triples, and 61 per cent from the field, while picking up 11 rebounds – 10 off the defensive boards – and three assists. His team shot 38 per cent from three-point range compared to the Bulls’ 25 per cent, and they averaged a greater efficiency overall from the field with 45 to 42 per cent. Their capitalisation at the charity stripe was also important (76 per cent to 36 per cent).

Aside from Vodanovich, Samuel picked up 16 points, four rebounds, two assists and one block, while Harris narrowly missed out on a double double of nine points, 12 rebounds and five assists. Fee (12 points, five rebounds and two assists) and Bezzant (10 points, two rebounds, three assists and two steals) also reached double figures. For the Bulls, Kelman-Poto was productive with 21 points at 56.3 per cent from the field, as well as 11 rebounds and two assists. Davidson (16 points, two rebounds) was solid, though inaccurate, while Bartlett (11 points) and Leusogi-Ape (11 points, four rebounds, three assists and two steals) stepped up in different moments.

The Bulls take to the court tomorrow night against Taranaki Mountainairs in their penultimate game, with the Bulls to follow later in the night against Otago Nuggets.