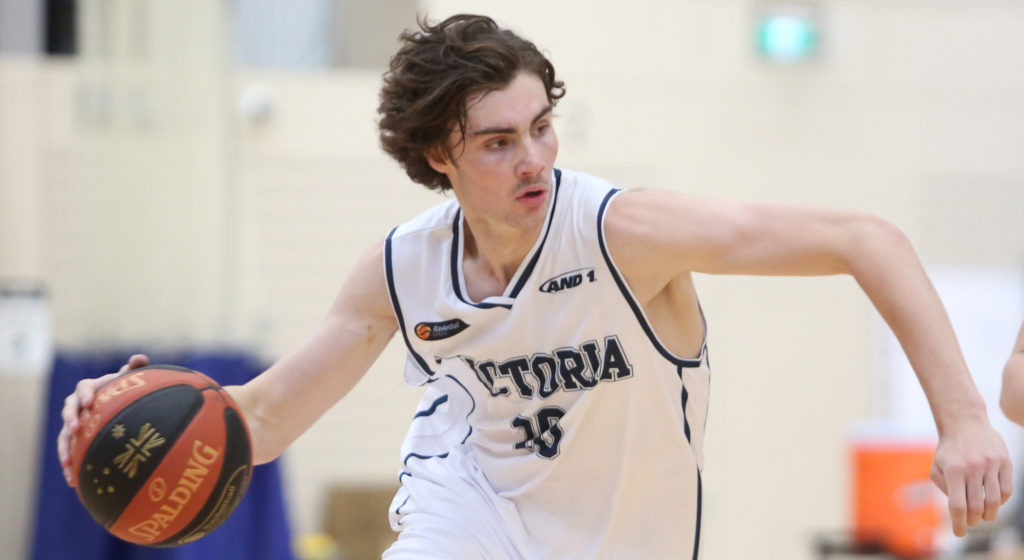 IT was a successful weekend for Victoria as three of their four teams came out of the ACT victorious in this year’s Australian Junior Championships for Basketball. The three-teams being Victoria’s under 20 men and women, who both knocked over Queensland’s sides, while Victoria’s Ivor Burge Women’s team toppled NSW in convincing fashion. Lastly it was South Australia that took home the Ivor Burge Men’s title in an overtime classic.

The Australian Junior Championships finally came to a head on Sunday as Queensland and Victoria squared off in what was a hectic gold medal game. Following a dominant 35-point first quarter, it already looked like the boys in navy-blue were ready to run away with the contest, leading Queensland by a sizeable 12 points. A gradual increase in scoring efficiency from the Reds saw them grind away at what was an 18-point deficit, outscoring team Vic 23-15 in the second, and then 26-20 in the third, resulting in a two-point lead at the final break for Queensland. In what was a back-and-forth final period, that saw the lead change hands nine times, it was not until the final 10 seconds that the game was decided. Former Melbourne Tigers guard in Joshua Giddey, took his chances from the three-point arch over a contesting Didan Tito, in which the ball bounced off the back of the rim straight into the lap of Giddey again, from which his second attempt from the elbow would strike true, putting the Vics up by two and win the coveted national title. Giddey played on another level throughout the entire game, as he amassed a sizeable 27 point, 10 rebound and eight assist stat line on the day. Credit still falls on the efforts of Southern Sabres big-man Kobe Williamson, who notched up a double-double, putting up 24 points and 11 rebounds, as well as a pair of blocks. For Zac Triplett, it was another shooting exhibition, as the Keilor Thunder guard rounded up 19 points, along with five three-pointers under his belt. For Queensland, the scoring load again fell onto the shoulders of Blake Jones, who piled it on with 24 points, 12 rebounds and five assists, whereas Boston Mazlin supported as best as he could with 20 points and five assists. Donovan Crowe produced 16 of his own points in addition. The win for Victoria was their third consecutive year raising the trophy, their 30th in history.

Meanwhile, in the Bronze medal game, the contest once again came down to the wire, as Taran Armstrong’s two made free-throws put Tasmania up by one point with two seconds remaining, which was followed up by a last second Biwali Bayles three-point heave that was off target for NSW, earning Tasmania a third-place finish at the tournament. Top scorers for Tassie were Armstrong who finished with 28 points and seven assists, whereas Reyne Smith compiled 22 points along with four threes from deep. As for NSW, Bayles led the charge the Blues as the Sydney Comets prospect put up a respectable 28 points, six rebounds and nine assists.

Like their male counterparts, Victoria’s U20 Women’s side pushed out ahead early against Queensland, whilst also limiting the Reds’ ability to score, leading 20-10 after 10 minutes of play. The Big V continuously and patiently extended the deficit over the next two quarters, out ahead 56-33 after three quarters of basketball. A late charge by Queensland would ensue, with the women from up north outscoring Victoria 23-13 in the final session, falling 13 points short of the now four-time defending champs, 69-56. The major factor for Victoria was the all-around performance of UCLA-commit Gemma Potter, who produced at an exemplary level, finding her stroke with 20 points, eight rebounds and five assists. By her side was Stanford-commit Agnes Emma-Nnopu, who secured a double-double on the day, like she had been doing frequently throughout the tournament putting up 10 points and 11 rebounds. Despite managing just 56 points through four quarters, Queensland’s scoring was more widespread across the team, as four of their starting five collected double digits, notably led by Neferatali Notoa who put up 16 points in her side’s loss. Furthermore, Georgia Woolley was very effective on the boards, as she attained 11 points and seven rebounds, while Catherine Macgregor produced 14 points.

Victorian head coach, Hannah Lowe, was extremely grateful to be the one at the helm of such a talented group post-game, “It’s a fantastic group – I feel really privileged to coach a group of girls who are that talented,” Lowe said. “We had a really short preparation, which makes it hard for us to put together an extensive playbook, but I think with that limited preparation, the girls did really well – they executed on the day, under pressure and all-in-all it was an excellent week.”

Following the events of the gold medal game, attention turned to Victoria A’s demolition job of NSW. Outscoring the Blues 27-eight in the first period, Victoria owned the game from there on in. With a 46-point second half, Victoria A would easily come out on top, taking out the contest 58-85. Despite Victoria A scoring 85 total points, only two players in Keeley Evans and Casey Paea reached 15 points, while Kayla Salmons was a monster on the glass finishing with a massive 16 rebounds. For NSW, Isabella Morgan’s 12 and Rebekah Dallinger’s 10 points headlined their team’s statistics.

South Australia took home this year’s Ivor Burge Championship over a courageous Victoria side in an entertaining finish to an action-packed tournament. With both sides winning two quarters each, regulation would not be enough time to separate these two sides. South Australia went on to score 20 overtime points, and held Victoria’s offence to a mere 12 points, leading them to a historic eight-point victory.  Perhaps Victoria’s biggest downfall were the number of turnovers they allowed being 31, compared to South Australia’s 19. In addition, SA moved the ball spectacularly, accumulating a mammoth 32 assists. Wayne Kinross led the way for SA, with 27 points and four assists, meanwhile Keenan Georg-Dent racked up 22 points and 17 rebounds. Averaging over 38 points per game throughout the competition, it was inevitable Jake De La Motte would put on another scoring display, this time with a ridiculous 47 points next to his name as he was later named tournament MVP and received the Ivor Burge Medal. Whereas Frazer Dawber mustered 11 rebounds in his performance. For head coach Ryan Holloway, it was a journey for his side, one that led to a style of basketball that he was proud of. “They gave it their all throughout the week,” Holloway said. “From game one our goal was to play the most respectful basketball that we could, play fairly throughout the tournament and I think these guys did that excellently.”

Victoria’s Ivor Burge Women’s team rounded out a stellar weekend for Victoria as a state, toppling a gallant NSW side on Sunday morning. The game started with both sides shooting at an efficient rate and staying neck-and-neck through the first quarter, with Victoria holding the slight one-point edge at the first break. Victoria’s defence put its best foot forward in the second and third quarters, as they limited NSW’s scoring almost completely, only allowing 11 points from the Blues over the two-quarter span. NSW scored 20 points in the fourth quarter; however, it would be too little, too late as they went down 76-53, with Victoria dominating the end result. With three women collecting double-doubles, Victoria was dominant at both ends of the floor. Kaitlyn Zonneveld (13 points and 11 rebounds), Jessica McCulloch (13 points and 10 rebounds) and Kaitlyn Papworth (10 points and 14 rebounds) all put on impressive displays, while Montana Haag-Witherden contributed 15 points. For NSW, 22 points and five rebounds was the end product for Brittany Anderson, as Eliza Mills was good for 13 points, five assists and five rebounds..

Head coach Simon Robinson was excited to see the group rise to the occasion and bring the gold medal back to Victoria. “We’re very happy to obvious avenge last year where we felt that we didn’t play as well as we possibly could,” Robinson said. “New South Wales is a very strong team and they always test us – they tested us on Friday morning in the rounds and that was quite a close one, so it was good to control things early, get to an early lead and then consolidate and build on it. “It’s delightful to coach this group; last year they were very disappointed obviously, so to win this one it’s quite a good feeling.”