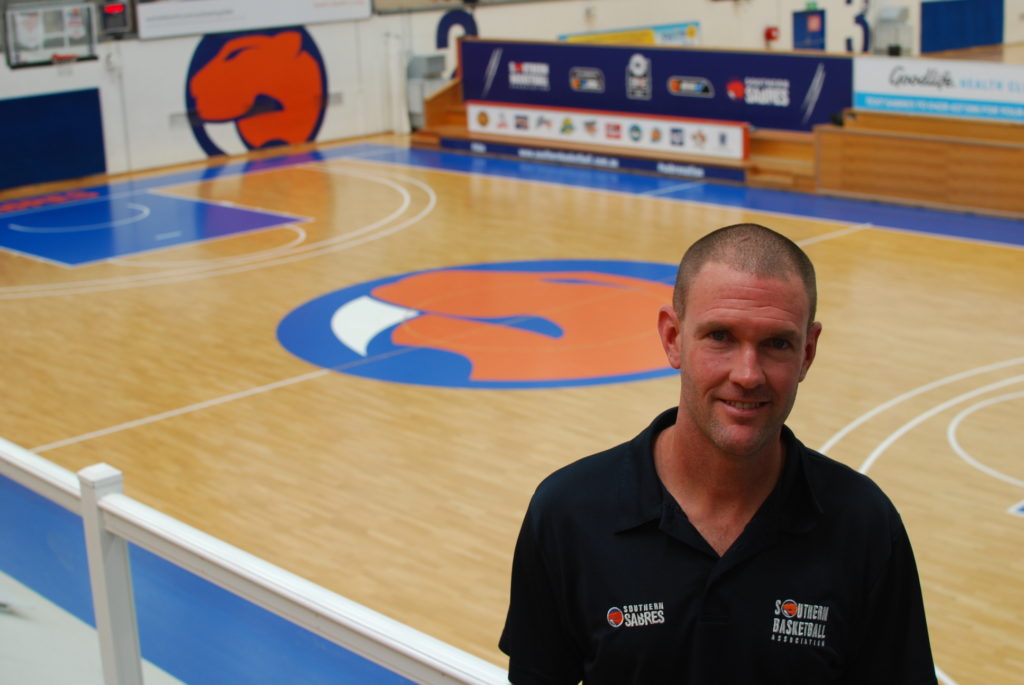 ONE of the most durable players in National Basketball League (NBL) history, Nathan Crosswell holds a formidable track record when it comes to basketball success. Enduring stints at the Victoria Titans, Victoria Giants, Melbourne Tigers and the Adelaide 36ers just to name a few, the new NBL1 head coach of the Southern Sabres certainly has extensive knowledge around the game of basketball. Draft Central sat down with Crosswell at the Sabredome on Tulip St, to recount the events of one of the NBL’s longest ever prospects.

Born roughly twenty minutes south of Byron Bay in the northern regions of New South Wales in the small town of Ballina, Nathan Crosswell found himself intrigued by the sport of basketball at a reasonably young age. Due to the small size of the town he resided, Nathan, or as most people know him, ‘Crossie’, spent the majority of his time playing on outdoor courts at his local school, in a competition made up of four teams from the Ballina area, and by the time Nathan reached under 14s, they finally had a roof to play under.

By the time Crosswell had reached around 10 to 11 years of age, his family had moved half an hour inland close to the town of Lismore, where he would get his first taste of a more intense brand of the sport becoming part of the Northern Junior League (NJL). Other teams within the NJL consisted of towns further South such as Grafton, Coffs Harbour, Port Macquarie, Taree and all the way down to Newcastle, as every fortnight Crossie and his team would cram into the team bus and travel up to six to eight hours each way, for a weekend that would consist of two or three games against other sides.

“It was a huge commitment from the other kids and the families and the coaches just to give us an opportunity to play a good standard of Basketball,” Crosswell said. “Otherwise we would’ve just ended up playing those same four teams every other week.”

Nathan got into playing basketball at a serious level through the NJL, but he was also exposed to the game at an early age, however the reason was a little bit closer to home. Brian Crosswell, Nathan’s father, would play in the local domestic leagues from which a young ‘Crossie’ would follow along and watch his old man compete.

While his parents exposed him to the game of Basketball, Nathan recalled his parents always pushing him to get involved in sports that he himself favoured personally.

“My parents were awesome in allowing me to play whatever I wanted,” Crosswell said. “I did a lot of soccer, I wasn’t very good at it, I also played a little bit of rugby league, not a lot. I just stood on the side because I was too scared, But my parents pushed me to do what I wanted.”

The next step for Crosswell was when he reached the under 18s, which led to him being coached by the brother of ex-Boomers coach Lindsay Gaze, Tony, who had moved up to Little Italy just south of Lismore, in a bid to breed Ostrich eggs, which fell through, ending in the growing of coffee trees.

After Tony Gaze had coached Lismore’s side for 12 months, Crosswell had to decide his next move as he approached Year 12. Tossing up options between Sydney and Melbourne, Nathan decided the latter, given his goal from day one was to really challenge himself in the sporting capital of Australia and make it to the top level of the basketball scene Down Under.

“As much as it hurt my mum to leave, I finished my school formal and the next morning me and my dad drove down to Melbourne to give Basketball a crack,” Crosswell said.

Gaze had organised the aspiring baller to live with his son’s family until Nathan had his feet on the ground and adjusted, while he shopped around for his spot in the Victorian melting pot of basketball players.

Remarkably, Crosswell earned himself a position in an under 20s squad at the junior program of the Melbourne Tigers under the guise of then-assistant coach of the senior side, Al Westover.

Nathan would constantly train with the NBL side throughout his time in the under 20s side, and then in 1999 when Andrew Gaze made his way to the San Antonio Spurs, that would give Crosswell a spot in the senior’s side as a “tenth man”.

“I didn’t play a lot throughout that year,” Crosswell said. “But for me, it was a massive learning experience playing alongside the likes of Lanard Copeland, Marcus Timmons, Warrick Giddey and Mark Bradtke.”

By playing with these stars, Crosswell gained an insight into the amount of commitment is needed to be a prominent player in the NBL at that stage. Off the court, Crosswell found it challenging to alter his bad habits when it came to dieting and the gym. But things would change for Crosswell when he left the Tigers and met the head coach of the Waverley Falcons, Vince Crivelli.

Crivelli, who still to this day remains very close to Crosswell, gave the aspiring basketballer the phone number of a Californian by the name of Brian Goorjian, the Victorian Titans coach notorious for pushing his players to their limits. After training with the Titans for what was his self-admitted hardest ever week of practice, Crosswell got the call to hang around with the squad as a reserve, which he credits most to the team’s strength and conditioning coach, Bruce Grey, for teaching him the fundamentals in taking care of his body.

“It was crazy man, we would do a spin class then go and train for two and a half hours,” Crosswell said. “At the end of training I could barely walk!”.

Following a year playing for Goorjian’s side in the NBL and signing a two-year extension, the Victoria Titans would fold as an organisation, which in turn would lead to Crosswell playing for the Victoria Giants for a couple of seasons before they too would cease operations as an organisation, which leaving his career in limbo following the 2003/04 season. Crosswell’s next move was decided after chats with both current Melbourne Boomers and then-Cairns Taipans coach Guy Molloy, as well as the coach of the Hunter Pirates in Adrian ‘Doc’ Hurley from where Crosswell decided to move up to Cairns.

The move up to North Queensland to this day is still a major highlight for both Crosswell and his wife Roslyn, because “the weather was unbelievable, and it was just an awesome lifestyle”.

Providing his services to the Taipans for two seasons, it was time to move back down to Melbourne where Nathan thought was home by that stage, and through good timing and the moving on of more senior players, Crosswell made the move in 2007.

Arguably Nathan’s best stint of playing years came between the years of 2007 to 2010, where he and his Tigers side would make three consecutive grand final series, which ultimately led to Championship success in 2008 for Crosswell and a sense of accomplishment for the boy from Ballina, as his side edged out the Sydney Kings in a down to the wire five-game series.

“It’s funny,” Crosswell said. “You kinda get where you wanted to get, and it is what it is. “For me it was always just a game and I played because I loved it and that was no different from those days when I was watching my dad play in Austinville to when you’re playing in front of 10,000 people at the Sydney Entertainment Centre, which was awesome to play in front of that many people, but I just wanted more.”

As well as being selected to the Boomers in that same year, Crosswell had never given much thought to possibly playing overseas in perhaps the Euro League or the States, “I’ve always been more of a home body,” Crosswell said. “I was comfortable being here and I loved playing in Australia.”

Closer to the end of Crosswell’s career, the veteran would move up to Townsville under Trevor Gleeson for just one season, then he made the move down to Adelaide where he would suffer a debilitating Achilles tendon injury in his first season at the 36ers. It marked the moment that Crosswell thought it might be time to wind down the clock on an illustrious career, but was still keen to finish a whole season on his own terms.

“I definitely wanted to do that last season (2012-13) and I probably knew that after having a conversation with Ross,” he said. “About halfway through the year I met with the Adelaide head coach and said this is what I’m thinking and didn’t really tell anybody until about the week before, but in my head, I kinda knew that this would be it.”

Crosswell would finish his 350th and final game at the NBL level on March 23, 2013 which culminated in his career being honoured at the NBL’s Gala Dinner that year standing beside another NBL great in Glen Saville.

“That was pretty special,” Crosswell said. “They had a highlights package of us on the screen and it was a really nice touch by the NBL on my career.”

Post-basketball life has been busy for Crosswell, playing a number of seasons in the South-East Australian Basketball League (SEABL), but also in a new role within the sport.

To this day, Croswell has been coaching junior basketball for a number of years at the Southern Sabres Basketball Association, which he has always enjoyed as a way of giving back to the game that he has been in love with since being a child on the outdoor courts in Ballina.

“If I can inspire one kid to wanna play then that’s great,” Crosswell said. “I just want to make it as enjoyable as I can for these kids because at the end of the day that’s why I started playing, not because someone was forcing me too. And if you can do that, the rest will take care of itself.”

A major highlight from Crosswell’s junior coaching career, included his Under 16 boys’ team back in 2014 coming fifth in the Basketball Australia National Junior Easter Classic. It has been announced that Crosswell will head coach this year’s NBL1 South side, the Southern Sabres, for the 2020 season, for which he is very excited due to the fact it’s his first senior coaching role. He also currently holds the position of Head of Mens’ and Boys’ Basketball at the Southern Basketball Association.

Nathan Crosswell finished his playing career with 350 games in the NBL, 223 games within the SEABL and 100 games in the Big V competition.