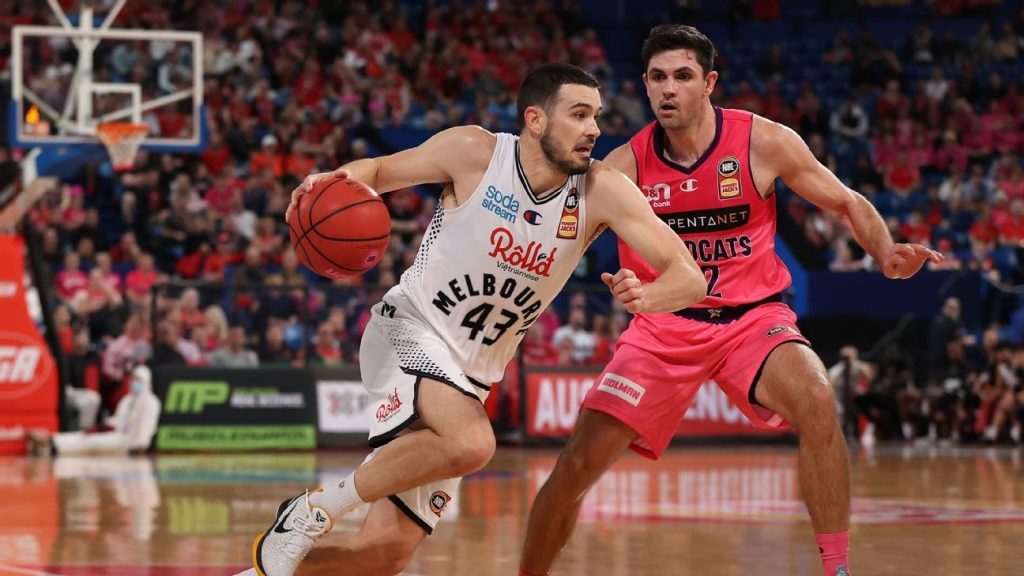 MELBOURNE United secured top spot on the National Basketball League (NBL) ladder with a win over rivals Perth Wildcats (78-64). The win gifts United the privileges of a home court advantage but will hoping that fans are allowed into the stadium given the current COVID-19 restrictions in Victoria. Nevertheless first place has long been Melbourne’s this season and this victory sealed the deal.

Although Perth were without two of their key contributors in Bryce Cotton and Mitch Norton that should not discount the magnitude of the win, with confidence key heading into finals. the loss marks Perth’s second straight loss while United managed their second win in a row to go with a full head of steam heading into the playoffs.

The Wildcats came out with a point to prove nailing the first five points of the game. The experienced head of Todd Blanchfield stepped up to the plate early, applying some strong scoreboard pressure. But that is where is stopped as the visitors upped the ante in both offence and defence to stop the Wildcats in their tracks and go on the attack themselves. The bench players in Yudai Baba and David Barlow were able to make their presence felt from down town landing a couple of handy threes. But the most impressive rally was when United piled on 10 points straight to round out the term as Jo Lual-Acuil carried the weight of the world on his shoulders credit to his six points. United established a commanding 12 point lead by the end of the first quarter and did not look like giving it up.

But the class of the Wildcats started to come to the fore as the reigning premiers proved they were not going to go down without a fight. Clint Steindl lent a hand in attack sinking a triple while Blanchfield also continued to do damage from beyond the arc. With their tails well and truly up the Wildcats were able to plug away at the margin using their smarts and skill to go on a points scoring spree of their own. Nailing six points straight to close out the term Perth were able to reduce the deficit to just seven points and give them a fighting chance heading into the second half.

The third term tightened up with both sides still trying to assert their dominance. However it was United that still had the upper hand as Sam McDaniel and Jock Landale played their part in keeping their sides noses in-front. After a quiet start to the game, Chris Goulding finally got his time to shine landing his first points of the game but the spirit of the Wildcats was still profound. Blanchfield and Jesse Wagstaff finished the term with a hot hand as the duo worked in overdrive to cull the margin to eight at the final change.

With the game on the line it was United that controlled proceedings, digging deep to keep the game on their terms and secure the win. The key figures inBarlow and Landale chimed in at the right time for United to keep Perth at bay and win the game by 14-points.

The contest between Landale and John Mooney was enthralling with the two barometers for their respective sides going head to head. However it is fair to say that Landale had the upper hand and was a key reason for United’s success as he produced 14 points and five rebounds. Lual-Acuil led all-comers with his 16 points and two assists off the bench while Mitch McCarron also had a point to prove draining 11 points and picking up six rebounds and five assists in the win. Goulding was down on his productivity recording six points and four rebounds as Barlow got busy in his 20  minutes on court with nine points and four rebounds to his name. Blanchfield was the most dominant scorer for the Wildcats finishing with 15 points at 35 per cent from the field. Luke Travers was a handy option for Perth recording 10 points and eight rebounds while Will Magnay also sunk 10 points and collected two rebounds and two assists.