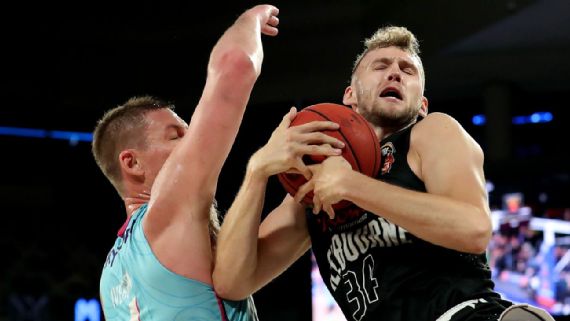 IT was not as easy as perhaps they would have liked, but Melbourne United have survived a scare from New Zealand Breakers to post a six-point win over their Trans-Tasman rivals at John Cain Arena last night. United won the first three quarters to go out to an unassailable lead, though the Breakers kept fighting and in a high-scoring last term, drew to within a single-digit deficit, only to fall short, 84-78.

Both teams were fairly even in the first term with the home team leading by a point at the first break, and then it was much of the same story in the second, with United again winning the quarter by a point, and therefore holding a 39-37 advantage at half-time. No matter what United threw out there, the Breakers were up for the fight. In the third term, Melbourne stepped it up to limit their opponents’ scoring and win the term 22-13 in a crucial, and ultimately match-winning quarter after the Breakers hit the front midway through the term. New Zealand found the way to the basket more in the final term, but it was a case of too little, too late and they went down in a brave, but unrewarded six-point loss.

It was an even contribution across the board for United, with former Breaker Scotty Hopson playing one of his best games of the season, finishing with 19 points, three rebounds and three assists, though Jock Landale was again the star. The big man was dominant with 15 points, 11 rebounds and three blocks, working hard defensively to deny the opposition. Chris Goulding was the other starter to have plenty of it, ending the night with 14 points, three rebounds and four assists.

Off the bench, Jo Lual-Acuil had double-digit points with 10, as well as four rebounds and two assists. Yudai Baba (five points, four rebounds, three assists and three steals) had a bit of everything in the back court, teaming well with Mitch McCaron (four points, six rebounds, five assists and one steal) as the creative ones. David Barlow (eight points, two rebounds) and Mason Peatling (six points, two rebounds) also added some scoreboard pressure off limited minutes.

For the Breakers, Finn Delany notched up 20 points in the first half in his best-ever game, single-handedly keeping his side in it with more than 50 per cent of his team’s points. He ended the contest with 33 in total, including 12 of 18 from the field and two of four from long-range. He had five rebounds, two assists and one steal as well, and was one of four players to notch up double-figure points. Colton Iverson was next best for the losers, narrowly missing out on a double-double of 10 points and nine rebounds.

Corey Webster had 13 points, three rebounds, two assists and one steal, whilst off the bench, Levi Randolph was impressive on debut, playing almost half an hour and having 11 points with a rebound and a steal as well. William McDowell-White held his own with nine points, eight rebounds, four assists and two blocks, in a game where the rebounds were crucial. Unfortunately the Breakers only had eight assists to United’s 19, and whilst they had less turnovers (12-14), were unable to topple the top side in the second half.

Melbourne United will have a short turn around to play tomorrow night at John Cain Arena again, up against Brisbane Bullets, while New Zealand Breakers will front up against Perth Wildcats at the Silverdome in Tasmania.