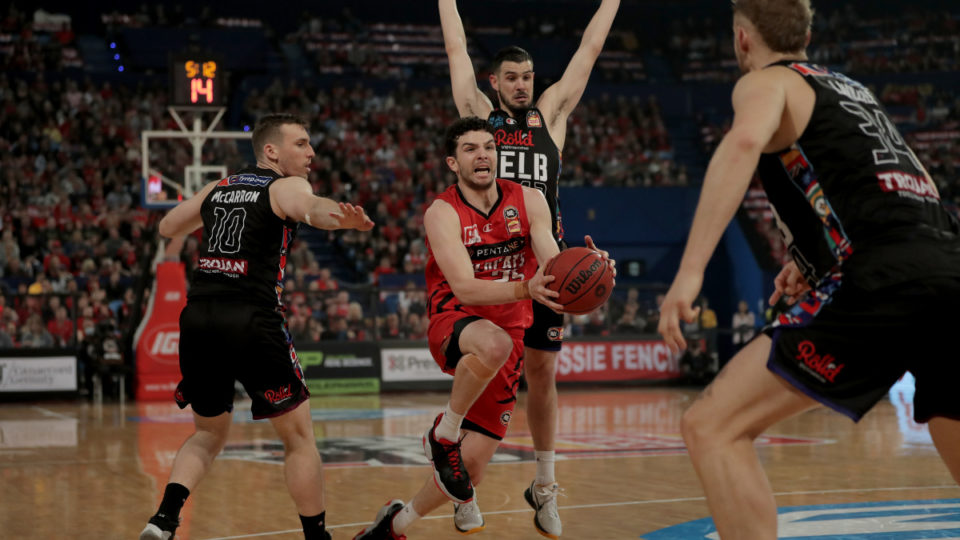 MELBOURNE United are one step away from claiming the ultimate prize toppling Perth Wildcats in Game 2 of the Grand Final series (83-74).  Backing up their performance from only days earlier, United got the job done at RAC Arena digging deep in the second half.

It was a blistering first term of basketball from Perth as the home side charged out of the blocks with a real point to prove. Only going down by three points in Game 1 it looked as if the Wildcats were out for vengeance nice and early despite missing the likes of Bryce Cotton, Clint Steindl and Luke Travers. It was always going to be hard to find scoring avenues but the Wildcats did not have that issue in the opening term as John Mooney and Will Magnay inserted themselves in the contest. United would not give in though as Chris Goulding picked up where he left off, finding his stroke from down-town alongside Jock Landale. But Perth were relentless piling on eight points straight and continued to attack the rim as Kevin White replaced Mitch Norton who was struggling with an injury he sustained in Game 1. By quarter time the Wildcats had established a handy 10-point lead to put them in good stead for the match.

Disappointed with their efforts in the first term United came out with a much more spirited performance to start the second, pegging away at the deficit thanks to eight straight points as Jo Lual-Acuil found his groove. It was not until Yudai Baba drained a three-pointer that United hit the front. But the twists and turns continued as the lead changed hands once again as Perth went on a handy nine point scoring spree to quash United’s momentum. With the clock ticking down to half time, Baba had other ideas as he landed one from three-point range before bringing the house down with a half-court shot on the buzzer to level the scores at 42 apiece.

With neither side really able to assert themselves on the contest it was United’s time to shine and that they did. Goulding showcased his leadership and grit to spur his side on as they rallied, adding nine consecutive points to establish a handy lead. but Goulding proved costly on the foul front notching up his fourth for the evening and subsequently pushing him to the bench. Credit to Melbourne’s defence the Wildcats were unable to find any easy avenue to the basket as Mooney was shut down and Todd Blanchfield struggled to have the same impact he did in Game 1. United controlled majority of the term despite a couple of late points from White and Magnay to get the three quarter time buffer to five points.

It was all coming down to the final quarter with United looking to close out the game and the Wildcats hoping to do the unthinkable and flip the script to notch up a win. But that was not to be, as Melbourne got busy in the first couple of minutes with Scotty Hopson opening the account with a jump shot to set the wheels in motion. Goulding was re-injected back into the action with the captain impressing with his dominance from beyond the arc . Things just continued to steadily tick along for United as their class and depth shone through against a depleted Perth outfit.

Mooney was the main playmaker for the Wildcats producing 17 points and nine rebounds while Blanchfield was down on his Game 1 efforts finishing with 13 points and eight rebounds. Norton managed 12 points in his 27 minutes while White also chimed in with a handy 12 points and two rebounds. There were a few more contributors for the victors but once again it was Goulding that led the way sinking 21 points at 50 per cent from the field. His dominance from three-point range was a standout draining four shots from seven attempts. Landale racked up a double-double thanks to his 12 points and 17 rebounds, 15 of which were defensive while Baba had a game to remember sinking 15 points and four rebounds. Lual-Acuil was the only other player to reach double figures with 10 points as Hopson walked away with nine points to his name.

Game 3 will be played at John Cain Arena as Melbourne United look to seal the deal with a win and secure the coveted premiership. But it will not be easy given Perth are back-to-back champions for a reason and will be eager to make amends for their shortcomings.