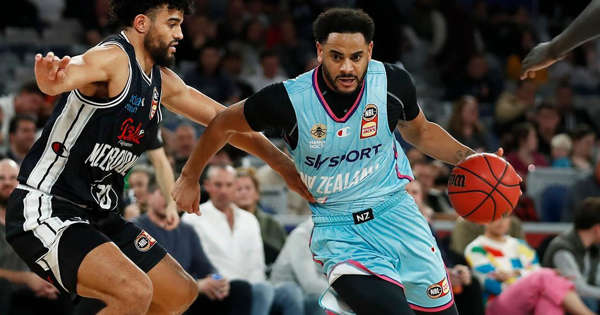 MELBOURNE United are flying along extremely nicely having notched up their tenth consecutive win last night, defeating the New Zealand Breakers (90-76). In their first of three games of the round, United came out with a point to prove early and did just that against a flailing Breakers outfit, who despite showing glimpses of magic have struggled for continuity. However the win will be very little consolation if they are without Jock Landale who went down early on in the piece, and has been a significant piece of the puzzle in season 2021.

With Landale gone in the opening minutes of the game it was up to the players around him to pull their socks up and deliver, and that they did with Jo Lual-Acuil and Scotty Hopson relishing the added responsibility. But the efforts of captain, Chris Goulding really stole the show as he drained a whopping 14 points in the first six minutes of the game to well and truly set the tone of the match. Inspired by a home crowd, Melbourne United took control of the game and continued to push the Breakers to their limits as they skipped out to a nine point lead at quarter time.

It was a much tighter second quarter as reflected through the quarter scores as Melbourne slotted 15 points to 14 credit to an improved effort from the Breakers. Goulding started to cool off, but that only paved the way for Lual-Acuil to get busy as he kept the scoreboard ticking over. Hitting double-figures before half time Lual-Acuil proved he was here to play and provided a steady head for United despite the constant attacking forays from the Breakers as they attempted to eat into the margin. Colton Iverson worked hard to get New Zealand back into the game landing some crucial free-throws but it was somewhat of a one-man show on the scoring front.

The Breakers sent out warning shots in the third quarter as they started to rally across the court with William McDowell-White getting busy and slicing the deficit to a mere four points. But once again the experience and class of Hopson and Lual-Acuil shone through as they hit the scoreboard to re-establish that handy buffer. Playing with confidence and belief United were able to weave the ball down the court with ease while also nullifying the likes of Corey Webster and Finn Delany who had been in scintillating form heading into the round.

With the lead getting out to as much as 20 points one stage during the final quarter, the Breakers dug in deep to deny United’s offence space and inflict pain up the other end as they attacked the rim. They pressured United every step of the way putting up 22 points to 24 as they cut the margin to 14 at the final buzzer.

Although the Breakers did not get the win it was a special night for captain Tom Abercrombie who surpassed all-time game leader Mika Vukona running out for his 355th game and notching up 11 points. Webster was the most prominent scorer out on court for the Breakers producing 20 points at 50 per cent from the field, along with two rebounds, six assists and three steals. McDowell-White has settled in nicely to the Breakers outfit sinking 12 points, seven rebounds and four assists while Delany was down on his usual production levels with nine points and five turnovers. Iverson got busy with his nine points and seven rebounds but it was not enough.

When looking at United, the points were relatively evenly shared between their three main prongs in Lual-Acuil, Hopson and Goulding. After impressing in the opening term, Goulding quietened down to finish with 19 points, three rebounds and three assists. Hopson rekindled his form with a strong showing of 25 points in just under 20 minutes, highlighting just how impactful he can be when on song. Lual-Acuil fell just short of a double-double thanks to his 23 points and nine rebound effort while Mitch McCarron provided good support with his six points, two rebounds and three assists.

The win is a franchise best, with the side running hot on 10 wins straight and will be looking to continue that momentum heading into their clash against Sydney while the Breakers are faced with another challenge in the second placed Perth Wildcats.