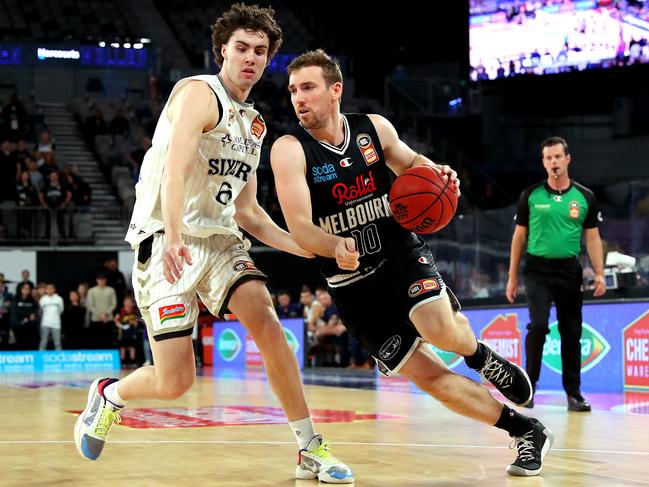 MELBOURNE United kept their winning streak going, notching up their ninth straight victory after defeating the Adelaide 36ers in style last night (92-78). It was a comprehensive performance by the ladder leaders who got the jump on their opponents early but really dazzled in the final term to pile on the scoreboard pain.

The Adelaide 36ers welcomed back the services of injured star Isaac Humphries who had been out of action for two months. However it took a while for Humphries to get back into the groove of things. He was not the only one welcomed back after injury with Tony Crocker also finding his way back into the side.

The first term was dictated by United as their offensive nous came to the fore, able to consistently open up the 36ers’ defence and pile on the pressure. Chris Goulding was proving to be crafty with ball in hand providing opportunities for Mason Peatling to attack the basket and give their side the competitive edge heading into the break. The 36ers however did not lie down, showcasing their strength on the rebound while Brandon Paul flexed his muscles delivering eight points in the opening term alone. In saying that, United still held a handy six point buffer at the first break despite the efforts of Adelaide.

There was a change in intensity in the second term, as the 36ers knuckled down and got busy. Adelaide came out with a point to prove steadily eating into the margin, posting 25 points to 20 in the term inspired once again by the services of Paul. Jock Landale looked to keep United in front with teammate Jo Lual-Acuil also displaying his class out on court with some big defensive plays. At half time only one point separated the two sides, testament to the increased pressure from Adelaide.

Scoring somewhat dried up in the third with both sides remaining in the teens when it came to points scored. Melbourne recaptured some of their earlier dominance, nullifying the speed and transition of Adelaide to create some much needed scoreboard separation. The star power of Landale and Paul was on full display throughout the third as the pair impressed for their respective sides with their shooting prowess.

It all came down to the final term and that is where Melbourne United pulled out the big guns. Their level of depth and all-round confidence was paramount as they out worked and outmuscled Adelaide to edge ahead bit by bit. The introduction of David Barlow proved to be the exact spark the side needed as the 37-year-old showed that age is just a number worrying the scoreboard knocking back consecutive threes and an impressive dunk to wow fans. He exploded out of the blocks as his energy filtered through to his teammates with Mitch McCarron also coming up big as the scoreboard ticked down. Melbourne had complete and utter control of the final term once again proving why they sit atop of the ladder with their ability to grind out games and win in tricky situations.

It was a night to remember for McCarron who collected a season high 21 points. But it did not stop there as he also reeled in two rebounds, five assists and five steals in a comprehensive performance by the guard. in fact the points were well shared amongst a number of players with four others reaching double digits. The next best was Landale who produced 19 points in his 30 minutes on court while also amassing 10 rebounds. Both Goulding and Lual-Acuil managed 13 points apiece with the latte feasting off the boards thanks to his 10 rebounds. Peatling was the other to reach double-digits with 11 points to his name but also got busy in offence with five rebounds.

Paul was the leading points scorer for the 36ers, sinking 20 for the game at 53 per cent from the field. In his 300th game, Daniel Johnson had another strong outing draining 16 points while also providing a helping hand off the boards with nine rebounds. Youngster Josh Giddey continued to ply his trade thanks to his 14 points, 10 rebounds and seven assists just falling short of a triple double while Sunday Dech made his presence felt thanks to his 12 points. In his return from injury, Humphries slotted two points and managed five rebounds as Crocker also produced five points.