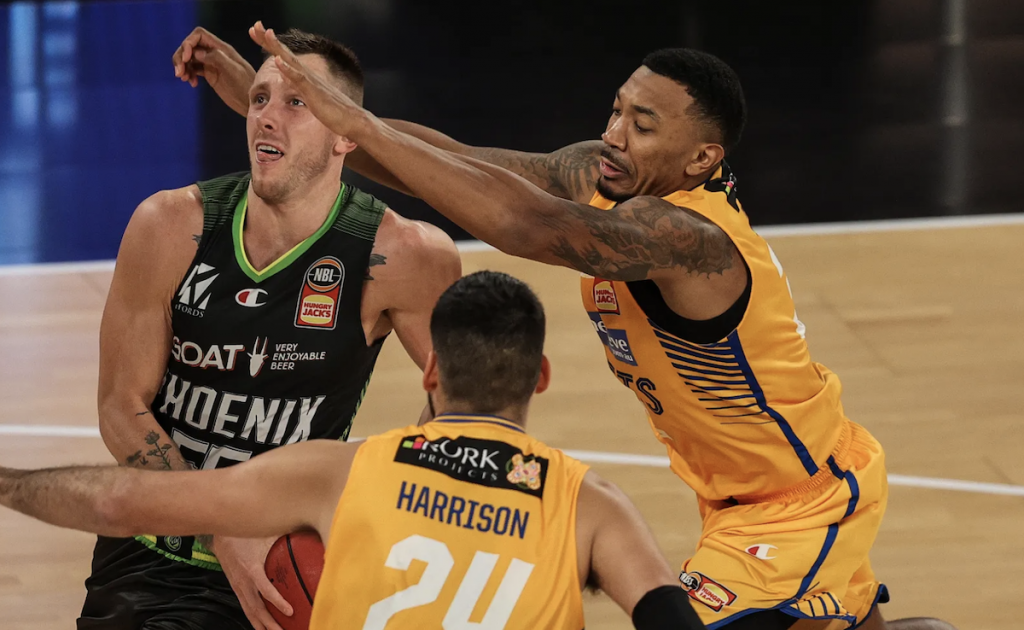 WITH both the Brisbane Bullets and the South East Melbourne Phoenix coming off their biggest victories of the season, the two teams battled in yesterday’s opener for three out of four quarters, before the Phoenix ran away 99-83 winners after a 31-point fourth quarter – placing their record above .500 with their fifth win of the season.

The Bullets came into Melbourne on Sunday ready to play, landing the first punch and startling the Phoenix throughout the first 10 minutes, as Brisbane led 27 to 16 after an impressive 15-point run headlined the opening term.

Reinvigorated by team leaders Mitchell Creek and Adam Gibson during the first break, South East Melbourne opened the second with a 15-6 start, all but clearing the margin mid-way through the period.

Some impressive work by Matthew Hodgson and Nathan Sobey was enough to stave off a resilient Phoenix fightback. But after two, Simon Mitchell and his guys had tied things up already. While both teams were locked up at 44 points apiece, Creek was phenomenal through 20 minutes, harbouring 20 points and four rebounds already, while Sobey, Hodgson and Anthony Drmic had combined for 33 points in the same amount of time.

Seven consecutive points by the Phoenix to commence the second half dumbfounded the visitors, instilling the entire Green Team to step up their game in what appeared to be a pivotal moment of the contest. In another twist, Brisbane produced a nine-point run of their own shortly before the five-minute mark of the third, making for an entertaining final 15 minutes.

Keeping their noses in front 68-66 with a term to play, Keifer Sykes and the Phoenix had another great start with a 10-0 effort to put the side up by 12, placing South East Melbourne firmly in the driver’s seat.

The Bullets continued to fight in the dying stages of the meeting cutting the deficit to as little as nine points. However, a three from Cam Gliddon with seven seconds on the clock iced the game, while Sykes earned his triple-double at the start of that same possession just before the Phoenix closed out the win.

An impressive shooting night best described the Phoenix’s overall game, converting on 39 out of 76 shots (51 per cent) from the field last night, while doling out 23 assists in the process. For Brisbane, their biggest detriment was their inability to slow down South East Melbourne from deep, allowing 13 triples and only producing six of their own.

Finishing with 29 points, nine rebounds and an assist, Creek emerged supreme as the game’s leading scorer, but man of the match honours was unequivocally awarded to Sykes after he secured a 14-point, 11-assist and 10-rebound triple-double. Gliddon ruled from beyond the arc with 19 points off of five threes in 36 minutes of play, whereas Kyle Adnam had another strong outing with 15 points and six assists.

Hodgson showed up with an elite level of focus making nine out of 10 shots on his way to a team-high 20 points and nine rebounds. Sobey who leads the NBL in scoring was held to a modest 16 points, six rebounds and four assists as Coach Mitchell had a great game plan in place to neutralise the star. Lastly, Drmic was large off the bench with 16 points and four rebounds as well posing as the only other double-digit contributor – Vic Law finished with a lowly nine-point performance.

The Phoenix will look for the two-win week when they challenge the Adelaide 36ers on Tuesday night to conclude Round Six, whereas the Bullets will take aim at the Illawarra Hawks on Friday night.