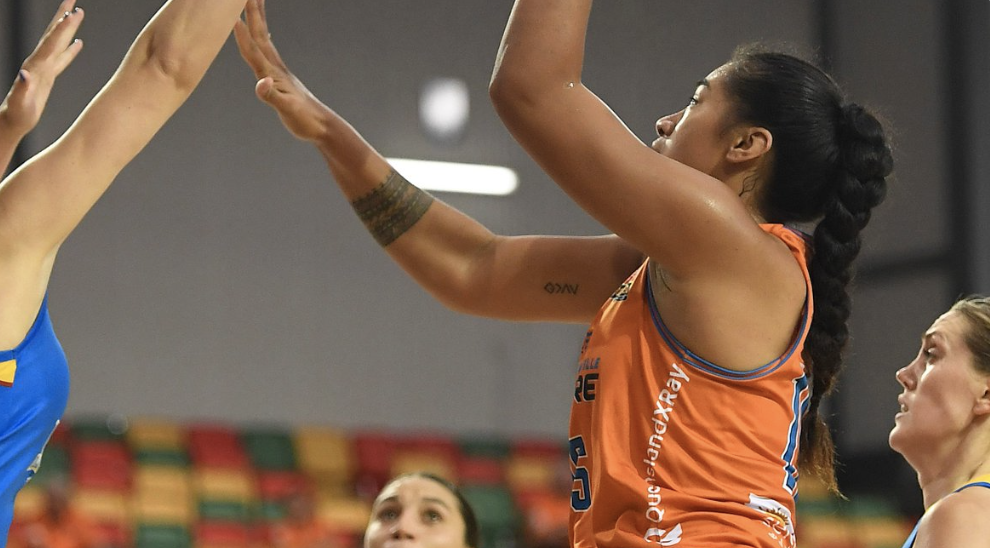 IN the space of about five minutes, the Townsville Fire flipped the script in yesterday’s clash against the Bendigo Spirit, outscoring them by 17 points in the third quarter to ride home their third win of the season 91-81. Meanwhile the Spirit are still searching for the required recipe to win their first game of the campaign, as their losing skid extends to five games.

Bendigo pushed the pace early in the first quarter, getting out to a 17-5 lead halfway through the opening period, which completely dumbfounded the Fire’s defence in the process. This would dominate the headlines in the opening 10 minutes, but six-straight points from Townsville brought the deficit to a more respectable number with some much-needed momentum.

A late And-One from Tessa Lavey repositioned the Spirit with a commanding quarter time lead ahead 26-15, as each of Bendigo’s starters got their names on the scoresheet early on with a 50 per cent conversion rate aiding them.

However, head coach Shannon Seebohm relied on his side’s depth to help will them back into the contest trailing by just four points at one stage in the second. Nevertheless, back-to-back threes from Mary Goulding and Cassidy McLean would sour the Fire’s momentum just a few moments later, re-establishing the double-digit advantage.

Saving the day in the first half for the Fire was Megan McKay, who earned her minutes with her rebounding, totalling six boards through the first two periods along with seven points. Bendigo would conclude the opening half with the lead after two quarters for the first time this season, 47-40, as Lavey led the way with 12 points and six assists while Goulding had herself 13 points as well. Meanwhile, Townsville’s leading scorer in Lauren Nicholson had 11 points throughout all 20 first half minutes.

As Townsville gradually tightened the deficit, Shyla Heal was huge with her mid-range game, knocking down three-straight buckets to pressure the Spirit further and then eventually tally her thirteenth point of the match to put the Fire in front six minutes into the third.

Despite Carley Ernst putting up substantial numbers in the third, Townsville flipped the game on its head and did the same themselves. A 29-11 third quarter for the Fire would reverse the roles for both sides with the score sitting at 69-58 in favour of this season’s hosts. Two early buckets from Bendigo’s duo Lavey and Ernst, provided promising signs early on in the fourth for the Spirit, but the Fire’s tall frontcourt consisting of McKay, Mia Murray and Zitina Aokuso hustled enough in the later stages of the game to fend off Tracy York’s side long enough to get the Fire over the finish line.

A slow start to the game for the Fire was remedied in the second half, allowing them to earn the come from behind win and put their record at three wins and two losses after their hard-fought 91-81 victory. Townsville’s backcourt was instrumental in the win, with Heal being a key contributor against her former side after her 22 points, six rebounds and three assists next to Nicholson’s 20 points and three rebounds. Aokuso also provided a major boost in her 25 and half minutes of play, putting up 21 points and five rebounds.

These performances will need to continue in one way or another as they size up the Melbourne Boomers later today in the second leg of their weekend double-header.

On the other hand, it can easily be argued that yesterday’s efforts from Bendigo involved numerous highlights, a number of those being individual performance like Lavey and Goulding’s 19 points apiece. It also slots nicely next to Ernst’s 15 points, eight rebounds and five assists. The Spirit’s lesser victories in yesterday’s clash put them in good stead for their upcoming meeting on Tuesday against the Fire for a second time, where we will get to see if Coach York changes her tactics in the repeat fixture.

ANOTHER impressive wining margin lined the belt of the Southside Flyers last night, as their 12-player roster came back from an early deficit in the opening period to emerge on the other side with another statement win, following a 46-point thrashing of the Perth Lynx, 117-71.

As mentioned, the opening moments of the contest occurred from deep as the first five made field goals from both teams came from three-point range, with Darcee Garbin and Katie Ebzery leading the charge.

With play settling down slightly and the tempo slowing, Perth continued to make their shots count, knocking down their first five attempts from behind the arc, while Liz Cambage did her best to quell the Lynx’s shooting lethality in the opening phase, with 13 points at the first break.

Five triples from Perth and 21 combined points from Garbin and Ebzery helped the Lynx to a 26-21 lead heading into the second, as Flyers captain Jenna O’Hea found early foul trouble. Still, Cambage commenced the second the same way she finished the first by putting the ball in the net, before Stephanie Blicavs tied things up a minute into the second term.

With every minute that went by in the second, the Flyers picked apart Perth’s offence more and more. At the conclusion of the first half, Southside had forced 10 turnovers from the Lynx, which in turn would lead to 18 points from takeaways and a 54-42 lead at the main break.

Unable to derail the Southside train, Perth’s care of the basketball continued to waver with their turnovers accumulating into the third quarter still. Capitalising on this, Cole increased her statistics while the Flyers’ secondary unit contributed to the blowout third period which saw Southside tally 35 points compared to the Lynx’s 14 and hold a commanding 89-56 lead.

Despite the result being determined prior to the start of the fourth, both coaches saw it suitable to let their younger prospects earn some ample WNBL court time. Both Rebecca Pizzey and Monique Conti impressed in the fourth for the Flyers, while Perth’s Jewel Williams had a couple of memorable moments to add to her night.

Match proceedings would end with Southside winning in rather fashionable form, coming out 46-point victors in the 117-71 demolition of Perth. It was the combined efforts of Cambage (21 points and seven rebounds), Cole (20 points and five assists) and Sara Blicavs (19 points and six rebounds) that accounted for the majority of the Flyers’ success last night, which bodes well for the squad as they get their chance at redemption in Monday’s Grand Final rematch against the Canberra Capitals.

For the Lynx, it was Garbin’s show, following what was a red-hot first quarter which ultimately culminated in a 24-point and seven-rebound outing, whereas Ebzery (13 points and five assists) and Alex Sharp (10 points) added chunks of points to fill out the box score. Perth has a chance to bounce back against the Sydney Uni Flames on Monday as they hope to gain some traction in the mid-table logjam, in a season that could easily slip away from Ryan Petrik’s side if they cannot find positive results soon.

THE University of Canberra Capitals have solidified themselves as serious contenders in the WNBL this season, after obtaining their fourth win in a row following a scrappy affair against the Sydney Uni Flames, winning by five points 68-63 to close out yesterday’s trio of games.

Little could separate the Flames and the Capitals early on, but the efforts that Anneli Maley made in the opening 10 minutes proved fruitful for Sydney Uni, with the 22-year-old fighting towards seven points and five rebounds in that time. Coupled with Lauren Scherf’s six points, the Flames would pull away at the end of the first quarter leading 23-11 and forcing eight turnovers off of Canberra in the process.

No Capitals players stood out tremendously in terms of scoring during the first half, but rather Paul Goriss’s side spread out the points production after reducing the deficit to just a couple of baskets during the second quarter.

The same could also be said for the Flames, but their method of scoring was slightly different, as they found the majority of their points from either mid-range, the free-throw line or through second chance points, whereas Canberra kept punishing Sydney Uni in the paint with baskets around the rim.

Leading 39-32 at the main break, the Flames shot average at best, converting on 37 per cent from the field, but Katrina Hibbert’s side inherited a huge boost thanks to their 11 free throws (eight more than the Capitals). Furthermore, Lauren Mansfield started to find her stroke with 11 points after two terms.

Things in the third did not start any better for the Capitals, as they fell behind by double-digits. But a strong move by Marianna Tolo and a fast-break And-One by Tahlia Tupaea made the contest a tight one well into the third.

An 11-4 run by the Caps with three minutes remaining in the penultimate period had Canberra nipping at the heels of the Flames in what was shaping up to be a sprint to the finish line, where either side were threatening to take over.

To round off a tumultuous third phase, a beautiful assist and bucket on consecutive possessions from Kelsey Griffin would secure the Capitals a four-point lead with 10 minutes remaining 57-53, and with Maddison Rocci leading the charge submitting 14 points and four rebounds, a win was certainly within view.

Both sides fought tooth and nail in what was a perfect way to finish off yesterday’s fixtures, where plenty of bodies hit the deck, missed shots were contested by multiple individuals and loose balls were jumped on by both teams in hard-nose smash-mouth brand of basketball. But Canberra seemed to be wading away midway through the fourth and Coach Hibbert’s side needed a dramatic boost with less than five minutes remaining.

With 48 seconds remaining, the game hung in the balance for both sides with one point being the difference. Luckily for the defending champions, Griffin was able to force Mansfield’s fourth turnover and again strip Alison Schwagmeyer just 30 seconds later, which cemented the victory for the Capitals after Keely Froling laid up the game-sealing bucket with three seconds left, therefore allowing Canberra to win the contest 68-63 in a down to the wire slugfest. The victory continuing their winning streak to four games.

It was another impressive night for Rocci, who had 17 points and five assists to show for last night’s efforts, as more of Canberra’s contributors from last season added solid performances. Griffin (11 points, nine rebounds and four assists) and Froling (15 points, 10 rebounds) provided relief on the boards, while Tolo also tallied 13 points of her own. The Capitals now need to hunker down and prepare for a formidable Southside Flyers squad that is still stinging from their Grand Final defeat last season, a side that has also significantly improved since then.

The Flames had their regular performers on display again, as Scherf led the way in scoring with 19 points. Whereas, Maley had another double-double night with 13 points and 12 rebounds next to Mansfield’s 16 points from 36 minutes on the floor. Sydney Uni now have their own concerns considering they now find themselves on a three-game skid and are tied for second-last with the Perth Lynx, who they face next on Monday in a game that will prove to be crucial regarding the future of the fourth seed.