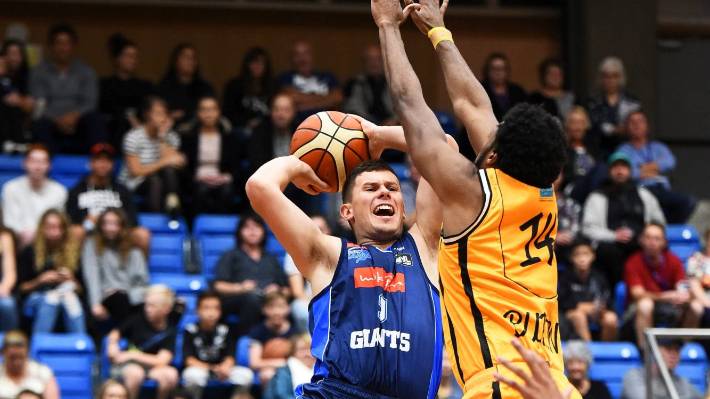 BASKETBALL fans need to wait just one more week for the first tip-off of the 2020 Sal’s National Basketball League (NBL) Showdown. Whilst all 10 games will undoubtedly be popular, we have picked out five that might have some extra meaning to them and should be put in the calendar.

1 The Opening Tip-Off – Airs vs. Giants

After months of waiting for any sort of basketball being streamed around the world, expect a big crowd to tune in to this clash which tips off next Tuesday, June 23 from 5.30pm. Mika Vukona takes to the court for the Giants once again in what should draw fans into the match, not to mention the long withdrawal symptoms of not being able to attend live sport. With his new partner-in-crime Mike Karena joining the Giants, and Dane Brooks there as well, the Nelson-based side should be a strong contender this year. The Mountainairs picked up a couple of great talents themselves with Derone Raukawa picked up with the second selection, whilst Marcel Jones was a huge steal at pick 12.

2 The Battle for Auckland – Bulls vs. Huskies

Entering the 2020 season there are now two Auckland-based sides (ignoring the fact all seven are technically Auckland-based sides for the six weeks), and those sides are the two newest teams in the competition. Auckland Huskies enjoyed a name change and returned to New Zealand from Tasmania for a second season, whilst Franklin Bulls are yet to play an official match. With both teams having the opportunity to draft Auckland-based players – and one team after the other no-less – it will be a huge clash to see which side comes out on top. The first clash between the sides takes place on the final day of Week 1 – Sunday, June 28 – from 5.30pm local time. The big draw card? Auckland Huskies’ Leon Henry rejoining forces with his former Wellington Saints coach, Kevin Braswell against the side he was initially going to captain this year.

3 The Nuggets return – Jets vs. Nuggets

Whilst we spoke about the two newest sides, once cannot help but enjoy the nostalgia of a return to the court for the Otago Nuggets. Returning for the first time since 2014, the Nuggets’ first match is up against the Manawatu Jets on Wednesday, June 24 at 5.30pm. Number one draft pick Jordan Ngatai will be in action and will catch the headlines, but one cannot forget Jarrod Kenny who could well make other teams look silly slipping all the way down to pick 14 in the draft. The Jets hope to rebound from a disappointing last placed finish in 2019, and with Tom Vodanovich and Hyrum Harris as a one-two combination, they have enough firepower off the boards and putting up big numbers to worry a lot of teams this season and the Nuggets are the first.

This match is more about the establishments themselves compared to the players on-court. The Canterbury Rams are arguably the most settled side, taking a majority of its list, either from last season or earlier this season into the 2020 Sal’s NBL. On the other hand, the Bulls have a new-look list entering the league for the first time, with even their intended 2020 captain heading to the other Auckland side. Many predict the experience of Jack Salt, Taylor Britt and Joe Cook-Green will be too much early in the season, gelling quicker than other sides such as the Bulls who might only meet on court together for the first time a few days before the season. Expect Dominique Kelman-Poto and Sam Timmins to have something to say bout that in what should be an epic contest. The match takes place on Thursday, June 25 from 7.30pm.

The special moment about the final game of the round – scheduled for 7.30pm on Sunday, June 28 – is the fact that fans will know that a full 10 games have been played and the first shape of a ladder will begin to take place. Every team will have played three matches except for the Otago Nuggets who will have a game in hand heading into Round 2. For the Giants and Jets, they head into the final match with both having played the Nuggets, whiles the Giants also faced off against the Airs on opening night, whilst the Jets are coming off a clash with the Huskies the night before. How much will rest have on the competition this year, with the Giants having the extra day to prepare for the game. A battle between Vukona and Karena against Vodanovich and Jones will be just what the doctor ordered to wrap up a huge first week of action.

TO CATCH ALL THE ACTION LIVE FOR THE AUCKLAND-BASED SUPPORTERS, CLICK HERE TO FIND OUT ABOUT TICKETS VIA THE NZNBL WEBSITE.