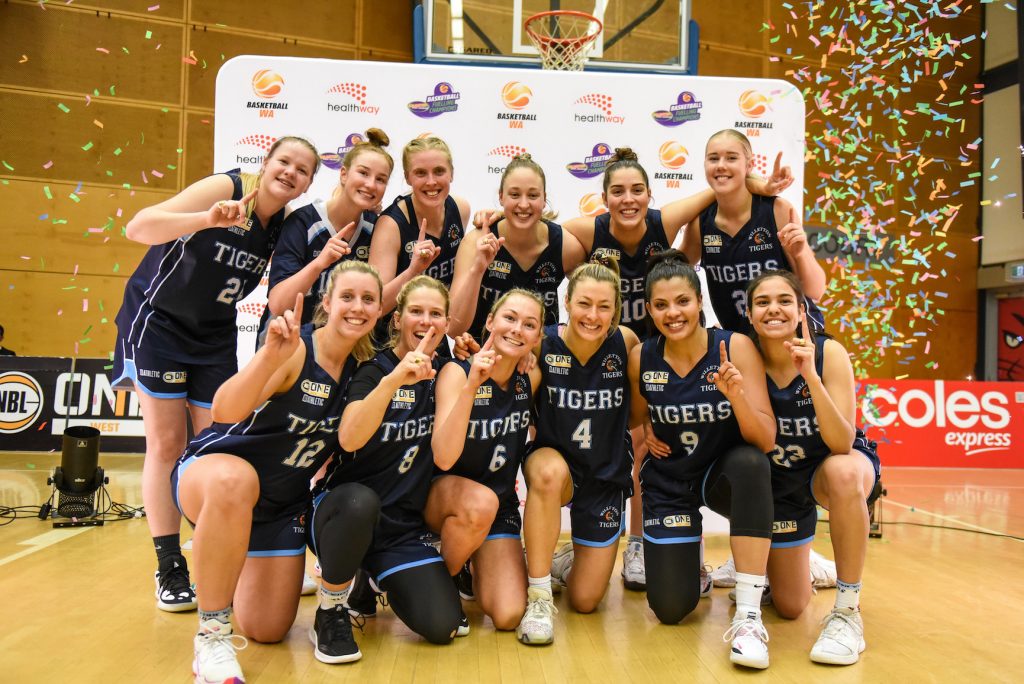 WILLETTON Tigers are the official 2021 National Basketball League (NBL)1 West women’s champions after knocking off Joondalup Wolves by 11 points in last night’s grand final. In a momentum-swinging game with not much between the sides all night, it was the last term that saw the Tigers burst away and secure the title, credit to a strong defensive performance at Bendat Basketball Stadium.

The Wolves proved they had come to play in the match by winning the opening term by a point, 16-15. The home team soon got on top though, piling on 23 points to 15 in what was by far the most offensively charged quarter, with 38 total points. It would not be as simple as running away with it in the second half however, as the Wolves got back on top to score 18-12 in the third term and cut the final break deficit to a single point. It would matter little anyway as a superb defensive effort off the boards – coupled with inaccuracy from the Wolves – resulted in Willetton winning the last term 15-5 to take home the win, 65-54.

The efficiency from the field was low, with the Tigers shooting at 32.84 per cent, but still higher than the Tigers’ 26.67 per cent off eight more shots. Both were below 25 per cent from beyond the arc with the pressure in the match, but it was Willetton’s dominance from the rebounds (56-48) and assists (19-11) that really stood out between the sides.

Alex Sharp came to play with a huge double-double of 13 points, 15 rebounds and four assists to earn match Most Valuable Player (MVP) honours to back up her league MVP effort from the year. Whilst only shooting four from 12 from the field – a trend across the match – Sharp was influential off the defensive boards. She had a great battle with opposing talent Kayla Steindl. The Wolves retiree put up 16 points, 15 rebounds – 13 defensive – three steals and two assists, though again did not hit any of three-point attempts from seven chances for an overall efficiency of 35 per cent.

Desiree Kelly hit 16 points, seven rebounds and three steals in another strong effort from the Tigers side, with Samantha Lubcke (13 points, eight rebounds, two assists and two steals) and Hayley Winter (11 points, six rebounds and five assists) also key in the victory. With the four double-digit scorers producing the goods, Emma Gandini finished with a solid eight points and seven rebounds, as well as two assists in her time on court, while Taryn Priestly set up four assists to match her four points in 16 minutes.

For the Wolves, Steindl was the only double-digit scorer, though a few came close. Neseya Parker-Williams had the nine points, eight rebounds and three assists to be the next best, followed by Chelsea Belcher (nine points, four steals and three rebounds). Tia Ucich (seven points) was the other scorer with more than five points, while Amber Land picked up seven rebounds – including a game-high four offensive – along with three points, in the loss.

With the season over, the Tigers can go home with the official inaugural NBL1 West women’s division title, whilst Steindl finishes up her career with a great performance despite not getting the win.