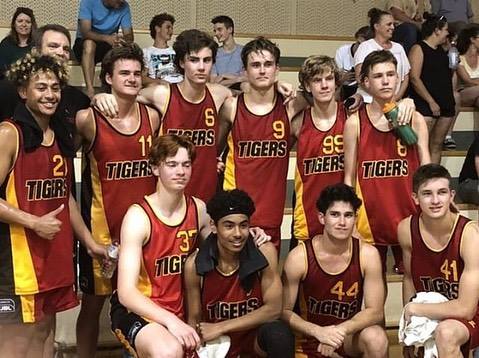 MELBOURNE Tigers have taken out the Under 18 Mens division at the recent 2019 Eltham Dandenong Junior Basketball Tournament, defeating Kilsyth in the Grand Final by 24 points. Both sides are considered among the top contenders for this year’s Melbourne United Victorian Junior Basketball League (MUVJBL) championship division.

Patrick Twigg was the highest scorer for the Tigers, finishing the Monday, January 28 decider with 17 points, including one three-pointer and 14 points from inside the arc. He was far from alone, however, as Ezrah Vaigafa finished with 13, while Vic Metro Under 18s inclusion, Josh Giddey scored 11. For Kilsyth, Ned Dillon scored 12 points to be his side’s highest scorer, while Roosevelt Williams (seven) and David Okwera (six) also got amongst the scoring.

The big difference was the points inside the arc, with 44 of Melbourne’s 61 points coming from two-point range. A small differential of 12-9 outside the arc in the Tigers’ favour also assisted in the overall win.

Earlier in the day, Melbourne overcame Keilor in a tight, 12-point affair, while Kilsyth reached the decider courtesy of a narrow six-point win over Dandenong. Vaigafa finished with 15 points – including an impressive three triples, while Twigg and Giddey both had nine apiece, as did Jordan Adams. For Keilor, Jeffrey Ofoedu and Tonga Matapule Otutaha both scored 13 points, while Paul Tsapatolis sunk 11. In the other semi-final, Williams was the only scorer in double figures with 17 points, ahead of Okwera (nine), while Josh Duach and Lachlan Vandervorm both scored eight. For Dandenong, Leyi Adebayo, Riley Simmons and Zac Taylor all top scored for the Rangers with seven points apiece.

Other teams who impressed through the group stage were Diamond Valley – who finished above Keilor in their pool, but went down to Kilsyth in the elimination final – as well as South Australian side, Sturt and Nunawading – who were knocked out by Dandenong and Keilor respectively. Waverley – the other quarter finalist – exited after a 10-point loss to Melbourne.

In terms of top point scorers, Dandenong’s Simmons averaged 15.29 per game, just ahead of Keilor’s Tsapatolis at 14.14. Melbourne’s Giddey averaged 14 points per game and held the highest total points with 112 from eight games, while James Roche (Nunawading) averaged 14 points per game from six matches. Sturt’s Sebastian Griffin was the other big scorer, sinking 81 points in his six games to average 13.5 throughout the tournament.