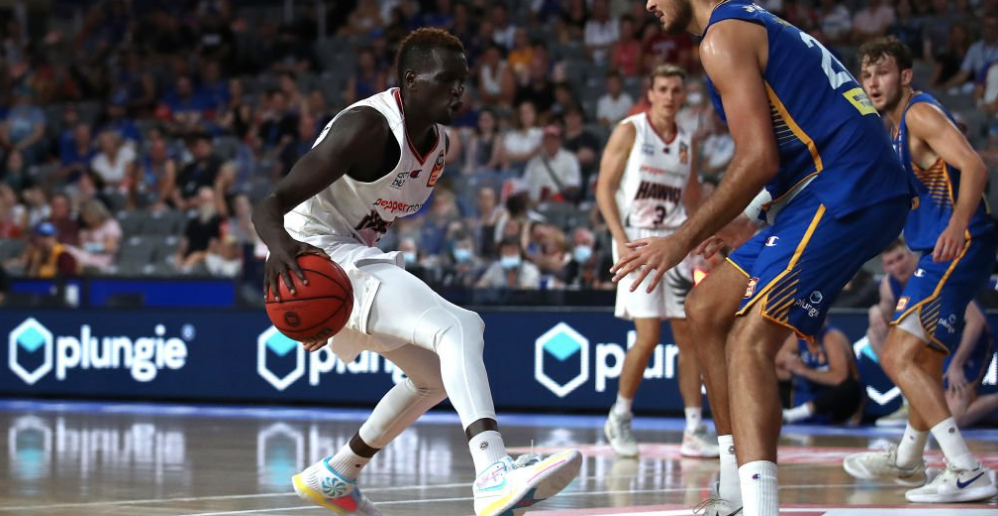 DESPITE an even first half that saw both the Brisbane Bullets and The Hawks tied at the midway point of last night’s contest, the Illawarra-based unit won out the remaining two quarters to collect their third straight win to start the 2021 season, outlasting Brisbane for a second time, 90-82.

Brisbane knew they had to bestow a strike to the Hawks’ spirit early on with a good opening period, and thanks to import Vic Law as well as the Bullets’ skipper Nathan Sobey, the hosts had themselves a strong 10-point lead after one, leading 23-13.

Furthermore, the Bullets’ ability to convert at the line played a huge part in creating what was a sizeable lead after 10 minutes, knocking down seven attempts from the charity strike during this time.

In what seems to be a reborn Hawks outfit, Brian Goorjian’s side would undo all of Brisbane’s hard work from the opening term tying things up 38-38 heading into the main break thanks to a running floater down the lane by Tyler Harvey, who grabbed his twentieth point of the contest at this stage.

It was the Hawks backcourt that moved the ball and worked hard on the glass in the second quarter, overtaking Brisbane in categories such as rebounding, assists and bench points – ultimately winning the period 25 to 15 and evening things up in the process.

Harvey continued his dominance to kick off the second half, nailing a triple and giving his side the lead. Next to occur, would be a series of baskets from both sides signifying a much more back and forth third term.

Andrew Ogilvy and Justin Simon continued to apply the pressure onto their opponents, extending their lead against Brisbane whenever the deficit became close. The Hawks would maintain a five-point lead for most of the third, as additional actors such as Deng Deng and Sam Froling started to make their mark.

Up 65-62 against Brisbane with 10 minutes to play, the visiting squad knew they needed to focus a little longer and convert on their chances if they were going to start their year with three wins in their opening three outings.

Having been the case for most of the matchup, the Bullets and the Hawks split the opening 14 points evenly amongst themselves, promising those at Nissan Arena a good finish to what had been a terrific game so far.

Willing his team back into the contest having trailed by as much as seven points, Sobey found his points in numerous scenarios as his side could not make up the margin that the Hawks had forced upon them.

Trailing by a single bucket with two minutes remaining, a layup and free throws by Emmett Naar and another floater from Harvey quickly extended the Hawks lead to a game-high eight points and all but polished off the Bullets in front of their home crowd once again.

Taking home yet another victory in what has been a dream start to NBL21 for coach Goorjian’s roster, it is safe to say last year’s wooden spooners are in exemplary form. In excellent form, particularly, was Harvey who concluded his performance with a game-high 31 points along with a pair of steals. Other valuable contributors to the Hawks’ efforts provided an abundance of support, especially Ogilvy (14 points, nine rebounds and four assists), Justinian Jessup (10 points, six rebounds and six assists) and Simon (nine points and nine rebounds).

For a disappointed Bullets side who actually shot a respectable 42 per cent last night, their captain could not bring the team to victory as Sobey finished with 24 points off of 40 per cent from the field. Law added another impressive stat line to his debut season in the NBL, stringing together a 16-point, 12-rebound and six-assist double-double. Meanwhile, Orlando Johnson was effective off the bench with 11 points.

Brisbane returns in Round 3 to try and earn its first win of the season against last year’s runners-ups, the Sydney Kings, who also sit in the same boat looking for their first victory of the 2021 campaign. The Hawks look to extend their unbeaten start to four games with another away contest, this time in Cairns against the Taipans on Thursday night.