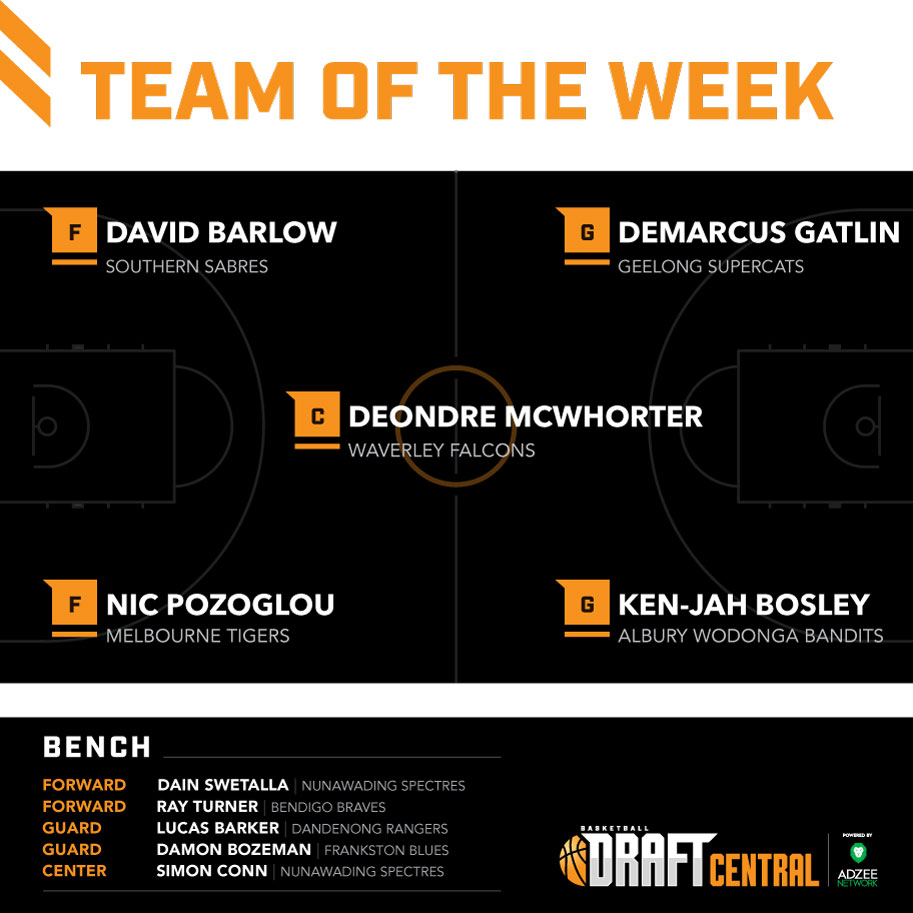 IN a new weekly piece, we announce a hypothetical Team of the Week for the National Basketball League (NBL)1 competition, with those who performed strongly across the weekend. In the first edition of the Draft Central NBL1 Men’s Team of the Week, the Nunawading Sabres have two players in the 10-man side, with eight other teams represented across the board.

Four players impressed across both games on the weekend, with Nunawading Spectres’ Dain Swetalla and Simon Conn both making the bench. Swetalla averaged 22.5 points and 11 rebounds, while Conn was impressive in the centre with 19.5 points and 12 rebounds across the two games. Lucas Barker also made the bench after two impressive games that saw hime set up his teammates, averaging 16.5 points, but also four rebounds and 5.5 assists. Bendigo Braves’ Ray Turner was also named on the bench after his 19.5 points 11 rebounds in the Braves’ two wins.

On the court, NBL players, Southern Sabres’ David Barlow and Melbourne Tigers’ Nic Pozloglou were named as forwards in the team of the week as they went about their business in their respective games. Barlow scored 22 points, 10 rebounds and five assists in the Sabres’ loss on the weekend, while Pozloglou delivered in a stunning performance with 25 points, nine rebounds and nine assists. For the guards, Ken-Jah Bosley was far and away the Player of the Week for his 37 points and seven rebounds as Albury Wodonga Bandits enjoyed a win, joined on the court by Geelong Supercats’ Demarcus Gatlin who produced 20 points, 10 rebounds, five assists and two steals.

In the center position is Waverley Falcons’ Deondre McWhorter who finished with 27 points, 14 rebounds and three blocks, while Frankston’s Damon Bozeman rounds out the Team of the Week with 33 points, six rebounds and two assists.