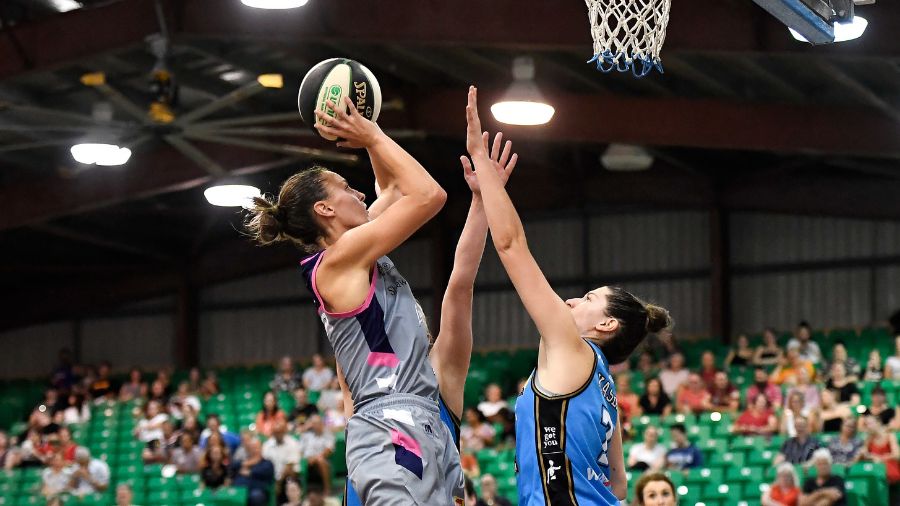 A STEPH Talbot inspired Adelaide Lightning outfit has upset reigning premiers University of Canberra Capitals in an overtime thriller last night. The opening match of the season did not disappoint with both teams neck-and-neck for the most part in a momentum swinging second half before the Lightning could secure the victory, 85-73.

The Capitals went into the match without co-captain Kelsey Griffin and had a new-look starting five with Keely Froling and Maddison Rocci leading the way alongside Mikaela Ruef. Jade Melbourne and Abby Cubilo who got some important minutes, whilst co-captain Marianna Tolo started on the pine. For the Lightning, the two key stars in Talbot and Chelsea Brook were on court, as well as recruits, Marena Whittle, Abigail Wehrung and Alex Wilson.

Despite having plenty of new faces, both sides showed they were able to compete at a high level in the first term with the Capitals going ahead by two points at quarter time. Once Adelaide gelled and Talbot started to get cooking, the Lightning advanced ahead by a solitary point at the half. The third term belonged to the “home” side as the Lightning piled on 24 points to 15 and pulled away to lead by 10 at the final break. With an upset in the works, the reigning champions pulled themselves off the canvas and back into the fight, roaring home with a 21-11 final term.

A Rocci layup with 79 seconds left on the clock levelled the scores at 70-70, and whilst both teams had a couple of jump shot opportunities, including the Lightning through Wilson with four seconds left on the clock, the teams could not be split after four quarters. The game went into overtime and Talbot was quick to add two points on the board. The teams were missing a few chances with the pressure sky high, but when Tolo pulled her side to within a point at 74-73 with 130 seconds left on he clock, there was barely anything to separate the sides.

Enter Talbot. Scoring eight of the last 11 points – a Wehrung triple was the other score – the Lightning stormed home to create distance on the Capitals and get up by 12 points, 85-73. In the end it was Talbot who was the difference for the Lightning, nailing 31 points, 13 rebounds, three assists, six steals and four blocks in a standout performance for her side.

The Lightning had five players reaching double-figure points in the win, as Wehrung (16 points, nine rebounds and three assists) and Wilson (15 points, four rebounds, six assists and three steals) both stood out. Chelsea Brook (10 points, two rebounds and one steal) was quieter than her usual standards, though shared the load with Louella Tomlinson (10 points, three rebounds, one assist, one steal and two blocks) who impressed off the bench.

For the Capitals, Rocci stood tall continuing her form from the Queensland State League (QSL), nailing 21 points, eight rebounds, six assists and three steals in an impressive game, well aided by Froling (19 points, four rebounds) who made the most of her 31 minutes before being fouled out which hurt the Capitals. Ruef (13 points, six rebounds and two steals) contributed as well, whilst Tolo came on and had 10 points, five rebounds and two steals in the loss.

TOWNSVILLE Fire’s new-look side certainly had plenty of polish as they claimed an impressive 73-48 victory over Perth Lynx in the second game at Mackay. Unlike the first down-to-the-wire match, this game was largely over by the third term as the Lynx struggled to score consistently.

Townsville came out with plenty of vigour, bursting out to a 25-10 lead at quarter time, before the Lynx ensured they were still in touch at the half, cutting the deficit back to 10. The third term saw Perth manage only five points for the entire quarter as the Fire piled on 15 themselves, then consolidated their win with a 23-18 final quarter to take top spot on the WNBL ladder midway through the first set of matches.

Neither side was massively accurate, but Townsville’s 38 per cent from the field certainly outshone Perth’s 27 per cent, with a 44 to 29 per cent from two-point range the key. The Lynx doubled the amount of three-point successes with six to three, but could only manage 4/13 from the charity stripe while the Fire put up 8/10. Townsville won across the board in most statistical areas such as rebounds (56-49) and assists (12-10), whilst having less turnovers (9-16). The Lynx were able to deny a number of attempts with big blocks (9-3), and then had more second chance points (16-12), though it ultimately was not enough.

An almost unrecognisable Townsville unit saw former Lightning scorer Lauren Nicholson put up 16 points in her first match for the North Queensland side, as well as four rebounds and two assists, well aided by young gun Shyla Heal who had 15 points, four rebounds and two assists. Megan McKay and Nadeen Payne were dominant in the five and four spots, combining for 19 points and 20 rebounds across the night. The much anticipated return of young gun Zitina Aokuso did not let the fans down, producing eight points and seven rebounds coming off the bench, and she could have been even more impressive finishing with 3/10 from the field.

Darcee Garbin was the only real scorer of note for the Lynx, with the former Fire talent able to hold her head high against her former side, recording a team-high 12 points, as well as six rebounds, three blocks and two assists. Captain Katie-Rae Ebzery had nine points, three rebounds and three blocks in the loss, but there were not enough points put up, with only 10 successful makes of a team total of 19 from the remaining players. Jessie Edwards (six points, five rebounds) and Emma Clarke (six points, four rebounds) gained some important minutes off the bench and worked hard.

Overall it was a team performance from the Fire in making the win possible to start their season off on the best possible note coming from wooden spooners last year.

Next up the four teams face off in opposite matches on Sunday, with Perth Lynx taking on Adelaide Lightning and UC Capitals facing Townsville Fire.