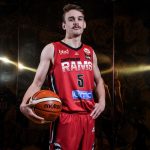 He was the shining light throughout the 2020 New Zealand NBL season for the Canterbury Rams. Britt was one source of reliable scoring and all-round security that coach Mick Downer could rely on from first tip-off to final buzzer. Many of his teammates went down with injuries, and the Perth Wildcats development player had to lift his younger teammates up and helped keep them strong through a tough 10-game losing streak. It helped them come good in the finals series, where the Rams were able to share the load and Britt was still able to contribute without the weight of knowing he had to do the bulk of it like earlier in the season.

Britt was simply sensational and unlucky not to make the All-Star Five. He worked hard throughout the season and ranked sixth overall for points for with 19.5 per game. He spent 27.7 minutes on the court which was the second least of the top 10 scorers, but he still averaged the 6.1 rebounds and 4.6 assists per game which gave him a terrific balance both offensively and defensively. Pair that with 1.3 steals per game and Britt genuinely had the whole package. His most deadly attribute was his free throw shooting where he made 4.0 of his 4.4 attempts per game at an elite 90.1 per cent efficiency. That ranked him second overall of those with more than one make per game, behind only Derone Raukawa. His two-point accuracy was just over 50 per cent, and while he was not as fluent from long-range, his tendency to be fouled allowed him to pick up points at the line.

One of the few to never drop into single-digit scoring, at one stage Britt had a 20-plus point streak going over three games on two separate occasions. He hit the 30-point mark twice, both of which came against the Taranaki Mountainairs. The first outing he shot at 60 per cent from the field on his way to a massive almost triple-double of 30 points, 10 rebounds and nine assists, before a slightly quieter – but still dominant offensive effort – of 31 points, four rebounds and one assist, but also had three steals. While he did not pick up more than 20 more points in his last six games he was able to still influence his teammates with much higher numbers of assists, and bring others into the game.