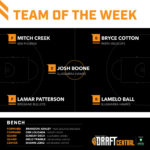 IN the hardest week thus far to try and pick just four guards for our Draft Central National Basketball League (NBL) Team of the Week for Round 6, it was cellar dwellers, Illawarra Hawks who had an impressive three players in the team. The Hawks won their second game of the season in impressive fashion, and were the only side this round to have three, with Melbourne United (two) the only other side to have multiple nominations. Five of the remaining seven clubs had a single nomination, while Adelaide 36ers and Cairns Taipans – who both went down in single game losses on the weekend – did not have a nominee this week.

Illawarra excitement machine, LaMelo Ball had his best game of the season, putting up 24 points, six rebounds, eight assists, three steals and one block, named alongside teammate and center Josh Boone, who finished with 15 points, nine rebounds, one assists, one steal and two blocks. Sunday Dech‘s best game of the season also saw him rewarded with selection on the bench. Boone’s former side, Melbourne United had Melo Trimble and Shawn Long both land on the bench, with the pair only narrowly missing out on starting spots due to the strength in the positions from the round.

Team of the Week regular, Bryce Cotton was named in the other starting guard position following his massive game on Sunday posting up 36 points, five rebounds, four assists and one steal for the Wildcats. The two other players that have been staples in the Team of the Week thus far are Lamar Patterson and Mitch Creek, both of whom fill out the starting five in the forward positions. Creek had 21 points, 11 rebounds and four assists in the Phoenix’s win over the New Zealand Breakers, while Patterson also helped himself to a double double with 22 points, 11 rebounds, seven assists, two steals and one block in the Bullets loss to Sydney.

Looking at the remaining two bench spots in that forward position, New Zealand Breakers’ Brandon Ashley and Sydney’s Didi Louzada both squeeze into the team for this round after strong performances. Ashley averaged a double double, the third forward to do so, which saw him only land on the bench. There was no shortage of contenders for the team this week with New Zealand regular Corey Webster and debutant Glen Rice Jr both thereabout, as was Melbourne United’s Chris Goulding, Sydney’s Casper Ware and Brad Newley, South East Melbourne’s Dane Pineau and Jaye Crockett, Perth Wildcats’ Nick Kay and Cairns Taipans’ Cameron Oliver.