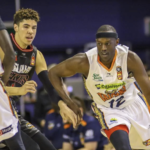 NEWCOMERS South East Melbourne Phoenix have joined three of last year’s National Basketball League (NBL) finalists in the top four following two rounds of action. While New Zealand Breakers are yet to play a game due to their NBAxNBL pre-season games in America and Adelaide 36ers have played just the one match so far, it is just the three teams that remain undefeated with the Phoenix joining reigning premiers Perth Wildcats, and finalists Sydney Kings in the top three spots. In the standalone Monday night game, Illawarra got its season going with a late free throw to win in a one-point thriller over Cairns.

Brisbane started its weekend with a second consecutive victory to temporarily take top spot, coming from four points down at the main break to run away with a 16-point win at home over Cairns Taipans. The all-Queensland battle saw the Taipans take the early lead by three at the first change and extend that to four by half-time. Brisbane then showed what it was capable of in the third quarter, piling on 31 points to 14 in the third quarter, before finishing off the game strongly, 14-11 in the final term. It was the second half defensive effort that restricted the Taipans to just 25 points for the entire half – after 24 and 25 in the first and second quarters respectively – that won the Bullets the game. Nathan Sobey was back to his best with a game-high 21 points, five assists, two rebounds and a block for Brisbane, well aided by Matt Hodgson who backed up his Round 1 effort with 14 points, four rebounds, two steals and three blocks, shooting at 100 per cent from the floor. EJ Singler was handy off the bench with 10 points, two rebounds and a game-high four steals. Lamar Patterson did not have as much impact on the scoreboard as in Round 1 with just seven points, but he still contributed with six rebounds, four assists and a steal. For the Taipans, Scott Machado picked up 16 points, 10 assists and two rebounds in a double-double effort, while Cameron Oliver (16 points, seven rebounds but seven turnovers), Majok Deng (14 points, five rebounds, two assists and two steals) and Mirko Djeric (14 points, five assists) also were strong offensively.

Perth Wildcats retook top spot on the table with a 27-point victory over Illawarra Hawks, handing the Hawks their second straight loss to start the season. The Wildcats looked completely dominant across the first three quarters, showing why they are the team to beat in season 2019/20, sinking 84 points to the Hawks’ 56 to end the game with a quarter to play. The Hawks managed to win the final term by a point, but it was too little, too late with Perth establishing itself as even more damaging at RAC Arena. While all the talk pre-game was about LaMelo Ball, Perth star Bryce Cotton reminded everyone what he was capable of, sinking 28 points, having seven assists and four steals, while partner-in-crime Terrico White helped himself to 19 points, six rebounds and three assists. Dario Hunt had 16 points and nine rebounds, while Nick Kay (nine points, seven rebounds) and Majok Majok (eight points, eight rebounds) were prolific off the boards. Ball still stood out with 15 points, eight assists, three rebounds and three steals as arguably the best for his side, along with David Anderson (14 points, four rebounds and two blocks) and Josh Boone (10 points, 12 rebounds and two steals).

For the third time in two days, the NBL had a different ladder leader, with Sydney Kings taking up the top spot on the table after defeating Adelaide 36ers at home. It was Adelaide’s first game for the season after playing in the United States, and the start looked like jet lag might have got to them with the red-hot Kings sinking 30 points to 14 to take a very handy 16-point lead into quarter time. They extended the lead in each break to 17, 21 and finally 22 points in a four-quarter effort to send a message to the rest of the competition in the 102-80 victory. Brad Newley was the top shooter for the Kings with 18 points, six rebounds and three assists, while Jae’Sean Tate was again prominent with 16 points, six rebounds and four assists, while Daniel Kickert also had 16 points accompanying two rebounds and two assists. Casper Ware (10 points, five rebounds) contributed despite shooting at just 25 per cent, while Andrew Bogut was relatively quiet with eight points, four rebounds and three assists. Shaun Bruce had a team-high seven assists to go with four rebounds, while Craig Moller had 12 points and four rebounds off the bench. For the 36ers, Daniel Johnson was the clear standout player with 26 points and seven rebounds, while Jerome Randall returned to face his former side and helped himself with 16 points, three rebounds and five assists. Ramone Moore (10 points, four rebounds and two assists) and Anthony Drmic (10 points, four rebounds and three steals) were the other two 36ers’ to reach double-figure points.

In the battle of two undefeated sides, South East Melbourne Phoenix got the chocolates in their first ever home game, defeating Brisbane Bullets by 20 points to leapfrog the Bullets. The visitors took a two-point lead into quarter time, before the Phoenix regained control in the next term courtesy of a 32-25 quarter. They extended the lead by a further seven points with a 31-24 term, before finishing off the game with another dominant quarter, scoring 27-19 on their way to a comfortable 20-point win. John Robertson powered to 30 points, two rebounds and six assists with a remarkable 71.4 per cent from the field, including an eye-opening nine from 11 from three-point range. Kendall Stephens was even more accurate, sinking 17 points at 75 per cent from the floor, while making five of seven from three-point range. Mitch Creek was still remarkable overall, sinking 25 points and having seven rebounds, seven assists and three steals to be best on the court for the second straight week, while Ben Madgen had a strong game with 13 points, nine rebounds and four assists. For the Bullers, Patterson backed up his Round 1 effort with 30 points, four rebounds and three assists, while Sobey was strong again with 15 points, six rebounds and seven assists. Off the bench, Will Magnay (13 points, five rebounds and one block) and Singler (10 points, five rebounds, two assists and one steal) were prominent despite the loss.

In a battle of two sides with a couple of losses already to their names, it was the Illawarra Hawks who claimed the narrowest of victories over Cairns Taipans at WIN Entertainment Centre. The home side narrowly escaped the game going into overtime courtesy of an AJ Ogilvy free throw with 1.1 seconds left on the clock in the fourth. Cairns started strongly to lead the Hawks by five at quarter time and half-time, before the home team hit back with a 28-17 third term to regain the advantage by six heading into the final term. Cairns again regained control to win the term by five in the last quarter, and the game looked set for overtime, before Ogilvy delivered from the free throw line. The point moved Ogilvy to 19 for the game, as well as six rebounds, five steals and two assists in a massive effort. Aaron Brooks (19 points, five rebounds and seven assists) and Todd Blanchfield (20 points, three rebounds and two assists) were also prominent, while Ball showed his talent in spurts with nine points, five assists and five rebounds. For the Taipans, Deng battled hard on his way to 17 points, five rebounds, two assists and two steals, but it was the return of D.J. Newbill who played his first game of the season, posting up a game-high 26 points, as well as three rebounds, four assists and a steal. Cameron Oliver (14 points, seven rebounds) and Machado (14 points, three rebounds, six assists and two steals) were the other players who tried hard throughout the contest.