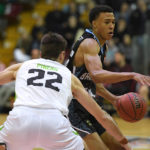 THE New Zealand Breakers will make their first appearance in NBL 2019/20 as Round 3 marks the first round all teams will be in action. We take a look at the seven games across the weekend.

The round opens with the Kings and Breakers going head-to-head in what will be the Breakers’ first NBL 2019/20 match of the season. The Breakers are coming off two games in the United States as part of the NBAxNBL pre-season program, and with the hype surrounding 2020 NBA prospect RJ Hampton, they will be hoping to make a statement against one of the championship favourites. Both the Breakers and Hampton struggled against the Memphis Grizzlies and Oklahoma City Thunder, but a fresh start against the juggernaut that is Sydney could set them on a path to the championship this season. Sydney meanwhile have lived up to expectations so far this season, accounting for both the Taipans and 36ers to open up their 2019/20 season account in ideal fashion. New recruit Casper Ware’s transition from United to the Kings has been the spark the Kings may have needed all along, while Andrew Bogut, Brad Newley and Kevin Lisch have all been outstanding and are a big reason as to why the Kings will go in as favourites to defend their home court tonight.

The Wildcats are one of the three undefeated sides left in the competition and will be favoured to extend that streak when they host the winless Taipans. Unfortunately for the Taipans, after the two rounds they seem to have come back where they left off from last season, which saw them win just six games. They faced the Bullets and Hawks last round, and despite getting smashed by their state rivals, they bounced back strongly against the Hawks and fell by just one point. D.J. Newbill and Majok Deng starred for their side in the loss to the Hawks, and they will need to repeat their strong performances if their side is any chance to knock off the Wildcats at RAC Arena. Bryce Cotton and Terrico White, along with Nick Kay have been standouts for Perth, and all will be looking to feast on the winless Taipans in the later game tonight.

The 36ers made their first appearance in NBL 2019/20 last week and will be looking to breakthrough for their first win when they face off against the Bullets. Adelaide fell convincingly to the Kings last weekend but Daniel Johnson and Jerome Randle proved their worth, with Randle marking his return to the 36ers with a strong outing. Both will need to be at their best against the Bullets, who lost their first game of the season against South East Melbourne last Sunday. Brisbane had beaten the Hawks and Taipans in the Bullets’ first two games, but fell to a three-point happy Phoenix who simply torched them to hand them their first loss. Lamar Patterson was the lone star for the Bullets after his 30-point haul against the unbeaten newcomers, and his season has been exceptional to date which he’ll be undoubtedly looking to extend against the 36ers on Saturday afternoon.

South East Melbourne will welcome the Hawks for their second home game as the newest NBL side will be looking to extend their unbeaten start to their first season as a club. Thanks to John Roberson’s stellar 30-point outing, which included draining 9-11 from beyond the arc, the Phoenix made light work of the Bullets last weekend to make it two wins from their first two games. Mitch Creek has also been instrumental for the Phoenix, all in the absence of Tai Wesley who’s injury replacement was named early this week as Jeffrey Crockett. The Hawks on the other hand have had a mixed start to their season, losing their first two games before breaking through by a solitary point against the bottom-placed Taipans last Sunday. Todd Blanchfield, Aaron Brooks and AJ Ogilvy all put in big performances to ensure they wouldn’t go into this weekend still without a win, and if they are to upset the unbeaten Phoenix, they will all need to have big outings in Melbourne.

The Breakers and Kings will lock horns for the second time this weekend, with the Kings this time having to play away in Auckland at Spark Arena for what will be New Zealand’s first home game of the season. It will also be the Breakers’ second game of the season, and will be hoping the likes of Hampton, Tom Abercrombie and Corey Webster all have strong outings as they’ll be hoping to come away from this weekend with at least one win. For the Kings, they’ll be hoping for a win on their home court on Friday night and that this matchup will mark the opportunity for them to make it four wins from as many games to kick off their season in the perfect way.

United will be looking for their first win of NBL 2019/20 when they host their Wildcats on Sunday. Melbourne hosted their cross-town rivals South East Melbourne in the season opener in Round 1, but they fell by three points and had to face off against two NBA opponents in the NBAxNBL pre-season program last weekend. They lost to both the LA Clippers and Sacramento Kings, but Chris Goulding, Melo Trimble and Shawn Long all impressed across the two games and will be all hoping to build on that to get United’s NBL campaign back on track. For the Wildcats, it will be their second game of the round and if they are to do what is expected and account for the winless Taipans on Friday night, they’ll be hoping for a win against United to extend their unbeaten start to the season to four games.

In the final game of the round, the Hawks and 36ers lock horns on Monday night in what will be both sides’ second game of the round. The Hawks will be looking for their second win of the season on Saturday night against South East Melbourne, while the 36ers will be looking for their first against the Bullets who they host on Saturday afternoon. Regardless of the results of their early Round 3 matchups, both will be eagerly hoping for a win when they clash on Monday night, as the result of this match presents a great opportunity for both to kickstart their seasons and chase a place in the top four.