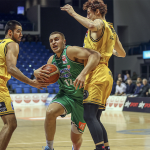 MANAWATU JETS are next up in our team-by-team review series of the 2020 Sal’s National Basketball League (NBL) Showdown. The Jets finished second on the ladder and backed up their regular season with an impressive finals series to reach the decider and only agonisingly fall short of glory. We take a look at their season.

There were plenty more wins that might have been better in terms of quality difference, but the win against the Airs was one that would have been relieving for the side that lost the last three games heading into the do-or-die semi-finals clash. A topsy-turvy contest, the Jets led by 11 points at quarter time, but found themselves trailing by three at the final break, before steadying with a dominant 38-25 final term to win 105-95. Tom Vodanovich stepped up to record 28 points, seven rebounds and an assist, with Taane Samuel’s 23 points, five rebounds and four assists also impressive. Hyrum Harris did his thing in a clear standout performance of the night though, almost picking up an unheard of quadruple double thanks to 17 points, 11 rebounds, seven assists and seven steals. Jayden Bezzant (17 points, five assists and three steals) and Ashton McQueen (11 points, three rebounds and four assists) were also busy.

There was only one it could be, and it was not for lack of effort nor intensity, but rather the stakes and knowing they came so close to taking home the 2020 Sal’s NBL title. Entering the grand final against Otago Nuggets, the Jets were 0-4 so not many expected them to change that, but they showed up on the night, turning it on from early to lead by two and four points at the first couple of breaks. The Nuggets stayed with them and cut the deficit to three by the final change, then the ladder leaders finished stronger with a 27-22 final term to win 79-77. Jordan Hunt (21 points, seven rebounds), Josh Aitcheson (16 points, six rebounds), Kane Keil (15 points, seven rebounds) and Jordan Ngatai (11 points, six rebounds) helped the Nuggets dominate off the boards, as Vodanovich (24 points, 10 rebounds and four steals) and Harris (19 points, 12 rebounds, four assists and three steals) did all they could to sway the momentum.

The Jets put themselves in a title-winning position with a fairly consistent season, always being thereabouts. They had the point-scoring and rebounding machine in Vodanovich who won the league’s Most Valuable Player (MVP) award, as well as Harris who was the only player to pick up a triple double in the competition. The late inclusion of Kirksey was a good one, and they almost went all the way to the title, but could not quite get there.

Realistically, they just could not beat the Nuggets. While they were strong against all the other sides, no matter the lineups, the Nuggets had them when it counted. Five matches, five losses, and it was arguably the one side the Jets did not want to face in the final. They got close and almost upset them, but were pipped at the post.

Manawatu Jets can be proud of their efforts in 2020, especially considering they have struggled in recent years. They drafted well, used the combinations effectively, and the key will be whether they can keep these combinations together in future years when the other teams return. If they can, then watch out, but the Jets have some quality coming through for the future years as well.