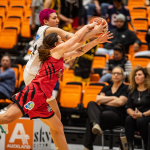 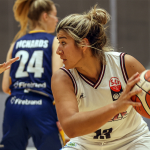 THEY did not have it all their own way, but one of the New Zealand National Basketball League (NZNBL) 18IN18 title favourites in Harbour Breeze were able to maintain their intensity for longer and step up when it counted to post an important win over Otago Gold Rush. The 11-point win (58-47) allowed the Breeze to move to 2-0 for the season and join Auckland Dream as the other undefeated team thus far in the condensed season, needing all four quarters to finally shake off the fresh Gold Rush.

Coming off an impressive win the night before, Harbour Breeze started with a triple 90 seconds into the contest off the hot hands of Ashleigh Kelman-Poto to get them going. Zoe Richards responded a minute later to become the first official Gold Rush scorer in the 2020 season. A mistake-riddled first term saw few shots being made and a number of fouls being handed out, before Savanna Handevidt produced back-to-back free throws to nudge her team ahead 4-3. Jazzmyne Kailahi-Fulu responded a mere five seconds later off another foul, and midway through the term, the score was 5-4 in favour of the Breeze.

It picked up a little more in the final three minutes as Gabriella Fotu hit an important layup, but Tara Clement and Richards responded again and Gold Rush had the lead back. Clement’s two free throws extended that to three, which was quickly negated by an impressive Keeley Tini triple with less than two minutes on the clock. Scoring five consecutive points, the Gold Rush looked to be in firm control at 15-10 with 28 seconds remaining on the clock.

Unfortunately for the Gold Rush, a two-point jumper by Olivia Bell with two seconds on the clock, and then another layup, this time from Jessica Moors in the first 15 seconds of the second term cut the deficit to just one. Once again scoring was scarce in the first half of the quarter, as Kailahi-Fulu put her second lot of points on the board to tie the scores for the Breeze, before Moors got to the basket to hand her team the lead midway through the quarter.

Another 90 seconds off the clock and neither team could score credit to the defensive pressure, before Kelman-Poto headed to the charity stripe and pushed the Breeze’s lead out to a two-possession game. Richards and Te Araroa Sopoaga responded, with the latter’s three-pointer with 99 seconds left in the term hitting the front, only for Tini and then Foty to respond and the Breeze were back in front by free at half-time.

Not willing to let the game slip, the Gold Rush had the first eight points on the board, with Richards contributing four and not allowing the Breeze a score in the first three and a half minutes. Though as the good teams tend to do, the Breeze – this time through Fotu – found a way – and back-to-back layups from Fotu gave her side the lead in the blink of an eye.

A few minutes later Brooke Blair scored her first points of the night after a big evening the night before thanks to a three-pointer, but the Gold Rush kept coming. The teams traded blows with Tini, Tiarna Clarke and Kailahi-Fulu all adding baskets to push the lead out to a game-high six points. Not much in it at the final break, a Lisa Wallbutton layup with 10 seconds to go, an cut it to three, but it could have been even tighter with Wallbutton missing the And-One chance, then picking up the offensive rebounds but missing the jump shot allowing Moors to hold onto possession in the dying seconds.

Handevidt scored the first point of the final term with one of her two free throws, but the second miss would hurt as Fotu continued her hot streak with another couple of baskets and the lead was back out to six. Unlike the first three quarters, there was plenty of scoring in the first few minutes as Wallbutton hit back-to-back baskets either side of a Zara Jillings miss, and the Gold Rush were within two.

A series of attempts from Richards – where she picked up three offensive rebounds, had two shots and passed two other opportunities off – could not yield a score, and then Fotu drove the dagger in further with a great pass to an open Tini who nailed a triple and the lead was out to five with six minutes on the clock.

The Gold Rush again came hard, getting within two points with four minutes on the clock, but Blair was beginning to become a problem, answering each opposition basket with one of her own. When she dished off a dime to Tini for another three-pointer, the game was looking out of reach for the underdogs. It was fitting that after another series of chances from the Gold Rush that could not result in scoreboard pressure, it was Blair and Tini, off deliberate fouls, that officially put the final nail in the coffin as the lead went out to 12. A Richards jump shot in the last 10 seconds cut the final margin to 11, but it was the Breeze standing up in the final five minutes of the game that was the difference.

Tini’s long-range game yielded her the most points with 15, which saw her make four of seven from long range and pick up two rebounds off the bench. Fotu was a standout with 11 points and seven rebounds, while Blair was clean with a big second half including 11 points, three rebounds and three steals. Jillings’ shooting might have been off – none of 10 chances from the field – but she still was a solid contributor with seven rebounds, three assists, two steals and three blocks. Kelman-Poto (five points, six rebounds and three blocks) and Kailahi-Fulu (seven points, four rebounds and two steals) were both impressive.

For the Gold Rush, Richards hit 12 points, and could have been even more with just six of 18 from the field, but she was able to record eight rebounds, two assists and three steals on the night. Wallbutton off the bench was a standout with 10 points and 13 rebounds, while Sopoaga notched up eight points – only one from eight from the field – and had seven assists, five rebounds and two blocks. Handevidt also stood tall around the basket with seven rebounds to accompany her nine points.

The Gold Rush will look to bounce back tonight when they take on the similarly placed 0-1 Waikato Wizards, while the Breeze now set their sights on Canterbury Wildcats on Thursday.