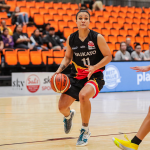 WAIKATO Wizards have booked a semi-final spot in this year’s New Zealand National Basketball League (NZNBL) 18IN18 competition following a dominant finish to their final match against Capital Swish. The two sides were level at half-time, but the Wizards – who needed a win to guarantee themselves a semi-final spot – piled on 45 points to 21 in a stunning second half to run away with the contest, winning 78-54 and leapfrogging both the Swish and Auckland Dream.

With a semi-final spot on the line, both teams were even across the first half, as Letava Whippy nailed her first two free throws for the opening points on the board for Capital Swish. In an immediate response, Kayla Manuirirangi hit a triple for her side to regain the lead, and the teams traded baskets over the first couple of minutes. Grace Simi Vaofusi and Matangiroa Flavell both produced impress jump shots, with reliable scorers Esra McGoldrick and Paris Lokotui also answering each other for the scores to be level midway through the term.

For every Wizards basket, the Swish answered and vice-versa. With 1:40 on the clock, Flavell nailed a three-point jump shot for the Wizards to go ahead, and Makayla Daysh scored one of two free throws in the final minute for a two-possession game. When the game looked to be winding down in the final 30 seconds, Grace Gordon hit an important step back jumper for the Swish and cut the quarter time deficit to just one with 24 seconds remaining.

Straight out of the blocks in the second term, Sariah Penese hit a triple for the Swish and they regained the lead. The game was busy with three-pointers in the first 12 minutes as Manuirirangi hit a three-point jumper of her own and the Wizards were back in front. The lead did not increase more than three points through the middle of the term, as Dalen Pilitati responded to another Manuirirangi jumper with a game-tying triple with 4:12 on the clock.

After the Wizards held the lead for most of the term, the Swish hit the front following four consecutive points from Jyordanna Davey and Whippy to move one point ahead with 2:35 remaining in the half. The teams again traded baskets, with the Wizards having a lot of late chances, and just as Alana Paewai put her side up by three with a long-range make, Davey answered with 26 seconds on the clock to tie the game at half-time.

Unlike the nail-biting first half, the second half was a complete counter contrast. The Wizards hit the front with a triple from Flavell after plenty of misses from both teams in the opening two minutes, only for Flavell’s three-pointer to be answered by Lokotui’s layup. Another dry spell over the next few minutes saw neither team able to capitalise, but then Daysh came onto court and made a layup and the following And-One chance, with Arielle Parai extending the Wizards’ advantage out to a game-high six points.

Vaofusi managed to cut it back to four with successful free throws six minutes into the term, and whilst the Swish were as close as two points with 1:45 on the clock, they could not seemingly hit the front. The final two baskets of the term went in favour of the Wizards with Jayzelee Waihi’s layup and Paewai’s triple putting it out to seven, before a single free throw from Lokotui with nine seconds on the clock reduced the Swish’s deficit to six at the final break.

Waikato Wizards used the momentum from the third term to storm away with the game in the final term as Waihi’s triple and a Zarya Poulava layup handing their side a double-digit lead for the first time in the game just a minute into the quarter. It triggered a dominant run of 13-straight points with Daysh scoring the last four of them and by the time she hit a jumper with 5:41 on the clock, the Wizards were out to a 19-point lead, 62-43 and it was game over.

To that point, the Swish had not scored, and in fact it took until 4:43 into the term for Davey to get to the basket with a layup, and by then the damage was done. Lilly Taulelei came on and hit some important points late, though the Wizards through Manuirirangi and Daysh did not stop pushing and the pair blew the lead way out to 26 points, with Lokotui’s final layup with 15 seconds on the clock putting the final Swish deficit at 24, and the Wizards booking a semi-final spot with a 78-54 victory.

The Wizards were just dominant across all areas, but the most telling stat was their ability to hurt the Swish on turnovers, scoring 33 points to 14 off the Swish’s 24-20 turnovers. The Wizards also smashed them in the rebounds (50-36), assists (15-8) and second chance points (18-7), whilst sitting at a higher percentage from the field (40 to 32 per cent), and nailing a whopping 10 triples to five.

For the Swish, Whippy racked up 15 points, six rebounds and a steal, teaming up with Lokotui (10 points, five rebounds, two assists, four steals and a block) on the offensive end. Te Huinga Selby-Rickett missed all five field goal chances, but she did record nine rebounds as well as two steals and two blocks. Taulelei (three points, six rebounds) and Davey (eight points, three blocks) both provided some strong defensive pressure in the loss.

With one game remaining in the season, both teams will play finals, as the Wizards currently sit second and the Swish in fourth. 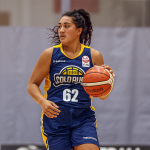 OTAGO Gold Rush remain in contention for a New Zealand National Basketball League (NZNL) 18IN18 semi-finals spot after toppling Capital Swish by 10 points. A night after Capitals Swish toppled reigning premiers Auckland Dream by that exact margin, the Swish were on the back foot, trying to get back into the game after falling as much as 15 points behind. While they won the last term, it was a case of too little, too late and the Gold Rush got up, 58-48.

Otago’s Zoe Richards started the night with the first basket, and quickly made it two after a response from Swish’s previous night hero, Grace Simi Vaofusi. The Gold Rush got out to a four-point lead with Lisa Wallbutton and then Richards (up to six points), either side of Letava Whippy free throws. Back-to-back baskets for the Swish through Lilly Taulelei and Grace Gordon resulted in their side hitting the front with four minutes on the clock.

A lower scoring second half of the term saw just seven points scoring, with four of them coming from Savanna Handevidt, with her last basket putting her team in front with 11 seconds remaining in the first term. That momentum carried into the second as Bronwyn Kjestrup, Wallbutton and Te Araroa Sopoaga all scored in the opening two-and-a-half-minutes, with Wallbutton adding both her free throws not long after. Since being 8-9 down late in the first term, the Gold Rush had scored 13-2 and were now 10 points up three minutes into the second.

Grace Gordon broke the drought for the Swish, scoring moments later, then Maia Jean Watene made it back-to-back baskets for the Swish since midway through the first quarter. Sensing the momentum was turning, Sopoaga took it upon herself to get aggressive at the basket, making three consecutive layups, and by the third time copped contact off Gordon and then made the And-One chance.

The lead was out to 13 points with three-and-a-half minutes left in the quarter when Handevidt hit a jumper, and despite Te Huinga Selby-Rickit making back-to-back jumpers for her side, the Swish were on the back foot. Taulelei and Selby-Rickit cut the deficit to seven in the final minute, with the latter now up to six points, before Tara Clement scored a timely layup with 15 seconds left on the clock for a nine-point lead at half-time.

The first basket of the second half was always going to be important, and it was Handevidt who hit one of her two free throws to make the margin double-digits. Watene responded two minutes into the quarter, before Richards and Hayley Gray – the latter was fouled whilst taking a long-range shot – blew the lead right out to a game-high 13 points. Samantha Jenkins responded for the Swish with a triple of her own, but despite the Swish getting within nine points, yet another triple, this time from Richards, as well as a layup from Handevidt had the margin back out 15.

With less than three minutes on the clock, the Swish needed to do something, and Taulelei hit a vital jump shot, but her side could not hit the range, with Olivia O’Neill the only other player to score in the final two minutes, extending the Gold Rush’s advantage out to 15 at the final break, 46-31.

Needing an immediate response, the Swish had one through Sariah Penesse‘s triple in the opening 12 seconds of the match. The deficit was back to 12, but for every move the Swish made, the Gold Rush had answers, be it long range bombs, or getting to the basket and heading to the charity stripe. When Clement hit a three-point jumper with four-and-a-half minutes on the clock, the game looked to be in the Gold Rush’s keeping.

Both sides held up defensively, and whilst the Gold Rush only hit two free throws in the final minutes – and the Swish piled on seven points – the job was done and Otago celebrated a season-defining 10-point win, 58-48 to remain in the semi-finals hunt.

Sopoaga hit a match-high 15 points, as well as eight rebounds, while Richards also managed 11 points, eight rebounds, four assists and two blocks. Handevidt knocked down nine points, as well as six rebounds and four steals, while Wallbutton was productive off the bench, racking up a match-high 12 rebounds to accompany her even points and three assists.

For the Swish, Whippy was the dominant player off the boards with seven points, 11 rebounds six assists and four steals while Selby-Rickit was the other player who had an impact with eight points – six coming in that second term – as well as eight rebounds and two steals. Taulelei scored six points and six rebounds in another strong effort for the losing side.

The Gold Rush will have another chance to cause an upset when they go head-to-head with Auckland Dream tonight, while the Swish must defeat the Waikato Wizards on December 3 if they are to play in the semi-finals.